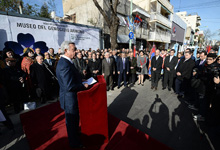 Dear compatriots, Honorable Chief of Staff of the Government of City of Buenos Aires, Your Eminencies, Ladies and gentlemen,

I consider it a great honor to be present here today, at the heart of Buenos Aires, and lay the first brick on the foundation of the Armenian Genocide museum together with you.

This museum is being built in order to fill up the ranks of the numerous monuments dedicated to the Armenian Genocide which extend from East to West and from North to South as a vivid testimony to the fact that no matter how much time has passed we will keep on remembering and demanding. Human memory is a sort of a historical sieve which with special gratitude keeps those names and place names, which always sow seeds of justice and push forward the noblest universal values.

One of these bright place names is Argentina who gave a helping hand to our people in hard times, saved not only hundreds of thousands of Armenians, but also restored our people’s broken belief in the fact that man was created to resemble God and that the human being can’t die in man keeping the barbarian alive.

Next year is the 100th anniversary of the Armenian Genocide. However, it is a well-known fact that the statutory limitation can’t be applied to the crimes against humanity. The 100th anniversary of Mets Yeghern is not an endpoint; it is just a unique destination. The centenary will sum up a historical period and will herald a new phase of fighting for the restoration of justice which will be supplemented with new methods of fighting against denialism. We are going to be more powerful, powerful together with the international community since the secret of power and the victory of justice is unity.