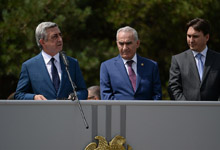 Today, of course, is a significant day for us. It is significant in the sense that we have gathered to celebrate the 20th anniversary of the foundation of the Military Institute after Vazgen Sargsyan, to confer the first officer ranks to the alumni of the educational institutions and to mark the graduation of the senior level command and staff studies by the first stream of officers.

The Military Institute after Vazgen Sargsyan is an educational complex which is indeed of great historic importance for us. Founded in the wake of the victorious Artsakh war, it heralded the accomplishment of the Armenian people’s old dream to have its own forge of military cadres. I can recall the multidimensional army command college – the future military institute – taking its first infant, but solid steps during the distant days of summer 1994. These were the days when the necessary educational and material base was in the true sense of the word one-by-one collected from all the sub-units of the armed forces having completed the war, when we toured all the highest state educational institutions in order to recruit the academic staff, when we chose the best officers having survived the hardships of the war in order to expand the command staff, and the first stream students were forced to spend as much time on the construction works of the newly-created building of the institute as on studying. This is the fate of Armenians: to construct and learn simultaneously and to create and struggle in order to defend their rights to live under the sun with boldness, intelligence and diligence.

Today, 20-year-old patriotic and devoted officers – the backbone of the military education of the Armenian army – are year after year recruited to our armed forces and together with the Military Aviation Institute after Armenak Khanperyants ensure the entrance of skilled and experienced officers tempered in their native atmosphere into the ranks of the Armenian army. In addition, it is worth mentioning that for the first time our armed forces are recruiting female officers in the person of these three female professional officers – the alumni of the military aviation institute - present here. This is the testimony to the growing role of Armenian women in the process of defending our homeland.

I congratulate all the young alumni of the military-educational institutions and wish you to bear the cherished rank of an Armenian army officer and carry out your mission honorably. Be it an activity of defending our borders or everyday fighting trim, remember that you are professional officers who should give a lead to others and embrace such eternal values as Honor, Duty and Homeland. Never retreat, since you will always feel the physical and spiritual support of your comrade-in-arms, higher command, the entire system of government of the Republic of Armenia and all Armenians.

In particular, I would like to congratulate the first alumni of the senior level command and staff studies. You are aware that you will be the link between today’s young officers and the supreme leadership of the army. Thus, I wish you to vigorously utilize your modern knowledge and skills in all the functional areas of the armed forces and to become pioneers in modern fighting arts, planning, management, governance, leadership and the best practice of military ethics.

I am confident you realize that the selection of the place of today’s ceremony is not an accident. By gathering at this sanctuary and bowing to the eternal memory of the innocent victims, we are also sending a clear message to all the adversaries of our people and statehood that the times when the oppressors of Armenians were left unpunished have passed. To our enemy who snipes at us, wants to infringe upon us behind our back and is planning a full-scale military operation against us we say: “Be careful, this is the Armenian world where you will find your end.” And I am grateful to you that you have chosen an officer specialty and have consciously and devotedly become the adherents of these commandments and the ones who follow them in work and deed. However, I am ordering and asking you, boys, to do everything and to become a hero not by means of losing your own life but by neutralizing the bandits breaking the peace of our world. The homeland really needs you.

I wish you good luck in joining the ranks of our glorious armed forces which are in the focus of the struggle between civilization and barbarism, light and darkness. I wish you good service and let God help everybody succeed.