Remarks by President Serzh Sargsyan at the Ministry of Defense 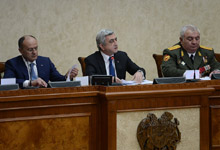 Prior to listening to your reports, I would like to say a few words.

At the outset I would like to note that the year started off with tension and we have witnessed numerous offensive actions of the adversary. We suffered sore losses for which we mourn together with the families and relatives of all the fallen. I believe nobody doubts that Azerbaijanis will pay dearly for each life of our fellows: they have paid dearly, they pay dearly today and in the future it will remain the same.

The objective of the adversary’s offensive actions is obvious. Azerbaijani authorities do not hide their intention to provoke permanent tension around us by combination of political and military means. It is a banal policy of blackmail whose main addressee is not we as much as the international community. Failing all-out in the peace negotiations because of its preposterous policy of “everything should be mine only,” official Baku tries to demonstrate what it can do unless all its whims are met, without understanding and seriously analyzing how severe may be consequences of that just for itself. Moreover, every time when a problem arises or painful event occurs in Armenia, Azerbaijan thinks that the happy hour has come to demonstrate itself on the frontline.

All for nothing. 25 years ago, being entangled in a more complex situation, we witnessed their nonsensical statements and appetite. I believe that the majority of the people gathered here remember well their menacing talk of the early 90s threatening to raise an Azerbaijani flag over Stepanakert. One of them went so off the handle as prattled of washing his boots in Sevan, and after Shushi they kept repeating every week that soon they would drink tea in Shushi. We witnessed all of that. We did not threaten them but we prevailed on them in the battlefield. Today, we stand much more firmly, more firmly than ever.

We have no reason whatsoever to instigate a war. We do not instigate incidents on our own initiative. You are perfectly aware of it. And we never attack first. We do not need it at all.

However, any incident directed against us has been followed and will be followed by an action of retaliation. Until recently, the response actions of ours have been symmetric in form and asymmetric in terms of inflicting more damage.

From now on actions of retaliation asymmetric in form may also take place. The hotheaded have to expect countless surprises. Furthermore, in case we register a larger and more threatening accumulation of forces across our borders and the line of contact, we reserve the right to commit a preemptive strike.

Let nobody think that we are going to sit around idly until the calamity enters our home. We are ready to be relentless towards the one who is cooking a calamity for us. I repeat it again: adventurism of our vis-à-vis will force us to embark on the path of causing irreversible damage.

We understand that Azerbaijani authorities are ready to mercilessly send hundreds and thousands of citizens to die only to hold on to their chairs. However, we cannot tolerate it and let it happen at the cost of our citizens’ and soldiers’ lives. It cannot be done at our expense.

We still believe that the right path is to conduct and continue talks and come to an agreement within the framework of the well-known principles, and that is only possible through maintaining the truce and building bridges of confidence. Nobody has done better by burning bridges behind him and will never do.

Once again I declare vociferously that we stand ready both for the good and for the worst. I got all possible options on my table.

We can, and we should negotiate peace with a sober-minded partner.
We should, and we certainly will enforce peace on an unsober adversary.
This much I wanted to say. Now let us address the agenda items.