Address by President Serzh Sargsyan at the Supper with Italian Parliamentarians 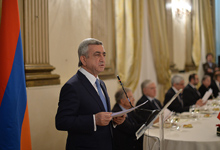 It is a great honor for me to enjoy your noble presence at this historical palace located in the heart of Rome. I am grateful for such a warm and sincere reception.

It is also an honor to revisit the friendly country of Italy with which our relations are derived from a shared set of Christian values and world outlook, as well as from the age-old friendship between the two peoples. It is by itself an impressive fact that in the parliament – a body through which the Italian people’s voice is heard - the Italy – Armenia friendship group is so large and has more than hundred members.

2015 is unique for Armenians: this year is the 100th anniversary of the Armenian Mets Eghern – the first genocide of the 20th century. It was the first, but, unfortunately, not the last genocide, which paved the way for crimes against humanity to be committed thereafter – the Holocaust, Rwanda, Cambodia, Sudan… In only a few days, on April 24, Armenians all over the world, joined by representatives of the international community, will say no to all genocides, and numerous church bells will ring from Argentina to Italy, from the US to Armenia. That day the bells of sister churches will ring very loudly or, at least, it will seem so to us.

Yes, we cannot change the past, but we can and are obliged to salvage a future free of such crimes. We have an obligation towards those who fell victim to those calamities and towards the people who suffered those agonies. We are responsible towards all those people who are put at risk even in our days, in the 21th century. In this regard, even about one century later, the words of Italian Prime Minister Luigi Luzzatti are still relevant and impressive today. Far back in 1918, speaking about the need to back Armenia’s independence, he argued: “Italy’s principle to support the rights of peoples is the following: we love our homeland, we adore our people, but we also suffer when we notice injustice towards other peoples.”

When what is impermissive becomes permissive, when what is inadmissible becomes admissible for the international community, there emerge new barbarians. The crimes being committed nowadays in the Middle East by the Islamic State and other terrorist groups are the consequence of that very permissiveness and impunity. As a representative of people who have been struggling against the repetition of genocides for hundred years, I assure you that crime is not a result of the separation between a Christian and a Muslim, a Jew and a German, an Armenian and a Turk, a Hutu and a Tutsi, but is a result of the divide which is present between the ones who embrace universal and fundamental values and the ones who deny them.

As a responsible member of the international community, Italy, too, has joined the fight against this calamity. By this I refer to Italy’s recognition of genocides, including the unanimous recognition of the Armenian Genocide by the Italian Chamber of Deputies. We highly value the fact that separate Italian cities and provinces, including Rome, Milan, Venice, Florence, joined by Tuscany this March, have also recognized and condemned this terrific crime. We are confident that the passing of a bill criminalizing genocide denial by the Italian legislature would help us to move one step forward in the fight against those crimes.

You know that Armenia was declared as friends and allies with the Roman people back Before Christ. Following the genocide, by granting asylum to our compatriots, Italy became a synonym of a dignified life for them. Throughout centuries, Armenian-Italian relations have further intensified and broadened, assuming a new quality and acquiring a new meaning after Armenia’s independence. Today we have a busy bilateral agenda – from active political dialogue to cooperation in the areas of education, culture, economy and defense. There take place regular senior-level visits and there is a broad legal framework. Today Italy is Armenia’s second trade partner among European countries. All of this, of course, bears testimony to the great significance of Armenian-Italian relations.

Inter-parliamentary cooperation is the key component of our relationship. I am glad to state that that there are friendship groups both in the Italian and Armenian legislatures. My honest desire is that you could promote active dialogue with your Armenian partners and could pay visits to Armenia, as well as to Nagorno-Karabakh, thereby enriching the Armenian-Italian cooperation agenda. By the way, the number of deputies has been gradually increasing, who visit Artsakh from parliaments of different European countries – Germany, Switzerland, France, Great Britain, Denmark – in order to get accurate information about the conflict on the spot. I think that this because our European colleagues want to receive objective and reality-based information about the Nagorno-Karabakh conflict, especially considering that the Nagorno-Karabakh Republic is a well-established reality, a state, whose development is firmly based on democratic values and human rights. This characterization is not only mine and is also confirmed by authoritative international organizations. Availing myself of this opportunity, I once again express my gratitude to Italy’s government for its impartial and balanced position on the Nagorno-Karabakh conflict, a vital issue for us.

Delivering my address in a city which is, indeed, the cradle of civilization and democracy, and in a country which is a pivotal player in the European Union, I also have to reflect upon Armenia-European Union (EU) ties. We are natural partners because our partnership is first of all rooted in shared values: Armenians and Armenian civilization are a part of European civilization, and our state is committed to promoting those values. In the upcoming days, ahead of the Eastern Partnership Summit in Riga, a new legal basis for Armenia-EU relations will be established after which they will enter a new stage. At the same time, being a member of the Eurasian Economic Union (EEU) which most closely meets EU standards, we could become a bridge for European countries, including Italy, leading to a 170-million EEU market.

It is impossible to cover our multifaceted bilateral ties within a few minutes. However, as a unique bridge of Armenian-Italian friendship, I would like to highlight the Mekhitarist Congregation established on the island of San Lazzaro in Venice since 18th century which has become an Armenology center and a holy place in the heart of Italy.

Although diplomatic relations between our countries are only 24 years old, the age-old friendship between the Armenian and Italian peoples has countless manifestations. Here is a beautiful example: 150 years ago, the great Armenian poet Mikael Nalbandian, inspired by Italy’s struggle for reunification and freedom which was led by Giuseppe Garibaldi, wrote “Song of the Italian Girl” which was received well among the Armenian people and now underlies one of the symbols of Armenian statehood – national anthem. This is surely a very symbolic fact.

and may it continue its triumphant advance as a symbol of our glorious past and our future achievements.