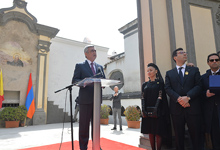 It is a great honor for me today to be here, in this wonderful city of Naples, linked by many threads to the Armenian people’s history, surrounded by your respectful presence.

I am very excited that the very first Armenian pontiff is the custodian of this city located more than 2000 km away from Armenia and that this wonderful 16th century monastery complex, as well as the street and square adjacent to it, have borne his name so far. This speaks of the deep and indissoluble ties that bound the Armenian and Italian peoples together to which Saint Gregory the Armenian also greatly contributed. And the fact that today, after about five-century absence, his holy relics have been returned to their original chapel, is of great significance.

On the whole, it is a vivid fact that Armenians have built churches not only in their homeland, but also in all the places where they have been destined to settle. In the 12th century, there were more than ten Armenian churches in 9 Italian cities whose number grew to 40 in the 15th century. It is very exciting that even in such a small Italian city as Matera there also rises a nice-looking Armenian church.

A few minutes ago, an Armenian cross-stone was installed in this square bearing the name of Saint Gregory the Illuminator which has been recognized by the UNESCO as a non-material heritage. The cross-stone came to fill up the ranks of memorials to the Armenian Genocide erected in Rome, Milan, Padua, Bari, and in different corners of the world, as a vivid testimony to the crime which took lives of one and a half million innocent people. Many of them remained unburied, and for this very reason the most crucial mission of such memorials is the unique way to keep their memory alive. But this cross-stone holds greater significance because its original copy has also been destroyed among Nakhijevan’s other cross-stones, falling victim to the cultural genocide committed by Azerbaijan. These crimes pursue one goal – to exterminate millennium-old cultures and erase peoples’ memory - human memory exists as long as it lives in people who keep and pass them on.

It is the shared set of Christian values stemming from humanism that bound together Armenia, Italy and the Holy See, the capital of the catholic world. This is clearly illustrated by the exceptional mass to be performed by Pope Francis for Armenian believers tomorrow and the bestowal of the title “Master of Cosmic Church” to God-Given Saint Gregory of Narek, the genius of Armenian thought, considering that throughout the 2000-year-old history of the Catholic Church, only 36 eminent saints and theologians have been honored with that highest title.

Armenia, as a true apologist of preservation of cultural values, makes consistent efforts at the noble cause of preserving and propagating Christian culture which is manifested, among other things, by the restoration of the 17th century fountain located in the yard of this monastery complex.

This year marking the Armenian Genocide Centennial holds exceptional significance for each Armenian. This is an important anniversary for both the Armenian people and the international community to not only cast a retrospective look and reevaluate the historical facts, but also to say “Never Again” to crimes of such kind. For this purpose, in a few days, on April 24, an unprecedented number of foreign dignitaries, including presidents of European countries, will stand beside the Armenian people in Yerevan, on the hill of Tsitsernakaberd, the memorial to the genocide victims. We highly appreciate that Italy and the Holy See, too, have joined the international fight against this calamity, by recognizing and condemning the Armenian Genocide.

Reverting to today’s events, I would like to thank you for your comprehensive support for their organization. Today Naples became closer to us though Armenians’ love for this marvelous city began back in the 9th century. It is characteristic that it is on very San Gregorio Armeno Street located in the heart of Naples that the most famous exhibitions of Christmas scenes and a Christmas fair are organized. The latter turns into a unique assembly place for Christians during Christmas days.

Taking all this into account, I think that we should make concerted efforts to incorporate new dimensions of cooperation into our cultural ties, e.g. tourism development programs, especially considering the fact that Italy is among primary destinations for Armenian tourists. In this regard, we should follow the advice of the great son of Naples Giordano Bruno, a world-famous scientist: “There is nothing that cannot be overcome through working.”