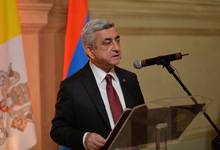 I am very glad that as part of this busy visit, I have the opportunity to meet with you and enjoy this sincere atmosphere. The Armenian community plays a major role in the development of bilateral friendly relations both in the case of Italy and many other countries.

We have testimonies of Armenian presence in Italy dating back to remote ages. It was especially after the adoption of Christianity (you know that the two states adopted Christianity almost simultaneously – Armenia 301 AD, the Roman Empire 312 AD) that the two peoples embraced the same set of values, and their trade and military relationship was also reinforced with civilizational, cultural and spiritual ties.

In the person of the representatives of the Armenian community present at this hall, I would like to thank our compatriots in Italy whose decades-long efforts and creative activities have made them an important part of the country and whose everyday dedication helps keep the prestige of Armenian people high, neutralize anti-Armenian activities and contribute to the further development of Armenian-Italian ties.

History turns over its pages, giving a new meaning to the Armenian-Italian historical relationship anchored in mutual trust and respect which assumed a new quality after the restoration of Armenia’s independence. Today we have a busy cooperating agenda and new programs. It is also no accident that I am visiting Italy and the Holy See on the eve of the key Armenian Genocide Centennial events which are to start in just a few days. The Holy See and Italy’s Chamber of Deputies, five Italian provinces and 60 city councils have recognized the Armenian Genocide which we regard not only as a manifestation of solidarity with the Armenian people, but also as loyalty to universal values. It is very important to us that tomorrow Pope Francis, the leader of the worldwide Catholic Church, will preside at Solemn Mass for the faithful of the Armenian Rite at Saint Peter’s Basilica. We are deeply grateful to His Holiness Pope Francis for the idea of this unprecedented mass which is taking place two weeks before the canonization of the Armenian Genocide victims by the Armenian Apostolic Church, thereby symbolizing the Christian world’s solidarity with our people.

For us, the international recognition of the Armenian Genocide means not only the condemnation of the villains who planned and carried out the first genocide of the 20th century – one of the most terrific crimes that has ever been committed against humanity. All our endeavors are not solely aimed at perpetuating the memory of our innocent victims, our grandmothers and grandfathers, restoring justice and the rights of their descendants. Our fight is first of all aimed at returning to the civilized world and humanity, the greatest civilizational values – love and happiness, belief and trust, hope and warmth – of which our world fell short of as a consequence of that terrific crime. Alessandro Manzoni, one of the greatest sons of the Italian people, very rightly put it that criminals are guilty of not only their crimes, but also of the entire evil which causes darkness to penetrate into their victims’ hearts. Our efforts are aimed at dispersing the darkness which has penetrated into the hearts of million people over the last century and lightening their souls with the belief in justice.

As a national collectivity, we, the homeland dwellers and diaspora Armenians, are very strong. This is regularly confirmed especially when we face an urgent necessity to make concerted and combined efforts to respond to challenges. In critical moments, we find will and consciousness to consolidate in order to bring together our resources for the sake of tackling pan-Armenian issues. The Italian-Armenian community is the striking illustration of what was said above, and I am grateful to you for your readiness. This is a strength with which both our friends and non-friends reckon with.

Our entire people in Armenia, the diaspora and Artsakh have combined their efforts with the Armenian state to commemorate the Centennial events at the highest level, and many of you, too, have contributed to that goal. I express my deepest gratitude to our compatriots from different countries of the world present at this hall and to all those who have supported us in holding the Centennial events. The support of such patriotic and devoted individuals has assisted, has encouraged and has inspired us in our undertakings to worthily commemorate this anniversary which is of great significance for the Armenian people.
I hope that you, too, will visit the Homeland during those April days to join us in commemorating the bright memory of our martyrs.

I wish all of us coherence and steadfastness to realize our common desires.