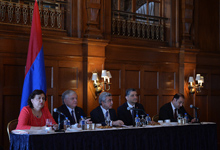 I am proud to share this warm environment with you. Every time I am delighted to meet our compatriots, those who have managed to unite and make our voice heard in one of the most influential states of the world and to create such a powerful and presentable community which is spoken of everywhere both by our friends and non-friends.

But I am even more proud that with your diligence, creativity, talent and genuine devotion towards this country you have also managed to bring your contribution to American multiculturalism and the development of the country.

History continues to write itself, and last April opened a new page in our history when we made concerted efforts to commemorate the Armenian Genocide Centennial, sending the appeal “Never Again” to the world.

On April 24, standing on Tsitsernakaberd Hill together with about 65 foreign delegations and heads of state, we affirmed that from now on, the recognition and condemnation of the Armenian Genocide is the inalienable part of the international human rights policy.

Throughout history, we have always felt supported by our friends, which has been manifested in various ways. The Armenian Genocide Centennial opened a new page in terms of the support provided by the international community. The Hellenic and the Cypriot parliaments criminalized the denial of the Armenian Genocide, the Austrian, Bolivian, Chilean and Luxembourgian parliaments recognized it, the European Parliament and the Russian State Duma adopted resolutions condemning it, and the unprecedented address by the German president calling to show bravery in confronting one’s own history, set a milestone for the present and future leaders whose goal is to make the world a juster and more secure place to live in. Various international institutions and organizations, e.g. political forces, adopted numerous resolutions and statements, which was simply unprecedented. By this I refer to the recognition and condemnation of the Genocide by Europe’s most influential political force, the European People’s Party and also to its appeal to its members and officials to push this issue forward in their domestic parliaments. Indeed, the mass performed by Pope Francis at St Peter’s Basilica on April 12 was an exceptional phenomenon whose powerful message of condemnation was able to make very many people sober. And I strongly believe that the event not only recognized the Armenian Genocide, but also honored the merit of the Armenian people and admitted the fact of their contribution to global civilization. Of course, it is also very important for us that this series will be filled up by the inter-religious prayer to be performed at Washington National Cathedral, as well as by other events to be held in the future.

Last April was marked by two more unprecedented events – an unprecedented case. Armenia hosted the global forum “Against the Crime of Genocide,” which was attended by more than 600 scholars, public figures, journalists, and representatives of parliaments, and, of course, of international organizations who had arrived in Armenia form different corners of the world. Later on, our martyrs were canonized in the Mother See of Holy Etchmiadzin, in the presence of the primates of sister churches, guests and diaspora Armenians. They are not martyrs any more, but saints who will always bolster us in our struggle. Along our path of centennial struggle, we have always felt supported by the U.S., and today, owing to your many years’ and consistent efforts, the U.S. has become one of the centers for the recognition and condemnation of the Armenian Genocide. 44 U.S. states have recognized the Armenian Genocide. There are numerous memorials to our innocent victims spread all over the U.S. territory.

Of course, we will continue our concerted activities aimed at the international recognition and condemnation of the Genocide, and I am confident that the day heralding the accomplishment of our goal is already visible.

The great humanitarian Anatole France was definitely right when he said that Armenia was breathing its last breath, but it would revive. The little blood that remained, as he used to say, was very precious, and would give birth to a heroic generation. Those people who do not want die will never die. And that heroic generation was born, one who built independence, one who liberated Nagorno-Karabakh and one who has presently settled down to work to promote national prosperity.

Of course, the Nagorno-Karabakh conflict continues to be among our primary concerns. Armenia’s position has always been to reach a peaceful settlement based on the principles of international law which corresponds to the position of the OSC Minsk Group Co-Chairs and to that of the co-chair countries.

I am very glad that five U.S. states have already backed Artsakh’s statehood building efforts, and this is totally the result of your activities. I am grateful to you for it.

Regardless of any circumstances, I am confident that thanks to our combined efforts, we will be able to make Artsakh a full-fledged subject of international law and international relations. It is already a well-established state, with its institutions, history of democratic elections, and it is an irreversible process.

Our next objective is to make Armenia an economically stable, developing and diversified country attractive to investors. Here we have made some progress thanks to promoting a business and investment climate, pursuing an open skies policy, creating free economic zones, as well as to stimulating a knowledge-based economy.

American business has been broadening its involvement in Armenia year after year, and now more than 400 companies with American capital operate in our country, and this year, probably one can count the days, American Contour Global LLC will enter the Armenian market with its 250-million-dollar investment capital, which is the largest American investment in the history of the Republic of Armenia.

And it is no accident that just now we concluded the Trade and Investment Framework Agreement between Armenia and the U.S., which emphasizes the success of Armenia’s economy and that of the economic cooperation between Armenia and the U.S., and opens up new collaboration doors. This means that the two countries encourage cooperation between their businessmen at a state level.

I urge all Armenians to continue getting actively involved in Armenia’s statehood building efforts. Initially, our task was to move from charity to a mutually beneficial partnership. Today our task is to broaden that partnership, especially when Armenia’s membership in the EEU opens up new horizons for such activity. We can benefit from the Generalized System of Preferences (GSP) in trade with the U.S., Canada, Switzerland, Japan and Norway, and we also benefit from the EU’s new Generalized System of Preferences (GSP+) which implies that new markets are open to Armenian businessmen.

A few days ago, on the night of April 23, at the heart of Yerevan, in its center, under the pouring rain, over the sea of thousand lifted hands, we could hear the impressive call of our eternity made by the world-famous band “System of a Down:” “Generations, Recognize Yourselves from

Yes, the very Armenians bleeding in Sardarapat, heralded, contrary to fate, that they are ready to remain Armenians until the last drop their blood. And it was exactly in Sardarapat that the joint feat of Armenian warriors, boors and clergymen crushed the backbone of the death-bringing troops. And today in Sardarapat, a part of Armavir marz of the Republic of Armenia, populated by the heirs of Armenians exiled from Van and Mush, Igdir and Amasia, there rises the eagle of the Armenian victory which destroyed the force lusting for Armenian blood.

We remember this together with Sardarapat. The world and time also remember this. And that same time bears testimony to the fact that our paths lead all of us from Deir ez-Zor to Armavir.

This is the precept of that same time to us and our successors, our friends and to those who consider us their enemies: The April of Armenian crucifixion is always followed by the May of Armenian victories.

And long live the Armenians who play into the hands of our unity.

And long love those who regardless of their social standing, resources and capabilities, always find ways and means to get involved in the development of the Republic of Armenia and in tackling the issues which are of great concern to Armenians. I am grateful to all those who have made their contribution to all these events emphasizing the honor and prestige of our people.

I am grateful that today you are here and I am confident today all of you are thinking about the power of our unity.

Now, I am pleased to listen to your opinions on how we can continue to use the opportunities provided by our unity in order to push our national interests forward, and I am ready to respond to any question.