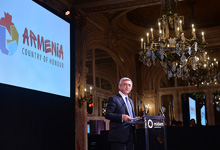 It is a great honor to greet and welcome you at the world-famed MIDEM music festival. It has been for half a century that Côte d’Azur annually unites people of global fame and youth that just entered their careers in culture, for whom it is an honor to perform in this amazing city and its prestigious stages that could be of vital importance for establishing them professionally.

Armenia is the country honored this year by the MIDEM international music festival. It is a great opportunity for our country to deliver its own culture to the world and to get acquainted with the others’ achievements. Armenia’s history and culture is among the most ancient, and our nation has been creating, building and establishing values for centuries.

Unfortunately, the early preceding century imprinted its darkest pages in the history of our ancient nation: the Ottoman Empire planned and perpetrated the Armenian Genocide. 1915 is a black wedge driven into our memory, thinking and lives. That was the calamity to which French writer Anatole France reacted at the beginning of the previous century: “We have finally realized that it was our sister dying in the East, who perished for being our sister and for the crime of sharing our feelings, for having liked what we liked, for having thought what we thought, for having believed in what we believed in, for appreciating wisdom, justice, poetry and arts as we did.”

Indeed, it was a ruthless extermination of the people that appreciated, cultivated and promoted arts and culture. There had been numerous vivid examples in the very area of music. In Constantinople Armenians had established the first orchestras, musical magazine, opera and operetta theatres. The Turkish press of the time had written: “Tigran Tchoukhadjian is the first composer that attempts to connect the Turkish music to the European one.” Unfortunately, the Armenian ideas and talents had not gone unnoticed, and those were the first targets for annihilation.

It took place at the beginning of the previous century. Today, however, as one hundred years passed since the carnage in the Ottoman Empire was perpetrated, in this utmost symbolic year, when the Armenian Genocide Centennial is being commemorated, we unambiguously register that no brutality could have been able to murder virtues of civilization and morale in the Armenian spirit, its longing to live and create, as well as its spiritual and cultural progress. Both ups and downs have given a potent impetus to our progress. This very outstanding power impelled Armenians to cut churches in the rock, to save books and manuscripts instead of precious gems and golden jewelry while barely surviving the Turkish yataghan, to throw themselves into the fight against fascism while the nation was still recovering from the Genocide, and to go on living and creating.

That outstanding power is first and foremost about passion of spirit that awakes when we got a shared dream, which we would like to make true. That is the same outstanding power that enables us to present ourselves to the world as a nation that embodies values, a nation that lives at the cross-section of cultures and connects freely and confidently, without any hesitation, to the two worlds of East and West.

These are all qualities undoubtedly build around our culture, which has become the ends and means to assert Armenian existence and identity. Wherever there is an Armenian, he/she does not shy away from keeping up with modernity, does not stagger in this greater world, but assert his/her continued presence and valuable contribution.

It was yet a century ago that the distinguished Armenian composer Komitas presented himself and our national vocal arts and tradition to France. And he was enthusiastically received in France; moreover, the great French composer Claude Debussy kneeled in front of him, and another great Frenchman, Romain Rolland, wrote after attending the performance by Komitas: “The Armenian is profound, tragic and virile even in his dreams… What a wonderful music! Sooner or later the European art will be exposed to the impact of that art.” Therefore, it is highly symbolic that tomorrow in this very exquisite city, under the auspices of this globally most important music event, in the music hall named after Debussy music works by Komitas will be performed.

There have been numerous instances of the Armenian cultural and spiritual perseverance. Many people that prove our perseverance are now present in this hall. The boats that reached and anchored in Marseille brought many Armenians, whose descendants today adorn the French culture – Charles Aznavour, Rosy Armen, Alain Terzian, Alexander Siranosian, Mr. and Mrs. Robert Guédiguian. These individuals are full-fledged and distinguished French citizens, but they, meanwhile, cultivate their Armenian heritage, history, faith and culture. The memories of their past and reminiscences of their origin imbue with peculiar allure the works they created, make those works Armenian and, simultaneously, global and universal.

Today the French soil consolidated us around music, which is the most lucid, most human, most perspicuous and most affecting perhaps of all arts. Today we present ourselves here through a comprehensive language that is speechless. This is exactly the case that renders words unnecessary. This is exactly the case that makes art to emanate from heart and reach other hearts.

That had been the instance from the medieval poet and composer Nerses the Gracious to Komitas, Alexander Spendiarian and Armen Tigranian, and then to Aram Khachaturian and Avet Terterian. And that will go on eternally. There are gifted people in the current Armenian music culture too. Some of them are here with us, present in this same hall – Hovhannes Chekidjian, Robert Amirkhanian, Aram Satian, Arthur Grigorian. Their talents are with us, and talents will proliferate since their art is infinite, it cherishes and nourishes us.

On coming days, when you will listen to the Armenian music presented in various genres, I believe, you will conceive that our art is inherently national and, simultaneously, boundless and universal. I strongly believe that the national tunes that generated and emanated from the Armenian soil will muffle the sadness, appeal to the ears and hearts, and fill the spirits of the listeners with harmony.