Address by President Serzh Sargsyan on the occasion of Independence Day 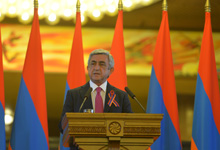 I congratulate all of us on the occasion of Independence Day.

Our people perfectly recollect every single sheet from the calendar of their struggle and combat. They remember those, who fell on our ages-old path and celebrate each day of our victorious unity.

Our historical calendar includes sheets inscribed in golden letters that have become our destiny for decades, centuries and millennia. They have also become the pages of the passport representing our national character to the world.

It was exactly such a new page inscribed in gold that our people created in their calendar of historical memory this day 24 years ago. On September 21, 1991, an entire people almost unanimously announced to the world that they assume anew the burden, responsibility and honor of mastering their own destiny.

And every time, when sharply a hundred and one days remain until the end of the regular year, we reiterate our pledge and declare to the world vociferously that we are here, we stand firm and determined. We are the masters of our own destiny, and our ancestors’ legacy belongs to us. We are the guarantors of cloudless mornings for our children and the pledge of peaceful sunsets for our parents. It is we, and nobody else.

The tongue we speak is Armenian, in which we prayed at the dawn of civilization and which can be heard today from the highest rostrums of the world. It can be heard thanks to the absolute unity demonstrated by our people 24 years ago.

That unity has not only granted us independence, but has also given us the power to fight and the spirit to create throughout two and a half decades. The Army and the State, market economy and civil society have been the institutes we established as our unambiguous response to the chance given to us by time and challenges imposed upon us.

However, the sweetest fruit of our unity is, without doubt, our present-day prideful and beautiful generation of independence.

This calendar day holds significance not only for us, but also for the entire humankind. By coincidence or destiny, on this very day, when our people triumphantly celebrate the holiday of their will to live independently and peacefully, the Peace Bell rings at the United Nations Headquarters. It rings sonorously and loudly to commemorate all those, who were slaughtered and continue to be slaughtered in war crimes. It rings to remind us of the fundamental human right to live peacefully and free from violence. It rings to demand ceasefire and peace for children and for the elderly, for women and men.

Unfortunately, even on this international day of peace the Peace Bell sounds are often muffled by machine-gun fire and shell bursts, by artillery volleys and rocket rumbles.

Likewise, on our borders, in our villages, our mountains and our valleys the 21st day of September sometimes, alas, breaks not under the sounds of the Peace Bell, but under the battle alerts.

People in the Middle East, who gave shelter to genocide survivors, grandfathers and grandmothers of ours, are writhing in agony in the clutches of war that is by international standards just a few steps away from our door. Our sonorous “Aye” on September 21 two and a half decades ago has provided today warm shelter for our consanguine brothers and sisters, who escaped from the engrossing conflicts in the Middle East.

The key importance of September 21 is, perhaps, the price of our decisions for our generations and our responsibility towards the future, the mark that our actions or inaction leave on the fate of our kind in the depth of time. That mark can be a crown, or a stigma.

Armenians should follow exactly this very message of September 21 since Armenia is now at the important stage of making its choice for the constitutional reform. Whatever decision you make, my fellow compatriot, remember that it is not only about your, but also your children’s future, remember that it is not as much yours, but next generations’ safety and welfare that is being decided.

May the rays of September 21 disperse the dark in our future and brighten the decisions of our compatriots both for those that have already made their minds up and those, who are still stuck in doubts at this cross-section.

September 21 denotes also revival of our people that survived the first genocide of the 20th century – one of the gravest crimes against humanity.

Yes, this calendar sheet is also filled with lines fraught with our people’s blood. We remember those lines very well. And we will continue to remember it as long as the blood of our ancestors martyred by the Ottoman Empire’s sword in Van, Mush, Trabzon, Yerznka, Marash, Sebastia, Erzurum and Kharberd has not frozen in our veins. We have also their precept to do everything so that never again shall our kind face the danger of annihilation and massacre. We have the belief that in the world full of contradictions and dangers, that in our frantic and running days, the only true guarantee of the Armenian kind is the Armenian sovereign and independent state. We have the conviction that people are the only source of power. We have the confidence that popular unity at the decisive turns and around vital issues is the only force able to respond to the external and internal challenges.

September 21 is the symbol of our faith, our convictions and our confidence.

Congratulations on the Independence Day!