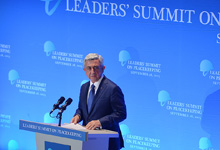 I thank President Obama for the initiative of this summit, which is of pivotal importance from the international security perspective.

Despite the immense efforts directed by the international community toward prevention of conflicts and their peaceful resolution, peace and security remain fragile and vulnerable.

I am glad to note that despite the present tensions on our borders, Armenia’s engagement in the area of international peacekeeping has gradually expanded both geography-, and quantity-, and quality-wise. Currently Armenia is already an active contributor to the international peace and security, and in the course of the preceding decade it accumulated considerable experience.

Since 2004 Armenian peacekeepers joined the operation in Kosovo, and later the same year – the one in Iraq. Since 2010 we have taken part in the International Security Assistance Force in Afghanistan. Since 2015 we have partaken in the Resolute Support Mission in that very country, and, as we have declared on numerous other occasions, we will stand there with our international partners until that mission is accomplished.

Last year we expanded our engagement with peacekeeping missions. Now we are also present in the UNIFIL mission that is stationed in Lebanon. Moreover, this July Armenia launched its participation in the MINUSMA peacekeeping mission in Mali. And, most recently, we have undertaken new commitments to develop appropriate skills to be provided in the course of our future participation in the UN peacekeeping operations such as a Role II medical hospital and training of associated personnel, as well as training of a company of EOD/C-IED (Explosive Ordnance Disposal & Counter-Improvised Explosive Device) soldiers.

The U.S., Greece, Germany, as well as NATO structures and other member States have played pivotal role in the establishment and development of the Armenian peacekeeping capabilities, and I extend our special gratitude to them upon it.

Preservation of international peace and security is a primary responsibility for all, both great and smaller States, and peacekeeping is a major conduit to achieve that objective. Today we still need to take additional collective measures for its further consolidation. It is obvious that a peaceful and safe world may be secured solely by comprehensive, joint and careful measures to be taken.