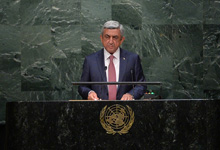 I congratulate you upon election to the honorable post of the President of the United Nations General Assembly. I am confident that under your able leadership this jubilee Session will meet expectations we all harbor.

I also congratulate all of us upon the 70th anniversary of the United Nations. The establishment of this Organization had been one of the greatest achievements of the humankind that consolidated nations around shared aspirations and principles. The past 70 years have been characterized by the most important positive developments – an end was put to colonialism, racial discrimination and apartheid. Many people around the world exercised their right to self-determination, got in charge of their own fate by establishing and building independent states of their own, thus increasing the number of the UN member States from 51 to 193.

Amid all these achievements, we shall recognize that currently the world faces new challenges such as terrorism, extremism, intolerance, economic crises, climate change, trafficking in human beings and their organs, as well as drugs and arms, migration crisis etc. The list enumerating these challenges is long. It is the very necessity to struggle against them that obliges us to resolutely reiterate our joint commitment to the mission of this Organization and its Charter.

Last year, on the eve of the Armenian Genocide Centennial, from this podium I expressed our gratitude to the nations that recognized the Armenian Genocide and named them all individually. I called upon the international community to bolster the struggle against the recurrence of the crime of genocide through recognition and condemnation.

Today, from this very podium, I thank Pope Francis, and acknowledge the historical Mass he celebrated; the European Parliament, and recall the Resolution it adopted; the German President, and, believe me, his well-known statement will thenceforth take part in the pages of our nation’s history textbooks. I thank the legislative bodies of Austria, Bolivia, Brazil, Chile, Luxembourg, and the Netherlands, numerous provincial and city councils, as well as dozens and hundreds political and non-governmental organizations.

I thank the Presidents of Russia, France, Cyprus, and Serbia, as well as delegations of numerous other countries that on April 24 paid tribute to the victims of the Armenian Genocide in Yerevan.

Our determination to keep the prevention of the crime of genocide on the international agenda is testified by the Resolutions we periodically table at the Human Rights Council, and the latest one to that effect was adopted this year. Building further upon it, just a few days ago this Assembly passed a resolution establishing December 9 as “the International Day of Commemoration and Dignity of the Victims of the Crime of Genocide and of the Prevention of this Crime.”

The peaceful resolution of the Nagorno Karabakh problem remains one of the most salient issues in our region. I shall note that aggressive policy pursued by Azerbaijan resulted in the absence of any meaningful progress of negotiations for the conflict settlement, and the situation drifts toward increasing tension. The dictatorial regime of the country made disgraceful repression an instrument to strangle the people’s wrath as the oil-based economy obviously falters, and even that, nevertheless, it considers being inefficient. Now it needs images from the Line-of-Contact in order to divert the attention of its own public. I would like to draw the attention of this Assembly to the fact that Azerbaijan, besides various provocative actions, has now started to apply largecaliber artillery firing at the peaceful settlements of the bordering districts of both the Republic of Armenia and Nagorno Karabakh Republic.

Just a few days ago in the bordering area of Armenia three women fell victim to Azerbaijani bombardment. The question that comes up to one’s mind is whether there is any reasonable person that can demonstrate any unflawed logic of that cruelty. It is obvious for us that the Azerbaijani leadership has irreversibly lost both the sense of reality and of norms of human conduct.

Azerbaijan completely disdains 5 joint Statement issued by the Presidents of the U.S., Russia and France, and the efforts of the OSCE Minsk Group. Shall it continue its such an aggressive policy, it will not leave Armenia any other choice but to take necessary legal and political-military steps to provide the Republic of Armenia and Nagorno Karabakh Republic with the opportunity to develop in security and peace.

Although it is obvious to everybody as to which party instigates the cease-fire violations, I still would recall some facts.

It is strange – isn’t it? – that now it has already been for years that Azerbaijan stubbornly refused to withdraw snipers and establish incident investigation mechanism, which were proposed by the OSCE Minsk Group Co-Chairs. The question that comes up to one’s mind is what Azerbaijan is afraid of?

It is strange – isn’t it? – that during the European Games hosted by Azerbaijan, when they needed image of stability, there had been almost no shooting fired at the border, while immediately subsequent those Games shootings extensively renewed. I do not expect you to buy assertions of any of the parties, but still anticipate you to exercise your mother wit.

It is strange – isn’t it? – that in the 21st century our neighbor day in, and day out, relentlessly and indefatigably takes pride in excessive accumulation of arms and manifold expansion of the military budget; it stubbornly continues making bellicose threats to renew the military hostilities, and does it at the highest level of the head of state.

I think now it is obvious to everyone why Armenia had consistently been urging the international community to make statements that were not generic, but were unambiguous as to whom it was addressed to while discussing the ceasefire violations. We shall understand that muffling of the early warning signals of threats to the peace and security may materialize in catastrophic repercussions.

Today we witness unspeakable cruelty taking place in the Middle East. The religious intolerance resulted in the irreversible aftermath. We have been most directly affected by the atrocities unfolding there, since they result in the destruction of the Armenian spiritual and cultural heritage artefacts, murder and expulsion of the numerous Armenians residing in Iraq and Syria. The Armenian community of Syria, whose history is centuries-long, shares and experiences all hardships that the Syrian people are undergoing in these difficult times. We are trying to aid the refuges to the best of our abilities: until this day, Armenia received more than 16 thousand refugees from Syria. By this sheer figure, Armenia is one of the first among recipient European countries.

Armenians know well the fate of the refuges, of the exiled and expelled. The Armenian Genocide should have claimed many more lives, and the survivors should have gone through much more hardship unless a number of nations, our friends had given us their shoulder in those difficult times. Today it is Germany, Sweden, and some other countries that deserve their due praise for humanism they displayed. They provided hundreds of thousands of refugees with safe haven, and thus reiterated that the assistance was necessary both from the legal and humanist perspectives.

This year we all witnessed how the joint and adequate actions paved the way to smoothing out a difficult international issue. An historical agreement was made on the nuclear program of the Islamic Republic of Iran, an immediate neighbor of ours. That critical deal is undoubtedly going to contribute to the global settlement of the conflict situations and consolidation of the mutual trust, and it was made possible by the extended and consistent political and diplomatic efforts.

All these come to prove that when there is a political will to bridge disagreements and emphasize the spirit of cooperation, it is indeed possible to find solutions for the most complicated issues. From this podium I would like to once again stress the importance of taking diplomatic efforts, especially with the aim to eliminate the closed borders. Armenia has been subjected to the illegal blockade by its neighbors, and we deem unacceptable such an improvident policy that in the 21st century establishes artificial obstacles disrupting intercultural, human to human and trade contacts. In this context, we highly value the periodic review carried out under the framework of the UN Conferences on Landlocked Developing Countries. We stand ready to invest further efforts in this endeavor, also by hosting intermediate workshops on this topic in our country.

To conclude I would like to join all speakers who have called to take joint efforts to struggle against the darkness, vandalism and hatred. There can be no great and small countries for that cause, and every single one has a role to play. Armenia stands ready to make its contribution to that joint struggle of ours.