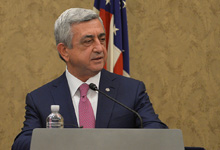 It is a great honor for me to be here today. This gathering is paying tribute not only to the victims, survivors, and their descendants, but also to the entire Armenian people. This is equally an expression of respect for all nations that have ever gone through the ordeal which is genocide.

This provides yet another opportunity to state that tolerance, alongside pluralism and equality in rights, is the source of ultimate values, though it may also be nefarious when the object of tolerance is vice, when the deplorable is tolerated. Elie Wiesel, a Holocaust survivor and Nobel prize winner, said: “Neutrality helps the oppressor, never the victim. Silence encourages the tormentor, never the tormented. Sometimes we must interfere. When human lives are endangered, when human dignity is in jeopardy, national borders and sensitivities become irrelevant. Wherever men and women are persecuted because of their race, religion, or political views, that place must - at that moment - become the center of the universe.”

In this respect the initiative to posthumously award the International Raoul Wallenberg Medal to Henry Morgenthau, Sr., is momentous and possesses a particular significance. I am delighted that his grandson, Mr. Robert Morgenthau, is here with us today.

Your grandfather was the first American to tell the world of the mass atrocities by the Young Turks against the Armenian people, qualifying them as a “campaign of race extermination”. Holding the office of the U.S. ambassador to the Ottoman Empire and having witnessed the nightmare first hand, he was to subsequently write in his Ambassador Morgenthau’s Story:“I am confident that the whole history of the human race contains no such horrible episode as this. The great massacres and persecutions of the past seem almost insignificant when compared with the sufferings of the Armenian race in 1915. … For all I know this represents a new crime pursuing wholesale extermination.” Subsequently this new crime that Morgenthau detailed was to be qualified as Genocide by Raphael Lemkin.

They say that as long as memory stays alive, so does the truth. Quite a number of facts associated with the Armenian Genocide have passed to us through Henry Morgenthau’s memoir. To this day his account is one of the most important original sources documenting the premeditated nature of the savage and inhuman crimes by the Young Turks. It is appropriate to recall how one of the organizers of the Armenian Genocide, interior minister of the Ottoman Empire Talaat had reproved Ambassador Morgenthau: “Why are you so interested in the Armenians anyway? You are a Jew; these people are Christians… Why can’t you let us do with these Christians as we please?”

It was the same Morgenthau who conceptualized and advocated for the American Committee for Relief in the Near East. Hundreds of its workers in various countries, including Armenia, undertook to provide care for orphans, saving tens of thousands of parentless Armenian children from imminent death. Upon completion of diplomatic service, he continued humanitarian endeavors, providing assistance to Armenian, Assyrian and Greek exiles who had survived the mass slaughter and had been purged from their homeland. This remains one of the highlights of American humanism.

Several months ago I visited the United States Holocaust Memorial Museum. It is a most compelling and articulate testimonial to the crime of genocide. Museums on crimes perpetrated against humanity convey a clear message to current and future generations: never to forget the grim chapters of history. Still, we should not rely solely on museums and memorials. Remaining faithful to the dictum “We Remember,” we must do everything possible, and the impossible, to secure a safe future for those who come after us. Hence, propagating the mission of Henry Morgenthau and his successors acquires great importance for us not only with a view of preserving memory for the future generations of Armenians and Americans, but also in the context of humanitarian education on a global scale. We should converge our efforts to keep alive the memory of the victims of the crime of genocide, to build a world free of violence. The prevention of the crime of genocide and fighting its denial is an important pivot in this pursuit.

I reiterate my words of gratitude addressed to the Raoul Wallenberg Foundation for their efforts to safeguard universal memory. Eternalizing the memory of the Mets Yeghern, Shoah and other crimes of genocide, persistently presenting these horrendous episodes of human history, and sending through them important messages to the generations to come shall have a conclusive significance in keeping the world free of that crime.

I address words of gratitude to the U.S. Congress and to all Congressmen and Congresswomen present, who have spared no efforts over years towards the recognition of the Armenian Genocide. Your role in the recognition and condemnation of our national tragedy is undeniable. I am certain that the work you have done shall culminate in its logical conclusion.

While being here, at the Capitol Hill, I would like to extend our words of gratitude to the people of the United States, and the U.S. Congress for the humanitarian assistance allocated to Nagorno Karabakh over the years. That assistance has been significant for the people of Artsakh both from the humanitarian and, first and foremost, moral perspective. It comes to testify, time and again, that the Nagorno Karabakh Republic has not been forgotten in its efforts to build independent and democratic state while countering the persistent provocations of Azerbaijan, which has chosen the path to perfect the tyranny. It is unambiguous that the Nagorno Karabakh people’s path toward freedom, toward determination to master its fate on its own, and toward building a democratic society is irrevocable. In this context, your continued support is indeed crucial.

Allow me to conclude in an optimistic key: if there is agony and genocide in this world, there also exist Wallenberg and Morgenthau, who have long become common name for us. Common name, since they stand for all humanitarians of this world, whether Christian or Muslim, female or male, kin or alien, jeopardizing their existence, saving Armenians and Assyrians, Greeks and Jews, Darfurians and others from the claws of death. Henry Morgenthau and Raoul Wallenberg, and those who carry their torch today can bring about change, help life triumph over death.