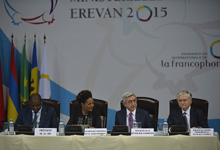 I am greatly honored to herald the beginning of this representative meeting, the 31st Ministerial Conference of the International Organization of La Francophonie. This is an exceptional event for our country, and Armenia is hosting the members of the great Francophone family with the same exceptional sincerity and devotion. This conference is a wonderful chance for all of us to once again honor the Francophone culture and sum up the solemn Francophone atmosphere prevailing in Armenia during the whole year. I cordially welcome all of you to Yerevan.

Let me also congratulate Michaëlle Jean, the newly-elected secretary-general of the International Organization of La Francophonie, who is participating in the works of the organization’s ministerial conference for the first time since taking office. Throughout this brief period of tenure, Mrs. Jean has tried her best to present the organization and its constituent institutions in the international arena. I am confident that under her able leadership, the organization will continue the best traditions of more than decade-long activities carried out by previous Secretary-General Abdou Diouf, the former president of Senegal, and will achieve further success in the organization’s works. Congratulations, Mrs. Michaelle!

Armenia has ages-old ties with many of the Francophone family countries. About one millennium ago, French was the language of official business correspondence and arts in the Armenian Kingdom of Cilicia which was situated along the coasts of the Mediterranean Sea. Today Armenia consistently fulfills the commitment undertaken under its membership in the Francophonie to popularizing and advancing the French language.

Currently, being a part of an organization representing 80 states and governments from five continents, including also separate entities, affords us new opportunities to reinforce our historical ties and establish and deepen new ones.

Presently, we live under conditions of new crises and threats that have emerged in the international arena, and can witness further widening of dividing lines. Hence, special importance have begun to acquire international and regional organizations which try to unite and not to divide. We must reinforce our institutions, raise their effectiveness and importance. In this respect, the International Organization of La Francophonie holds vital significance: our unity is grounded first of all on values - isn’t it? - which is a precious and eternal unifying factor in the present world.

Unfortunately, there are also conflicts and crises that continue to pose a threat to the security of some regions of the Francophone space and endanger their sustainable development. It was no accident that the main subject of the conference proposed by Armenia is “The Peace, Tolerance, Dialogue and Mutual Understanding in the Francophone Space.” We believe that through tolerance we can avoid a lot of problems and on the contrary, intolerance can result in crises, conflicts and even in the commitment of genocide, the gravest crime against humanity. We know about it from our own experience.

Availing myself of this opportunity, I would like to stress the Francophone family’s solidarity and support for the Armenia people in the context of the commemoration of the Armenian Genocide Centennial, which was expressed in the statement made by the organization’s secretary-general. We strongly believe that such crimes are possible to prevent only through concerted efforts and taking lessons from the past, preserve and respect universal values, including those of the Francophonie. Our goal is to build a society grounded on the principles of tolerance, peaceful existence and democracy.

There are other fields where we can work together - protection of human rights, migration, environmental protection, issues pertaining to economic development and youth: those all have long been classified as priorities by the Francophonie.

I would like to lay special emphasis on the problem of climate change monitoring. It is the overall responsibility of each and every one of us to secure a healthy and safe future for our generations. In this respect, I am confident that the Francophone community will made its contribution to the success of the 2015 United Nations Climate Change Conference to be held in Paris at the end of this year.

By hosting this conference in Yerevan three years after Armenia’s full-fledged membership, we want to reaffirm our country’s devotion to the International Organization of La Francophonie, a space of cooperation and dialogue, under the auspices of which flourishes the Francophonie’s treasure - its diversity. For us, the Francophonie is a culture, mentality and a set of moral values.

I wish the conference productive work, and I also wish you an active and pleasant cognitive stay in Armenia.