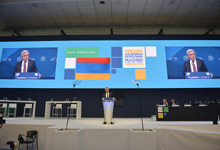 At the outset I would like to thank the EPP President Daul for the invitation to take part in this meeting. Thank You Mr. Prsident.

The Eastern Partnership Summit of Riga welcomed the common understanding reached on the scope for a future agreement between the EU and Armenia. Today I am glad to note that we have reached a new responsible milestone in our relations with the EU: last week the EU Council in Luxembourg adopted mandate to open negotiations on a new, legally binding and overarching agreement with Armenia. I strongly believe that negotiations will result in an elaborate document outlining comprehensive cooperation in all areas of mutual interest, and it will become the best assurance for our joint commitment to elevate Armenia-EU relations to a new stage.

There is no doubt that our journey should not have been unclouded unless it was supported by our partners, not least of the EPP family. I strongly hope that the EPP will stand by us also in the course of negotiations in order to conclude it as soon as possible and continue with the European agenda of Armenia upon a new legally binding foundation.

In our country we continue development of the democratic institutions, balance separate branches of power, protect human rights and independence of judiciary. We have taken an important step in this direction by initiating constitutional reform in our country, which is implemented in close cooperation with the Venice Commission. Should our people approve the Constitutional amendments on December 6, Armenia will transform its semi-presidential model of governance into the parliamentary one, which in its turn will make more efficient interaction of the separate branches of power, lay ground for more intensive economic development, increase the level of the human rights protection and institutional role of the opposition. We have invited the EU, PACE, OSCE and other international structures to observe the referendum. I am confident that you participation and best practices will give a further impetus to the progress of the democratic process in Armenia.

Last but not least I wish this unique platform of dialogue continuous and fruitful work.