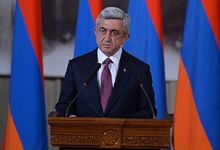 Today, the international community for the first time officially observes the International Day of Commemoration and Dignity of the Victims of the Crime of Genocide and of the Prevention of this Crime. It was the recurrence of the gravest crime against humanity that resulted in the creation of the term genocide, and subsequently the adoption in 1948 of the Convention on the Prevention and Punishment of the Crime of Genocide. The Convention opened a new legal page in the definition of genocides and global fight for the prevention of genocides.

These days, when progressive people of the world commemorate important anniversaries of the most vicious crimes committed in the 20th century, including the centennial of the Armenian Genocide, 70th anniversary of liberation of Auschwitz, 40th anniversary of the genocide in Cambodia, as well as anniversaries of genocides in Rwanda and other places, of Pontic Greeks and Assyrians, the history of the humankind is being distorted right before our eyes, right before our eyes there take place ethnic cleansings, mass murders, millennia-old cultural monuments of the human civilization are being destroyed, the memory of the nations is being erased.

Therefore, the international community has once again come together: to pledge on December 9 of every year that the best way to pay tribute to the memory of the innocent victims of this most horrendous crime is the consolidated fight against genocides.

This consolidation resulted in the endorsement by the majority of the UN Member States of the proposal made by the Republic of Armenia – motherland of the nation which survived a genocide – and through the corresponding resolution of its General Assembly declared December 9 the International Day of Commemoration and Dignity of the Victims of the Crime of Genocide and of the Prevention of this Crime. The initiative was a momentous achievement for our commitment to the international fight against the crime of genocide which has acquired a special connotation in the year when we commemorate the 100th anniversary of the Armenian Genocide.

From now on December 9 is not only the day of the adoption of the Convention of the Prevention of Genocides but each year on this day we will unite under the auspices of the United Nations to reconsider the message of the day – Never Again.