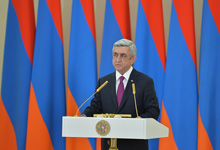 Dear Compatriots,
I cordially congratulate you on the occasion of Army Day.

This year, we will be celebrating the 25th anniversary of independence of the Republic of Armenia. It’s been a quarter of a century that we have a free and independent statehood. Throughout this time, we never doubted that our twenty-five year long journey would be possible without the Army which we created.

The Armed Forces of Armenia became the cornerstone which was laid in the foundation of our statehood. It was the dictate of the time and the region we live in. We knew all too well who we are and where we live. We are Armenians, and as one of the ancient nations of the Middle East and Western Asia, we had the millennia long experience.

Tragic events which are taking place today in the Middle East and in the areas which generally are very close to us, are painfully familiar to us and have been repeated regularly. We were the witnesses, contemporaries and chroniclers of similar events. They occurred right before our eyes in last centuries and during two millennia. Twenty-five years ago, when we assumed the responsibility for our own destiny, we were well aware that it was tantamount to entering a battlefield.

We shuddered in 1988, and the spontaneously formed self-defense units were our first steps in the struggle for survival. We also knew that the Fidayi movement would be doomed to failure, unless it became a regular army. The Armenian regular Army, our victorious Army, withstood the test of war because in those days Artsakh and Armenia, the entire Armenian nation became what a historian called the Askanazian nation, while the Holy Book calls it the Askanizian regiment, which represents the country, the nation and the armed forces.

Dear Soldiers and Officers of the Armenian Army, distinguished Veterans,

This glorious holiday is certainly a state and national holiday, but first of all it is your holiday. We trust in your dedication, in your professional skills, in your high combat spirit. We wish that from now no soldier is killed on the border. To you and our entire nation, I wish peace for our country’s freedom, for diligent work, which is a prerequisite for any progress.

I congratulate you on the occasion of Army Day and on receiving Motherland’s high awards and distinctions.

It is thanks to you and your comrades-in-arms that the Armed Forces of Armenia are carrying out their mission, and fulfill the tasks set before them. You are doing it with honor and you are doing on a high professional level.

You are the worthy followers of those who in the fires of the heroic Artsakh war laid the foundation of our future Army. Many of them died, giving us life and freedom. Today, on this sacred day, we bow to their blessed memory. You are their worthy followers who are true to the behest of the martyrs and to the values they entrusted.