Remarks by President Serzh Sargsyan at the University of Cyprus 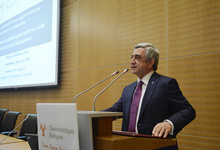 I thank you for hosting me at this beautiful building of the University of Cyprus. Contacts with young people are always enjoyable and useful for me. I am not only receiving positive impulses from you, but also new ideas and thoughts. However I attach special attention to the meetings with the young people of the friendly state because tomorrow you will carry on with the Armenian-Cypriot friendship which has millennia long traditions.

Cyprus is a dear country for any Armenian, while the Cypriot people hold a special place in the heart of every Armenian. Our nations have historical and cultural ties, common values and I am more than confident – the common future. We are the nations of our region which have earned the affection and respect of the world not through belligerent stance but through our diligence and love for peace. The best outgrowth of the historical friendship of our nations is the complete understanding and mutual support. It is no accident that our relations in political, military, cultural, and educational areas grow by year. Coordination on different issues of the international agenda and close cooperation in the framework of Armenia-EU relations considerably amplify our bilateral agenda.

For almost a quarter of a century, we have been building our independent state. Probably it’s just a moment for history, however for a country which creates its history these have been long and difficult twenty-five years, full of challenges – a devastating earthquake, war in Artsakh, economic blockade imposed by Turkey and Azerbaijan, state institutions, which had to be build from scratch, adaptation of the economy to the market relations. And all these had to be done simultaneously. There was a concern that we might fail. But one thing was crystal clear: Our goal and resolve to make our independence viable was unshakable.

Today Armenia is an established state; in recent years it has changed beyond recognition with regard to the increased participation of the civil society, freedom of speech, transparency of state structures, including the Army, more tolerant environment, and other issues.

In December, 2015 we made serious amendments to the Constitution, and Armenia switched to the parliamentary system of governance. I am confident that it will considerably strengthen democracy in our country.

Now, we are striving to solidify these achievements also with serious economic success. The 21st century is a period of economic diplomacy, and we are determined to implement reforms in Armenia aimed at raising Armenia’s economic attractiveness. I would like to note that we are doing it also with the assistance of our EU partners, because Armenia is motivated to achieve the bar set by the leading Western economies. We are glad that as a result of Armenia’s accession to EEU, as well as because of some recent international and regional developments, such the reopening of the 77 million strong market of Iran, there has appeared a new, vast field for our economic diplomacy. Today, Armenia is a tax free gateway to the 170 million strong EEU market. Preferential regime is extended also to the countries of EU, US, Canada, Switzerland, Japan, and Norway. In 2015, Armenia and the United Stated signed the Trade and Investment Framework Agreement (TIFA). We view it as a token of trust toward our country.

Today the humanity faces global challenges and the only way to thwart them – international terrorism, cybersecurity, climate change, migration or epidemics - is to join our efforts. In the globalized world, instability in any region can have consequences of global proportions. Thus, every one of us has individual responsibility for security in our own region. The foreign policy of Armenia in anchored in the understanding of that responsibility. A small country, we have developed our special model of interacting with the world.

I would be remiss if I failed to mention our traditionally friendly relations with the countries of the Middle East. Development of the relations with them has never been hindered by religious, national or any other factor. This is testified by the lasting existence of flourishing Armenian communities in the brotherly Arab states to the development of which the Armenia communities bring their fair share. Unfortunately, at this moment it is hard to speak about peace in that region in present tense. For us, Armenians the situation there is especially painful, since generations of the Armenian refugees, who had survived the Genocide and settled in Syria and East one hundred years later are once again forced to leave their homes and fruits of the years-long work and in the 21st century to flee once again to save their lives.

By the same token, as a founding member of the Collective Security Treaty Organization, and this year also as the presiding country, we continue to implement efficient programs with NATO. Through the peacekeeping missions, we bring our input to the enforcement of international peace and security.

After her accession to the Eurasian Economic Union, Armenia continues to steadfastly expand the agenda of her long-term cooperation with the European Union. That partnership is the most important guarantee of a deepened reformation in Armenia, strengthening of democratic institutions, and enhancement of economic cooperation. On December 7, 2015 negotiations on a new Armenia-EU framework agreement kicked off in Brussels, and we anticipate to conclude them pretty soon. It is very important that this approach, which probably at the beginning gave room for some misinterpretation, has become understandable for our partners. Moreover, it has received their approval. As a result, Armenia is viewed as a stable country and predictable partner, which does not create problems for itself or other states.

I believe you are aware that one of the most important issues on the foreign policy agenda of the Republic of Armenia is the problem of Nagorno Karabakh. We trust that in the 21st century, negotiations, as the only means to solve problems, have no alternative. With this regard, we value the principled support of the Cypriot authorities to the efforts of the OSCE Minsk Group. Although we strongly support the right of people for self-determination, which recently has acquired a new momentum and is being peacefully implemented by the peoples in different corners of the world, the Armenian authorities and the Armenian state will always support the position of Republic of Cyprus regarding the Cyprus problem. This not only a manifestation of solidarity with the brotherly Cyprus: It is our deep conviction that each conflict must receive its own, specific resolution because each of them has different roots and different logic. We believe that a peaceful resolution of the Cyprus problem is very realistic if the directly involved other parties do not obstruct steps aimed at the constructive solution of the problem. We desire lasting peace and just solutions for the Cyprus and Karabakh problems which face our nations.

Year 2015 was extremely symbolic for the Armenian nation. Armenia, the entire nation and the progressive part of the humankind commemorated the 100th anniversary of the Armenian Genocide. However, the aim of these events was not just a restitution of justice for our people; before the anniversary we were determined to give a new impetus to the fight against a new crime of genocide and reinforce the basis of its prevention. Today we can state confidently that we succeeded in that mission. We are grateful that on this issue too Cyprus manifested itself as a true friend. It doesn’t matter how many years will pass – the Armenian people will never forget that back in 1965, when Armenia was not an independent state, when our voice was not perceptible, it was Cyprus that spoke about the Armenian Genocide from the high podium of the General Assembly of the United Nations; in 1975 Cyprus was the first in Europe and second in the world to recognize and condemn that crime, together with Armenia Cyprus co-sponsored the UN resolution to declare December 9 the international day of remembrance of the victims of the genocide and prevention of that crime and in 2015 the House of Representative of Cyprus unanimously voted for the criminalization of the denial of the Armenian Genocide. Unanimously, because diverse opinions on this matter would mean departure from truth, while the freedom of speech – restricted because the issue deals with the utmost value – the right for life.

At the Armenian Genocide commemoration day, on April 24 the highest leadership of Cyprus in the persons of President Anastasiades and President of the Parliament Mr. Omouri were in Yerevan, standing next to us as true friends.

Nowadays, especially in this audience, I believe it would remiss of me to speak about the importance of education and knowledge, which is the driving force of the contemporary, rapidly changing world. It is more than true in Armenia’s case, because the vision of the country’s development is anchored in the human capital, in the Armenian youth who receive a high-quality and modern education. This is exactly what we cite against some of our neighbors bragging about their reserves of natural fuel.

Today we, Armenians present ourselves to the world with our seminaries, medieval universities, depositories of ancient manuscripts, but also with the modern educational centers, schools which are in line with international standards, universities and of course with the innovative projects in the area of information technology which are created for the new generation. In 2005 Armenia joined the Bologna process, formed a new opportunity platform for cooperation with the European realm and obtained new mechanisms for using the best international practices. With this regard, I am glad that in Armenia we have the International School in Dilijan which is part of the United Colleges of the World educational network. The School has brought together over 100 students from almost 60 countries. In Armenia we do our best to ensure the most secure and substantial future for the future generations, remaining true to the idea of sustainable development and peaceful coexistence through education. The State and private sector in close cooperation comprehensively enhance impulses of the young people who value education. Lyus Foundation established by me provides financial support to the students from Armenia and Diaspora who are accepted to ten best universities of the world. When we started the program there were only 8 citizens of Armenia studying at twenty best higher education institutions of the world. In last eight years, we have been able to give education to over 200 students that studied in ten best educational institutions of the world. At this very moment, one hundred of them are receiving education in these institutions.

I will be visiting the Unites States soon, and among other events we will be having a large meeting with the Luys students and Armenian-American scientists at the Massachusetts Technological University. The event will allow them to communicate, to establish academic and professional ties.

We encourage the development of the knowledge based branches of the Armenian economy through different awards and competitions. It is applicable particularly in case of information technologies, where along with the awards established for the young people we also have a special award for those who have made a contribution to the area of information technologies at the global scale. Today that area is the most rapidly developing area of our economy. In this very area we witness a considerable inflow of foreign investments.

I have mentioned just some of the platforms where the Armenian and Cypriot youth can unfold efficient cooperation. I believe you are aware that Armenia maintains a years-long efficient cooperation with Greece in the military and civil education area. We can start a mutually beneficial cooperation in this area also with Cyprus.

Taking this opportunity, I would like to once again extend my special thanks to the President of Cyprus, my good friend Nicos Anastasiades for the invitation. I thank you for hosting me in this educational center.