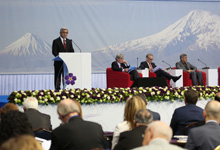 One year ago, on the eve of the Armenian Genocide Centennial, I had the honor to declare the launching of the work of this Global Forum, with a strong faith in its mission and success. That mission was to identify the issues related to the prevention of genocide, develop the avenues for their resolution and consolidate the potential of the civilized humankind in order to register a decisive victory over the crimes against humanity in the 21st century.

Today, as one year has passed since then, I can state with the outmost certainty that we have achieved those objectives: the first forum found extensive response both with the expert community and thousands of people both in Armenia and way beyond its borders. It provided with an opportunity to the world to discuss anew genocide as the gravest crime committed by human beings. That was a reason good enough for us to make this conference a permanent platform for those individuals, genocide survivors, their successors and, of course, States and international structures that are determined and consentaneous to make their contribution to this universal struggle.
I warmly welcome you all, and I am very glad that we are united.
Ladies and gentlemen,