Speech օf the President of the Republic of Armenia Serzh Sargsyan at the meeting of His Holiness Pope Francis with the representatives of the Armenian authorities, public and diplomatic corps accredited in Yerevan 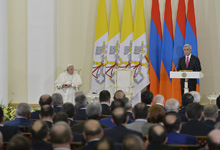 Your Holiness,
Eminences,
Dear Guests,
What a special day the Lord has made for us.

It is an immense honor for our people and me personally to welcome the leader of the Catholic World, His Holiness Pope Francis on the Armenian soil, which was the first to adopt Christianity as a state religion and withstood sufferings through millennia for the Christian identity and values.

Your visit was long-awaited in our country. With Your dedication to humanitarian ideas and the universal values of love, peace, and kindness, and with your constant care for matters of concern to the Armenians, You enjoy the great respect and admiration of the Armenian people.

Thank you for gracing us all with this warm historic moment. Thank you for bringing blessing, happiness, and peace to our nation with your presence, for filling our homes and hearts with warmth. Approving the official motto of your visit as a “Visit to the First Christian Nation” and characterizing the trip as a “pilgrimage” by Your Holiness, bears testament to the care Your Holiness has towards our country and our people. It equally attests to the unique bond between the Roman Catholic Church and Armenian Apostolic Church. For this, we are thankful and grateful to you.

15 years ago, in 2001, the visit to Armenia of His Holiness Pope John Paul II was on the occasion of the 1700th anniversary of declaring Christianity as the state religion in our country. Today, this historic visit of Pope Francis signifies another key anniversary—the 25th anniversary of restoring independent Armenian statehood—a cherished celebration for every Armenian.

Throughout the voyage of our millennia-long history, the Armenian people have faced many hardships — from Genocide and foreign oppression to indifference of friends and denial. It faced but never lost the ability to believe in the ideals of humanity, tolerance, and solidarity. It never lost owing to the faith, the values, the peace-loving nature, and for the great humanists who extended a helping hand.

One cannot but believe in the Triumph of Justice when in 100 years, a timeframe that divides 1915 from 2015, the message of justice is being conveyed to the mankind from the heart of the Catholic World heralding that the first of the mass atrocities having affected the humanity, the Armenian Genocide, is a historical fact and an undeniable reality; when notwithstanding all circumstances falsification and denial start to shake in the face of historic justice. This was testified by the new wave of recognition of the Armenian genocide that followed the Mass celebrated by Pope Francis.

We don’t look for culprits. We don’t spread accusations. We simply want things to be called by their names, as it will allow two neighboring peoples to move towards genuine reconciliation and a shared prosperous future by recognizing the past and embracing forgiveness and a clean conscience.

The Armenian people's decision to declare Christianity as a state religion in 301 was indeed a key event in world history. However, it went beyond defining the destiny of the Armenian people: the Christian Faith became the hallmark of the Armenian identity, predetermining our historical course and the values and culture that steered us to the 21st century, to the present, to this historic moment.

Christianity is deeply-rooted into the Armenian soil and Armenian souls. To remain faithful to Christianity this is a key characteristic of the Armenian people. There is a reason why Armenian churches and cross-stones can be found virtually any country of the world. There is a reason why Saint Gregory of Narek, a bright child of the Armenian people, was declared Doctor of the Universal Church, the highest title of the Catholic Church, joining the 36 greatest thinkers in Christianity. It is an honor, a milestone in the appreciation of the nation, which reaffirmed the same-source Christian value system underlying the bonds between Armenia and the Holy See.

Christianity is more than a religion for us. It is a lifestyle, one that instilled in the Armenian people the desire to live in peace and the philosophy of overcoming difficulties with dignity. The more Christian we became, the more we respected and appreciated the faith of others, the more tolerant and peace-loving we became, capable of coexisting peacefully with other peoples and taking even better care of the spiritual-cultural legacy of others on our land.

Examples of inter-religious friendship are numerous. Cooperation between the Republic of Armenia and the Islamic Republic of Iran is a case in point. Or, in the Middle East, until the unfavorable developments of the recent past, the presence of peaceful and prosperous Armenian communities and their harmonious coexistence with the host nations and national and religious minorities. We are watching with great sorrow the practices of vandalism and xenophobia in the Middle East, the only aim of which is the deletion of historical memory from those areas through a cultural massacre.

As you rightly noted in your address on 12 April, the peoples of this complicated region of ours need peace, referring to the peoples that, in the past, despite their differences and pressure, enjoyed extensive periods of peaceful life and even helped one another in times of hardship.

Today, Armenia still aspires for peace. In any event, we prefer peaceful negotiation to shooting. We are ready for peaceful regional coexistence, as hard as the road to peace may be. It is perhaps because durable peace is based upon the idea of people's freedom and free expression of will.

I am an optimist: I believe that humanity’s dreams of freedom and peace, cherished for centuries, will become reality one day.

Welcome to the First Christian Nation.