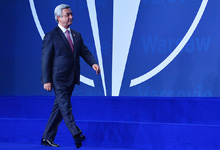 We are all here united by the idea that it is necessary to provide the friendly people of Afghanistan with peace, security and stability.
Armenia, as an advocate for the cooperative security, is determined to make its modest contribution to the efforts in consolidation of international peace and security. In the course of the Peacekeeping Summit, which took place in New York in September 2015, Armenia undertook additional commitments to develop capabilities such as Role II medical hospital and training of associated personnel, as well as training of a company of EOD/C-IED (Explosive Ordnance Disposal & Counter-Improvised Explosive Device). We have reiterated our engagement with up to 130 servicemen with the Resolute Support mission, and stand ready to continue with it also beyond the year 2016. In this context, I should like to underline the effective cooperation we have enjoyed with Germany, and that, in my view, is one of the best and most illustrious examples of a partnership between a NATO member State and Partner Nation.
We have also expressed our readiness to participate in the NATO Enduring Partnership mission, when it will replace the Resolute Support mission. With that objective in mind Armenia has already engaged with the planning process for the establishment of a civilian-led temporary presence.

Armenia is also an active advocate for peace and stability in our region, and it has always stood for the peaceful settlement of the Nagorno Karabakh issue, which is the most vital issue we face. On May 16 in Vienna a meeting took place with the high representatives of the OSCE Minsk Group Co-Chairs, namely the U.S. Secretary of State, Russian Foreign Minister and French State Secretary for European Affairs, which resulted in their Joint Statement that reiterated that there could be no military solution to the conflict, and further underlined the importance of respecting the 1994 agreement on ceasefire and 1995 agreement on consolidation of the ceasefire regime, both of which were unconditional.
Meanwhile, the Statement also registered introduction of the OSCE investigative mechanism to record the violations of the ceasefire and expansion of the capabilities of the existing office of the Personal Representative of the OSCE Chairperson-in-Office. These approaches were further consolidated in the statement adopted by the trilateral meeting held in Saint Petersburg with the participation of the Presidents of Russia, Armenia and Azerbaijan. As for the allegations voiced by the President of Azerbaijan, I don’t believe it is appropriate to artificially turn this meeting and the NATO declarations into a platform for the discussions of the NK issue: there is a specialized structure for it. I see it as my duty to underscore that today the main obstacle on the road towards the settlement of the conflict is the policy conducted by the highest leadership of Azerbaijan and the lack of will to solve the problem peacefully. It was vividly demonstrated by the aggression unleashed by Azerbaijan against Nagorno Karabakh last April, which was a heavy blow to the efforts carried out by the Co-Chairs of the OSCE Minsk Group and aimed at the peaceful settlement of the issue. The status quo will change when the people of Nagorno Karabakh will received the opportunity to exercise their right of self-determination.