Address of the President of Armenia at the meeting with the representatives of the society, authorities and clergy 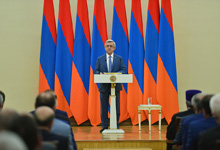 Yesterday, the situation created as a result of the assault by an armed group on the Police station was finally resolved. It was resolved in a way which was probably the most acceptable for all of us: the National Security Service, Police, State Security Service, the Ministry of Internal Affairs through their consistent and coordinated activities compelled the members of the armed group to put down their weapons and surrender to the authorities. I am very glad that we were able to avoid the “classical” scenario of resolving situations such as this one even though the detailed plan for the implementation of such option was certainly on hand too.

We suffered two losses and have many injured. I express my condolences to the family and friends of the Police Force serviceman, Sergeant Yuri Tepanosian. We convey our admiration and respect to the family of Colonel Arthur Vanoyan. He was a true devotee, who had steadfastly passed from the Artsakh liberation war up to the April war, but was killed by a bullet of his fellow citizen at the moment when he was carrying out his duty towards Fatherland. Glory to you, proud Colonel!

As I have already noted, the state bodies of the Republic of Armenia took all conceivable measures to avoid human losses. With this regard, I first of all express gratitude to the representatives of the law enforcement bodies for their work. Composure and magnanimity signify professionalism and understanding of one’s own power. You have manifested them in full measure. I thank you for your expert work.

I also thank those who took the Hippocratic Oath – our doctors and medical workers for their awe-inspiring stance; I bow to their professionalism, to their courageous spirit.

I express my thanks to our General, Hero of Artsakh Vitalyi Balasanian who these days has become the voice of reason.

The unacceptable situation has come to an end; however its full resolution lies ahead. First of all there needs to be made a thorough investigation, a comprehensive and unbiased examination, and an open trial. Every single person must answer for his actions only and only before the law. There will be no other options; any attempt of personal vengeance will be stopped by the law. All processes unfolding in the Republic of Armenia will take place exclusively in the framework of the RA Constitution and laws.

The time has come to draw conclusions. A full analysis of these events will take a long time. However one thing is clear: the process of the radical changes in Armenia’s social and political life must be expedited. First of all, the very existence of the disastrous tendency to solve problems through violence must be eradicated. We have no right to tolerate even a intention of solving problems by force; the next one can be disastrous for our state.

Last two weeks and the losses we suffered in the course are unacceptable – human, social, loss of values and the huge blow which our economy has suffered. No country in the world can afford such thing to happen; moreover Armenia had no right to do it.

Yerevan is neither Beirut nor Aleppo. Let no one aspire to import Near East solutions of the previous century, of the Cold War to Armenia. Let those who don’t comprehend this need to look at the history of Lebanon’s civil war or at the consequences of the civil war going on the moment in Syria and draw conclusions.

I express gratitude to all political figures who have manifested themselves as true political and state figures and comprehending all that was going on from day one spoke about the unacceptability of the events. Unlike a few short-sighted persons, they understand only too well where ends the line of political competitiveness and starts the security of Fatherland. Critical situations often become litmus tests, pointing out for the society and history mature persons and singling our short-sighted one and adventurists.

I also thank our prominent culture figures, our public figures, our true intellectuals who understood very well that through the public condemnation of the unacceptable steps, conveying the word of reason to the members of the armed group, they contributed to a bloodless resolution of the situation, and showed these men a safe way out. Alas, those who were cheering them up unwisely didn’t understand that spilling out the spite accumulated in them they did a terrible thing and in reality led the armed ones to destruction.

Thanks God, good reason is prevailing in our country.

In Armenia a simple truth, which it seems could not be debatable in the first place, has prevailed. That truth lives in our system of values, in our mentality, in our kind, and is about our heritage. Anyone can dislike the authorities, or the government, or the President, can be categorically against our policies. However, dislike cannot be a reason for glorifying those who attempt to solve problems with arms. Authorities come and go; encouragement of terrorism will remain as cancer and will spread; it will ruin everything our nation has created. It is dreadful, it must be fully eradicated. Ladies and gentlemen, dear young people, the encouragement of terrorism is a mortal sin. Stay away from that horror no matter what’s the reason, even if it’s the most compelling reason. Say no to terrorism and all its manifestations. Say no in the name of our country, our nation, our generations, our Fatherland. Say no to that cancer. Toss it away, far away. I ask you.

I thank our journalists and reporters for their dedicated work and for working for a bloodless resolution of the situation. I also apologize to the journalists for the events which took on the night of July 30; during these events it was our greatest blunder. Certainly, conclusions will be made. I ask for our indulgence, I ask journalists but not the low enforcement personnel to forget about these events, because I am confident that it will never happen again. I also want these events to have no event subconsciously an impact on the freedom of your work.

Now about the criticism which has been voiced. I am not talking about the armed persons that were acting in a distinct terrorist style and were hiding their intentions under the slogan of patriotic and social justice. I am talking about concern which is present in some segments of our society. Yes, it is true that the Armenian authorities are not perfect. Yes, it is true that there are many problems and complex issues in Armenia. Our goal is to give them a speedy resolution.

At this stage our goal is also to form the authorities of national accord, in which issues will be solved under a wide consensus. The constitutional reforms are aimed at exactly that; the reforms have given a base for the formation of such authorities. A government of national accord is not about a lost someone who is trying to make his way to a high position; it is about the widest possible distribution and sharing of political responsibility, and have already provided for its entire institutional base. I state with confidence that only months later we will have a government of that kind, authorities of that kind.

I would like to speak about another issue, which we have spoken about on many occasions. It is about the Karabakh issue and so called “surrender of lands.” My personal statements with regard to our clear-cut position on that are probably numberless. I repeat once again: there will be no unilateral concessions in the resolution of the NK issue. Never. Nagorno Karabakh will never be part of Azerbaijan. Never.I repeat once again:it is out of question. I have given my entire adult life to this. To get to the solution acceptable for my nation, I have always been ready to sacrifice any position, and also my life. It is like that today, it will like that tomorrow.

I conclusion, I would like to stress that we as a state have emerged from that calamity event stronger. Today we are even more determined to move with doubled speed towards the implementation of the agenda of positive changes in our country. We will talk about it in a greater detail very soon.