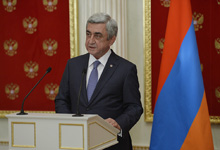 Firstly, I would like to thank President Vladimir Putin for the warm welcome.

The high level active political dialogue reflects the level of relations of our two countries. The relations encompass all vital areas for our two countries, from the allied partnership in the framework of the CSTO to the economic integration in the framework of the Eurasian Economic Union, as well as close cooperation in the humanitarian area. Ties between our regions are widening, and in this a great role is ascribed to the regular inter-regional Armenian-Russian commissions, to the direct ties between the subjects of the Russian Federation and marzes of the Republic of Armenia. We highly value Russia’s role in the world and particularly in our region where numerous processes, which have their impact on stability and security, are going on. Armenia has been watching closely intensive foreign policy contacts of the President of Russia in the recent week which is totally understandable considering the fact that Azerbaijan, Iran, and Turkey are Armenia’s neighboring states. I thank the President of Russia for the detailed account of these meetings and I am confident that Armenia only benefits from a greater involvement of Russia in our region. Today, we have discussed noticeable success reflected in the encreasing turnover between Armenia and Russia. This is an unambiguous answer to the skeptics who were claiming that Armenia’s membership to the Eurasian Economic Union will not give Armenia any advantage. It would suffice to say that despite all international difficulties and hurdles, our turnover has registered an impressive growth, while exports from Armenia to Russia in the six months of this year have risen by 90 percent, reaching their semi-annual historical peak. I am confident that we will be able to uphold and develop this dynamics because the trade and economic potential of our countries even today is not being used fully.

I once again thanked the President of the Russian Federation for the efforts which Russia, as a Co-Chair of the OSCE Minsk Group in cooperation with the United States and France is exercising for the peaceful settlement of the problem and for the great personal input of President Putin to the process. Two years ago in Sochi we discussed in detail principles and approaches for the resolution of this difficult problem. These principles are invariable. Conflicts like this cannot be solved referring to its consequences without eliminating the causes. In the core of the Karabakh conflict is the struggle of the people of Karabakh for the right for self-determination. This is an unalienable right of any nation. The key to the solution of the problem lies in respecting that right and its implementation. This was the topic of our detailed conversation with the President of Russia today. A peace process related to such a sensitive topic or negotiations are never easy. Any step which may tip the scale, create winner and losers are doomed to failure and will create new tension. Every side should win as a result of practical, clear-cut and doable decisions, which will be based on mutual respect and trust and not on hatred and xenophobia.

Mr. President, the topics of peace and solidarity are particularly current during the Olympic Games. We will once again wish success to the teams of Armenia and Russia and will rejoice on the success of our and your athletes. We are very proud that the RF sportsmen of the Armenian descent have registered excellent results. Several months ago in Yerevan was opened a figure skating school after the world legend Irina Rodnina. I am confident that joint victories and achievements in sports reflect reciprocal sentiments of our two peoples. As the saying goes “There is healthy mind in a healthy body”.