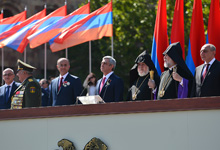 I congratulate all of us on the occasion of the 25th anniversary of the independence of the Republic of Armenia.

We have made our choice by casting a ballot on this very day a quarter-century ago, but we are well aware that deep in our hearts and in our collective memory we had made that choice much earlier. We chose freedom at the times of Patriarch Haik. We are faithful to the decision that we had made back at the times of a bow and arrow. Today, at the 21st century weapons have changed, but we have not, and we are determined to defend our liberty. And this parade is a testimony to that.

In the ideal world the right, of course, is the source of might. Nevertheless, the contemporary world and our environment are far from being ideal. There are still circumstances, in which the might is the source of the right. We have got both our right and might to defend our freedom. And this parade is a testimony to that.

Freedom and independence need to be defended not exclusively from external threats. The domestic social and political life is no less important and vital to us. Our citizens should be free since a free individual and a free society function way more effectively. We can and we shall continue building an efficient nation, which will defend a free citizen and a free society. Unfree people theoretically can create a lot but not happiness.

In the course of the past 25 years we have registered irrevocable achievements. Occasionally we have made mistakes, occasionally we have run into the extremes, but at the end of the day we have been moving in the right direction. We are building our happiness with free thoughts and free hands, which means we produce peacefully and creatively. And there is only one obvious prescription as to how we shall move forward: it is to work hard, harder and harder.

Indeed, we highly value our achievements since we have paid a dear price for them. We shall multiply those achievements with our hard work and defend – with the might we have accumulated.

Long live our boys that vigilantly guard borders of Armenia: they are the primary guarantors of our freedom. Glory to the immortal heroes who fought in the Artsakh liberation war, to each and single brave fellow of ours. Glory to the young lions of this April, who wiped out all the hostile planning of our adversary. Some months ago at the grave of scout-machinegunner Sasun Mkrtchyan I promised on behalf of all of us that we would continue the sacred mission of Sasun and his friends, we would always keep lit the light that emanated from the new generation of Artsakh and Armenia, that had united all of us during those April days; united as a fist, ready to crush the head of the adversary that threatened our security. And we will keep our word. And this parade is a testimony to that.

Long live the citizen of the Republic of Armenia, a soil cultivator and construction worker, a physician and teacher, a miner and entrepreneur, a civil servant and artist. Glory to the citizen of Armenia, who establishes new values.

Long live the trilateral unity of Armenia-Artsakh-Diaspora: by joining our forces we are getting much stronger than one could imagine.

Long live our brothers and sisters that represent Armenia’s ethnic minorities, who enjoy equality and share responsibility in the consistent pursuit of the cause for development and defense of our country.

Long live the traditional Armenian family, which in spite of all currents remains the source of warmth that gives birth to heroes and brings up generations thirsting for knowledge.

I again congratulate all of us and Armenians around the globe with the quarter-century anniversary of the reestablishment of the independent Armenian statehood.