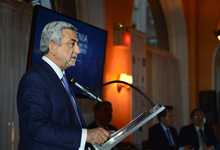 I am delighted to greet you all at this landmark event, which comes at a symbolic time for Armenia and Armenians around the globe. Having summed up 25 years of independence, Armenian nation continues to pave its way towards future. The past two and half decades have been challenging, yet equally rewarding. After 25 years of independence we look into the future with confidence, determined to build upon our achievements that we have attained through the hard work of our people and with the help of our friends and partners.

It is no coincidence that Armenia as a gateway to major markets has been selected as a heading for this event: Armenia’s role as such had been determined at the time primordial, outlined by the history and geography of our land and the identity of its people. Situated at the crossroads between continents, Armenia has always bridged various civilizations, thus becoming a very important center for the cultural and trade exchanges. True to its role and given its historic experience, modern Armenia adheres to a strategy designed to build bridges among its major trading, economic and political partners.

As any other country, Armenia has its own comparative advantages. Interestingly enough our comparative advantages as an economy to a certain extent grew out of our limited resources and disadvantageous geopolitical realities. A landlocked country with a small-size economy that had been inherently Soviet-styled, with no energy resources, and blockade imposed by some of our neighbors, we never surrendered to those impediments. Quite to the contrary, we took advantage of those to push the boundaries of our creativity and competitiveness. Thus, human capital has become the source our main wealth, efficiency has become our master tool and reconciling often opposing interests has become our lifestyle.

Although the financial crises did not pass by Armenia, we made significant strides in building a knowledge-based society and the constant drive to embrace cutting-edge innovation have placed our country of just 3 million among technologically advanced nations. Notwithstanding the financial resources available to it, almost every single Armenian family strives to heavily invest in the education of their children. It is quite natural that for many years now our schoolchildren at the World Subject Olympiads win over 20 awards.

Today we are leading the list of the ranks by countries for the young students per capita wining world prizes in mathematical Olympics. In the same vein, we have the highest number of Chess grand masters on per-capita basis. Incidentally, Armenia was the first country in the world that introduced chess in the school curriculum in order to promote strategic thinking among new generation.

Another interesting example to that effect is the Tumo Center for Creative Technologies that provides secondary and high school students with an opportunity to convert their ideas into IT solutions and products.
Luys Foundation was established upon our initiative back in 2009; since then it has provided with scholarships Armenian students around the globe to attend and study at the top-notch universities in order to make sure that Armenia keeps up with the developments of our times.

Today, the availability of qualified workforce and a highly developed human capital brought fame to Armenia among those who seek accessible innovative IT solutions. We are becoming a desired destination for carrying out R&D and complex projects, as well as undertake the design and production of high value added, sophisticated products.

To give more momentum to the development of Information and Communication Technologies we provide tax privileges to the start-ups exempting them from profit tax and levying only 10% tax on income. As a result in recent years we have seen 25% average increase in the field of ICT.

Other than IT, Armenia has also been successful in the area such as medical and especially dental tourism, providing best money for quality services.

Year in and year out we have been developing our capacity for providing high-quality education, which also create opportunities for foreign students to study in our country. A great example to that effect is the Dilijan International School, which makes part of the United World Colleges education network. It received students from about 60 countries, and some of them are from the most advanced ones.

In the course of the past 25 years we have implemented cardinal reforms that improved Armenia’s performance in the international rankings: according to the World Bank estimates, among 189 countries Armenia ranks 35th on the ease of doing business, 5th on starting business, and 29th on trading across border. Today Armenia stands out for excellent investment opportunities due to its liberal business culture, favorable business environment and an unswerving commitment to the ongoing reforms.

Today, our geographic location and political and economic arrangements with partner nations enable Armenia’s easy access and trade with markets of more than 300 million consumers, where many Armenian goods and services have already established brand value. As a member to the Eurasian Economic Union, we have customs-free access to more than 180 million consumers. A common border and visa free regime with the Islamic Republic of Iran open up a market of 80 million consumers. Historically friendly relations with Georgia give us access to the Black Sea ports as well as safeguard Armenia’s trade turnover with Russian Federation, other EEU countries and the European Union.

The forthcoming opening of the major infrastructure projects such as North-South highway corridor will make Armenia the shortest transit route connecting Persian Gulf to the Black Sea ports. Besides that, shared values with the EU have opened up privileged trade opportunities for Armenia with the EU as a part of the GSP+ arrangement.

China increasingly becomes more engaged in the Armenian market with new economic prospects, also through the project of the Silk Road Economic Belt. Besides that, we enjoy historically close relations with various Middle Eastern countries with whom our trade volumes have been growing consistently over the past few years.

I would like to especially underline the advantage we enjoy due to the presence of the large Armenian Diaspora around the globe. Due to these fellow Armenians we have been recognized widely at the markets of the countries that are important for us, and we have been able to quickly get acquainted with the internal dynamics of the targeted markets and establish contacts with their business circles. In the same vein, through the diaspora we are able to spread the word on the economic attractiveness of Armenia to the foreign investors. Since the independence was attained numerous entrepreneurs from Diaspora have made significant investments in Armenia; they also have established enterprises through which they contributed to the economic growth of ours and instilled best business practices in Armenia.

Armenia provides stable macro environment, which is the major precondition for businesses in seeking stability for their investments. Recent developments in the region and in CIS countries, with skyrocket currency depreciations, attest to Armenia’s capacity to cope with external negative shocks while keeping macro-environment stable and predictable. Armenian government and Central Bank effectively anchor public expectations allowing Armenian dram to depreciate in line with the path of economic fundamentals. Looking to the future Armenia will strongly continue to follow the golden rule of maintaining macro stability through the application of effective fiscal and monetary policies.

We most certainly are committed to further enhancing the business climate of the country. Our utmost priority is the introduction of a digital governance to provide for the services in line with the requirements of our people and business circles appropriate for the 21st century. For instance, nowadays everyone can track all treasury expenditures in real time, submit inquires and questions to our public service and follow up on the status of their applications online, to receive licenses and other state service electronically.

A lot more is envisaged to make business environment in Armenia highly efficient, especially with significantly improved customs and tax services. A week ago Armenia’s parliament adopted a new tax code that provides for a number of benefits to business and investors in Armenia. We have simplified the procedures followed by our tax administration bodies, thus making the tax monitoring processes much more business friendly.

Recently, we’ve committed ourselves to making our business environment much more stable and predictable through the application of judicial reforms and a commitment to strong principles of investment protection. These principles are in fact embedded in the Constitutional reform we have adopted in 2015. This reform will result in the soon to follow transition from the semi-presidential mode of governance to the parliamentary one. That initiative was also conditioned by the economic considerations since the parliamentary mode of governance, in our view, will be more effective for our country, also in the economic terms.

The new cabinet, which was formed just a few days ago, was been mandated to take bold steps to further enhance legal and institutional reforms, making the investment environment of Armenia much more attractive for both local and foreign investors. To this end we have reformed the Ministry of Economy into the Ministry for Economic Development and Investments in order to provide the entrepreneurs interested in investing in Armenia with a political platform to raise the issues they face and find solutions to those issues. Furthermore, we have empowered the Development Foundation of Armenia, which acts as an implementation agency, to assist foreign investors in all matters.

We see the engagement of international investors as an essential component to boost Armenia’s economy. Therefore, we commit ourselves to tailoring legislative solutions for global actors, who would wish to partner with us in making our vision of Armenia as one of the most efficient, secure and profitable opening to the major markets in the region to come true.

We look forward to seeting you all in Armenia.

I thank you very much for your attention, and I would be happy to take your questions if you have any.