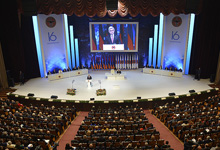 Thank you. Thank you for re-electing me as Chairman of the largest political structure, Chairman of the Republican Party of Armenia. We are entering a rather serious period of time, and there are many things to do but we have a united team and years-long rich experience. Now, based on that experience I would like to state seven principles which I have been guided by as the leader of the Party. I expect adherence to them from all Party members regardless of their position in the society.

As for our young colleagues, let the new generation of the Party members take these points as seven pieces of advice which they have to follow at all times.

The first advice for our reestablished statehood is this: your number one concern is the security of our country. Freedom of our people and the will of the citizens of Armenia to be free and independent in their own country are our greatest values. Our ultimate duty and concern is to protect them from any encroachment. It deserves the greatest sacrifice. Our collective sovereignty and freedom deserve to be as boundless, as boundless were our nation’s sacrifice and sufferings to regain them.

The second advice – channel your efforts towards the strengthening of law and justice in our free and sovereign state. Remember that before directing others towards law and order, you have personal responsibility to be humble servants and embodiment of the law and order. The last two and half decades of our statehood has proved that deficient laws in the hands of those who implement them consistently can bring a greater benefit than the best of the laws in bad hands.

In the end, what’s the worth of the sovereignty to adopt laws if you are not following them? What’s the worth of your freedom if you don’t respect its boundaries? It is inexcusable when the boundaries of the rights and law are violated by those who have created these boundaries. There will be no establishment of legality through illegal means. Freedom and rights of our people deserve to be protected in the same measure as they have been through the centuries. They deserve as much respect and persistency as the blood lost by our predecessors and contemporaries on the road towards them.

The third advice – peace on the borders is inviolable as long as there is peace inside the borders. And if our soldiers guard the peace on the borders, on this side of the borders it becomes your responsibility. Don’t estrange anyone and don’t turn from anyone for good. Don’t look for enemies inside, don’t make enemies and don’t become enemies. Intolerance or calls for dispossession will get you nowhere. The most painful decision will not create enemies if all arguments have been heard and everyone has had a chance to speak out. Always be strong and available to address people’s needs. Listen to the people’s desires and concerns. Hear out all and speak to everyone. Law is an amalgam of strength and persistency, and if the people are the boundless source of strength, persistency depends greatly on the leader and political figures. The ultimate guarantee of peace at the borders of the country is arms and troops. Inside the country no weapon can establish peace. The only means to establish peace within is trust – trust towards each other. Earn people’s trust with your consistency. The fabric of our newly independent canvas is woven with the threads of trust. Make these threads stronger and multiply them. Rely on your only true and dedicated ally – the people, people’s strength. Bridge the isles of mistrust with the trust towards you. Our people deserve as much of peaceful and undisturbed life as much it was insecure and voiceless in the days of partition and commotion. Our people deserve light and peace, deserve as much as they were resentful towards each other for centuries and millennia.

The fourth advice – eyes which are following challenges only, miss opportunity after opportunity. Direct your efforts towards finding new opportunities for our creative people. Look for them everywhere, look into the endless steppes and oceans of the world, look into huge markets and new technologies. Integration processes are not imposed: there is no other way towards new opportunities, new markets, new partners, new knowledge, and new skills. The innovative spirit of our nation and inquisitive mind deserve as many possibilities for work as huge were obstacles and restrictions to get them.

Let your fifth effort be aimed at ensuring prosperity, work and safety, entrepreneurship and innovative advancement of the citizens of Armenia. For our small but forceful nation advancement holds a great import. We ought to be able to change – self-preserving but at the same time constantly evolving. We need to avoid political, economic and social shocks and move forward, we need to reform our political, economic and social structures but the reforms should be carried out as painlessly as possible, with no great losses.

Our patient people deserve that advancement. Try to master the art of advancement, try to ensure a normal life for the people and businesses, law and order in the phase of necessary reforms and try to uphold lawfulness through the implementation of the reforms.

Be fast without being fussy because every true progress, every stage of it has its own logical process, its pulse, its pace of growth. Our people’s advancement deserves achievements as uninterruptable and irreversible as irreparable were the losses and painful our shocks.

Channel your sixth effort to bridging the past and the future of our glorious nation. This is another pledge of eternity for a small nation. Yes, we are few in numbers but our history reaches the origins of civilization, its roots and if those who created our millennia-long history stand next to us, our forefathers, the immortal legacy which they created and passed on to us, you will see that there are very few such numerous, such powerful and such wealthy nations in the world. A large nation, which left the cultural heritage of the ancestors behind, will sink into oblivion. For a nation, which cherishes and upholds its values, its forefathers and its past pave the road into the future. Each time you create something new, remember that you get this opportunity to create thanks to all what is considered old or obsolete. Put the brick of the present on the brick of the past. Only this way you will be able to pass on the structures of the future. Culture. History. Homeland. Your heritage tossed away carelessly, will be picked up by the others. The others will claim the honor and the name of your ancestors. Cherish and maintain the rich and diverse heritage of the different segments of our nation. Thus, stand by the new and stand by the old. Stand by success and stand by the losses. Stand by the good and stand by the bad. Stand by your right decision but also by your mistakes – yours and those who were before you. Your generation, our generation can be strong and competitive in this world only because of our collective heritage which exists in space and in time. In this world, the weak and noncompetitive are doomed to remain on the margins of history. Our nation, which saw the dawn of civilization, is worthy to become a prominent witness to all future hours of triumph of the humanity as much as it was doomed to become the victim and a silent witness to the gravest crimes against humanity.

And finally, direct your seventh effort to reassessing the times you live in and tasks they set before you.

The Constitution, laws guarantee the right to be happy and safe, however everyone must work to ensure happiness and safety for all. Do not strive for power if you are not ready to serve selflessly. Power is not a delight but a heavy burden.

Try to solve problems in front of you and trust the problems of future to the generations. Overcome your share of difficulties the way not the make the future generations to carry a double burden. Be prudent in what you do, your work is your greatest legacy. Be realistic, create your plans having in mind the most unfavorable developments; often during the greatest troubles, optimism, hope for the best, trust in your own strength and love for the homeland will become your only allies.

Be optimistic about Armenia’s and our people’s future.

Our people and our state deserve the best.

Each of our compatriots deserves to be the best in Armenia, be the first in the world.
Dear Republicans, be the first rung of the stairs leading the citizens of Armenia towards the best, to the top. Let it be a small but reliable rung.

Thank you. I assure you all once again that I will continue to work with the same vigor as we have been working together in the past.