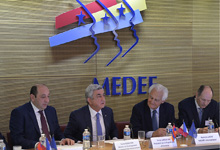 I cordially salute the participants and organizers of this traditional event, aimed at the expansion of cooperation between our two countries.
The historically formed Armenian-French friendly relations form the base not only for our political but also economic relations. This inspires us with confidence that the parties are able to provide for the implementation of pretty large and ambitious economic programs.

In 25 years of her independence, Armenia has registered impressive results. Today we have a sustainably developing Armenia which withstands the often unpredictable changes of the global economy efficiently. Recent developments in the region, which were accompanied by the decline of economic indices and steep depreciation of national currencies, proved the vitality of Armenia’s tax, credit, and financial policies. These policies are constantly praised by our international partners and thanks to these policies our country is able to maintain a stable and predictable macro-environment.
Success of the economic policy implemented in the country is proved by the reputable international indicators, and on this Armenia is registering a steady advancement each year.

Thus, according to the World Bank’s Doing Business report, Armenia occupies the 38th place in the world in terms of simple terms for starting business, while according to the Heritage Foundation’s economic freedom indicator we are at 33th position which means this year alone we moved up by 21 points. Understandably, there are cases when unfavorable positions prompted by different indicators do not play a decisive role in making investments.

For instance, it looks like in case of the neighboring Azerbaijan, which is rich with energy resources, the anticipation of getting super profits, is pushing into the background the indicators which reflect the true situation with the country’s economy.
Macroeconomic stability alone is certainly not enough for sustainable economic growth. From the viewpoint of increasing our country’s competitiveness, the most important thing for us is the constant improvement of the business and investment climate in Armenia, development of human capital, and modernization of the relevant institutions.

We were guided by the same philosophy when undertook constitutional changes in Armenia, which were adopted in December 2015. With the new Constitution we made pivotal changes to our state governance system, switching from the semi-presidential to a fully parliamentary system of governance. It is our deep conviction that these changes will also have their positive impact on the vivacity of the economic life in the country. The new Constitution underscores free economic competition, improvement of business environment, and has provision aimed at boosting up the entrepreneurship. Being a land-locked country with scarce energy resources, under blockade from two neighboring states, we have never bent to difficulties. On the contrary, these factors became a locomotive to move forward with the creative ideas and ingenuity of our people.

Thanks to a highly skilled labor force and human capital, today Armenia has become an innovative country which offers high technology solutions. Efforts aimed at the development of information and telecommunication technologies today yield results. In recent years, Armenia has been registering a 20-25% growth in this area, while its share in the GDP is close to 4%.

Even though the trade and economic indicators in our country are not gratifying at all, considering the entire of the Armenian-French agenda, potential existing in our bilateral economic relations should not be used to promote the commercial ties only. We want the French capital to increase its share in Armenia and are ready to provide favorable investment conditions for French businesses.

With this regard, I would like to highlight the consistent works carried out towards the encouragement of investments and their increased protection. For instance, in the framework of the implemented reforms it is envisaged to secure by law national and most favorable regimes, to define more precisely the guarantees provided to foreign investors, to allow the entrepreneurs to use the existing and future privileges in Armenia and take advantage of the improved mechanisms for the resolution of investment related disputes.

Conditions are being created for the expansion of the state-private sector cooperation. To help the businesses and improve the business climate, consistent steps are being taken to reduce paperwork and simplify procedures, including in the tax and customs areas.

Serious steps are made to develop the export policy. Strategy developed by us stresses the importance of increasing exports because it could become the driving force behind the future sustainable growth.

In recent years, considerable steps have been made also aimed at the increase of Armenia’s limited internal market. It’s been two years that Armenia is a member to the Eurasian Economic Union. The Eurasian integration project has widened the economic borders of its members up to almost 1/7 of the world. It has created a large, almost 170 million strong market with no tax borders.

Days ago, in Brussels together with the President of the European Council Mr. Tusk we announced the conclusion of the negotiations on the new framework agreement with the European Union. The presence in the legal document of the economic component opens new opportunities for the economic activities not only for the Armenian but also European entrepreneurs. Moreover, if used properly and fully, opportunities provided by the agreement allow the economic potentials of the EU and EAEU to be used to mutual benefit.

Our traditionally good-neighborly relations with Iran and economic ties create a good opportunity for the European entrepreneurs to enter via Armenia the 80 million strong Iranian market. The shortest route linking together the seaports of the Persian Gulf and Black Sea also runs through Armenia.

The representative audience present at the conference inspires with confidence that it will be instrumental in opening new opportunities for our countries and for the creation of the best formula to utilize the existing formats of cooperation.
I invite French companies to make investments in Armenia. I assure you that we are ready to show an individual approach to each investment project, certainly taking into consideration the needs of the investor.

Our Minister of Economic Development and Investments will make a more detailed presentation with regard to the possible areas and directions of cooperation. He will also present concrete programs.

I wish you productive work.