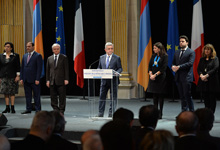 I am glad to be in Paris once again, the city which through the history was “tossed by the waves but does not sink” and continued to flourish and develop remaining forever a unique civilization hub. As justly observed, just a stroll in Paris gives one lessons of history, beauty, and the meaning of life. It is pleasing that through the centuries the Armenian people have had the opportunity to share these lessons, enriching selves and enriching others.

I thank the authorities of Paris, in person of Madam Hidalgo, for this opportunity. It is also thanks to you that decentralized cooperation has found its sizable place in the agenda of the Armenian-French cooperation and with Paris in particular, of course. I highly value the fact that you stand by us at the most important moments: I mean your visits to Yerevan to participate to the events dedicated to the 100th anniversary of the Armenian Genocide and in the framework of the celebrations of Yerevan’s 2798th anniversary. And, Madam Mayor, we will certainly be happy if you visit Yerevan next year when we are to celebrate Yerevan’s - the capital of all Armenians’ - 2800th anniversary.

In the streets of Paris one cannot fail to see indexed trees, thousands of monuments and museums, tourists, which come back again and again, and finally the cordial and hospitable atmosphere of this city. There is no doubt that your boundless dedication and care have also played their role in all this.

I am very happy that Yerevan and Paris are sister-cities and that the efficient cooperation between them is strengthening and expanding annually: every year a number of programs is being implemented in the bilateral, as well as multilateral formats, ranging from cultural programs to experience exchange in the areas of municipal economy and urban development.

I would like to highlight our cooperation in the framework of the Association of the Mayors of Francophone cities. As a result of this cooperation, a number of schools in our capital have received opportunities to organize the enhance studies of French language; renovated and improved have been musical and art establishments, and libraries. The city, which has the largest number of libraries in the world, sets the example for us. This cooperation made French ambiance in our city more perceptible. I hope that the program, which are currently underway, will be concluded successfully: the Armenia Home will open in Paris and we will have the France Home in Yerevan which will allow the Armenians and French feel at home in each other’s capital.

In Paris one understands why after the Armenian Genocide tens of thousands Armenians opted for France and all that is French. Here, even trade is art, and art is a mode of life.

Those people had come and because of your hospitality became the law-abiding citizens of France, respected and wanted professionals. They also came so that today the world can listen to the songs of Charles Aznavour in sweet French, enjoy the beautiful music of Michel Legrand, movies by Anri Vernoy and Alain Terzian.
Allow me address my compatriots present in this hall.

One can state confidently that you have brought your contribution to the development of the French culture and economy. Taking the best of all that is French, you have enriched it with a special Armenian flavor.

Nowadays, when because of a crisis thousands of Syrian Armenians have settled in Armenia, we have come to feel and appreciate that flavor even more. With the Western Armenian of Siamanto and Varuzhan, flavorful Eastern dishes they have brought a new color and a new culture, making Armenia a little different, a little better.
There is no doubt that with you we are stronger, more recognizable and more audible. Be assured that you are always welcome in Armenia as relatives, as partners, as tourists, as indivisible part of the Armenian nation. We are waiting for you to share our success and to stand by you in time of trouble.

In conclusion, I would like to thank you once again, Madam Mayor, for your personal engagement in strengthening of the Yerevan-Paris ties. It was by your decision that on April 24, 2015 the lights of the Eifel Tower were turned off as a token of respect to the memory of the victims of the Armenian Genocide. Let the lights be always bright as a symbol of the everlasting Armenian-French friendship.
Thank you.

After receiving an exceptional welcome in Yerevan only several months ago, I am happy to host you in Paris today. Even though my presentation is taking place in the framework of the President Serzh Sargsyan’s official visit, my happiness today is not just inspired by protocol. It’s a joy which friends live when meet each other, communicate and get enriched with each other’s differences.

It’s a great honor for me to receive this Order from you. For me, it truly symbolizes a unique friendship which unites us, which unites Paris with Armenia. I say welcome to Paris and City Hall which is home to all Parisians. The Armenians living in Paris were able to create through their unwavering humanity a friendship; they are martyrs of the modern history and at the same time the guardians. Today I think of all those who were able to put the same energy in studying France and remembering Armenia, in becoming French and remaining Armenian, in living by French traditions and at the same time preserving the traditions of their ancestors. I would like to recognize the incredible job which these men and women are doing, with whom I have the pleasure to meet and cooperate; that work now is being carried out by the members of the council coordinating the activities of the Armenian-French organizations. Thus, allow me to salute in particular Ara Toranian and Murad Papazian present here for their work.

Today, I want to publicly and solemnly state the words I said in October when you received me. I want to state loudly Armenia’s right to live in peace and security. With the same solemnity I would like to stress the necessity for the international community to recognize the Genocide of 1915 and importance of the criminalization of its denial. Paris has always been and will stand by the Armenian nation to defend the memories of its past and security of its present because the two are indivisible. Towards that end, together with the Yerevan City Hall and the Armenian Genocide Institute-Museum we organized here an exposition and for that purpose we every year hold a commemoration event at the Paris City Hall and at the same time commemorate the survivors and Father Komitas. Continuation of the works aimed at the preservation of the memory is also in our initiative to create a venue in the center of Paris which will immortalize the memories of Genocide and at the same time will signify the rebirth which will imply the destiny of the Armenian nation. I have defended the idea of creating such center from day one and I am hopeful that the idea will be called to life by the state and the region really fast, the city of Paris will be standing by them. I would like to greet the representatives of all municipal units who accompanied me during my visit to Yerevan. From that visit I received an inspiriting and fresh message: first, I saw the pivotal role, which the Armenian society attaches to culture, regardless of the difficulties it faces. I would like to quote with pleasure what one French official said: for the Armenians, to find creative expressions is like to nourish human life.
In the streets of Yerevan, culture appeared to us as a phenomenon endowed by the society with gentle humanity, that is, not as something which remained when all the rest is forgotten but as a phenomenon which we refuse to forget.

In that charming energy of the capital of Armenia I saw the reflection of the wealth which had been preserved and passed on by Komitas. After visiting your country, I believe I started to better understand the immense value of Komitas’s work: on the eve of the horrendous trial, which the Armenian people had to face, through the preservation of the Armenian national culture to save a unique, universal and living part of the Armenian nation.

Familiar with the genius of Komitas, I saw culture in Yerevan not as something rare, which belongs to the cultural elite only but something which is accessible to all and is nourished by all.

We were impressed in particular by the TUMO center. Hundreds of young people, some gifted, some may not so, are studying informatics, open the world of innovative technologies, and will certainly create start-ups. There is no doubt that the Center is an innovative hub but at the same time it’s a territory for the creation of the brains for the future; in France, we don’t have yet such a center. Now, we are working actively to introduce the same great idea in our city.

As you see, Paris and Yerevan, France and Armenia can give each other as much as receive from each other, and that is something peculiar of a great friendship.
I would also like to take advantage of the presence of the Armenian clergy serving the Armenians of France and yours, Madam Minister of Diaspora, to declare that Paris shows full solidarity with the Christians of the East, and with all victims of the conflicts in Syria and Iraq.

That solidarity is very well defined; it is manifested in accepting multiple refugees, creation of the bridges, which are often fragile, sometime successful, but I know that any small bridge is more precious than arrogant walls of the world.

The Armenian clergy walked down that very bridges. Paris owes them tis cultural, intellectual, and spiritual wealth, and the Parisian Armenians are thankful to Paris for the chance to survive and to rebirth in the future.

In honor of these bridges, we have decided to rename one the streets of Paris after Zabel Esayan who was at the pick of the sufferings of the Armenian nation and symbolizes these sufferings.

In Paris, we keep the memory of the torments, which the Armenian nation had gone through, of the resistance and fight but at the same time we open new roads so that they, just like in Yerevan, express hope, inventions, and initiatives.

I wish that the Paris-Armenia dialogue continues remembering the dire days and in the name of a better days, a dialogue with the promise of a great and wonderful future.