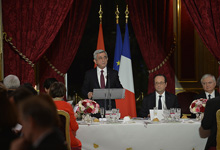 As the saying goes “a friend in need, is a friend indeed.” But it’s also said that “a true friend is one who’s happy for your success.” The glorious Armenian-French friendship proves that when we put together these two, friendship becomes exceptional.

The Armenian-French friendship didn’t start with Armenia’s independence: our peoples knew each other and had the chance to cooperate closely since early Middle Ages.

Back in the times of the Kingdom of Cilicia, Armenian kings were allies and kin of the French monarchs. It is proved by the fact that the last King of Cilicia Levon VI was put to rest at the burial site of French royalty Saint Denis Abbey.

Because of these historic ties, after the collapse of the Soviet Union the Armenian people were quite familiar to the French people and from day one of our independence the interstate relations between Armenia and France soared.

It’s been my great honor and pleasure to work with you for the benefit of this friendship which has been constantly guiding and empowering the Armenian-French interstate relations.

As a result, we have an exceptionally comprehensive agenda, programs ranging from political to economic, from humanitarian to long term development projects. I am confident that this is not the limit: through our joint efforts, we will augment numerous manifestations of our friendship with new ones. As you once said, our philosophy is not shaped by the time or the position we hold.

I thank you and all high-level French officials for this warm welcome, for the atmosphere of mutual respect and trust and the readiness to further promote our relations.

Since my visit coincides with a very beautiful holiday – March 8, I would like to congratulate you, dear ladies and in your person all Armenian and French women, and wish you boundless happiness. Your role in bringing harmony and charm to our lives and policies is indispensible.

Working together for a quarter of a century, at the bilateral as well as multilateral levels, we have travelled a road full of events, have multiplied and deepened the relations which we inherited historically and made them more practical, more substantial, aimed at the future.

Immediately after Armenia regained independence, France stood by our young state and from that day on has been unequivocally supporting the advancement of our statebuilding processes, also as a reliable partner in the European and international settings.

Only a country, which is strong with the principles that withstood the test of time, can offer such friendship, with the readiness to share its own exemplary experience and own accomplishments. This is what makes the French spirit unique for us.
As much as France stands by Armenia, Armenia cares the same way about France. We felt enormous pain in Armenia when the bloodcurdling terrorist attacks happened in Paris, Nice and other places in France, killing innocent people and derailing the normal life of the French nation. We cannot change the past, but the tenacity of the French people and authorities in facing that horrendous challenge is exemplary.
Commendable also France’s and personally yours, Mister President, approach towards the explicit condemnation of the greatest tragedy of the Armenian people. Really, one never knows where one will find consolation and hope. When the Armenians, who had survived the Genocide, arrived to this distant land, thanks to the great French nation they found solace and hope. They built their homes again and started to create again. It is no accident that the Armenian community of France is known to the world for its high level of integration and at the same time for remaining true to the rich national culture and traditions. This phenomenon has been very well defined by our great performer Charles Aznavour who said, “I am 100 percent French and 100 percent Armenian.” This is a source of pride for us and also a very emotional issue.

Without overloading you with the details of the NK issue, I would only like to say that our goal is peace. Nobody has ever achieved anything good with arms, and peace is established where there is the understanding of the necessity to listen to the other party and make reasonable concessions. It is obvious that peace is not the absence of disagreements but the ability to solve them peacefully.