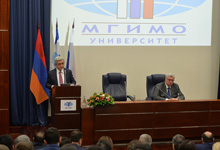 First, I would like to thank for the high honor to be awarded the title of the Honorary Doctor of the Moscow State Institute of Foreign Relations.

We received with great interest the invitation to visit the Moscow State Institute of Foreign Relations which deservedly occupies a place among the best centers for training of the experts of international relations.

Through the years, the MGIMO has produced a constellation of prominent diplomats, political analysts, state figures, scholars, entrepreneurs, and journalists. I would like to note with satisfaction that the MGIMO has been playing an important role in the training the cadre for the Republic of Armenia, who have been utilizing knowledge received in this reputable establishment in the area of international relations, including for the strengthening of the friendly and allied relations between our countries.

I recall warmly the Third International Forum of the MGIMO alumna on the Lazarian Seminary of Oriental Languages in Yerevan.

Dear Students,
Very soon, you will be engaged in the task of solving problems in the areas of foreign policy, international relations, economy and others. Your future success will be greatly conditioned by your understanding of the processes going on in the world, policies of this or that country, economy, and historical background.
As you know, last year we celebrated the 25th anniversary of Armenia’s independence. We have travelled a difficult but commendable road. We started in dire conditions. It would be fair to say that neither of the former Soviet republics had such unfavorable starting conditions. Despite the fact that it was necessary to overcome the consequences of the earthquake of 1988, of the war imposed on us and the resulting huge influx of refugees, the blockade, severed economic ties with the external world, energy crisis, as well as multiple other problems, Armenia undertook bold steps to reinstate her independent statehood. Today the independence generation is gradually taking responsibility for our country which has entered a new stage of statewide reforms. In Armenia, for the first time after the constitutional reforms, on April 2 there will take place parliamentary elections. Reforms carried out today, one year later will result in the creation of a full-fledged parliamentary system, providing for a more active and constitutionally protected role of the political opposition, establishment of a more transparent and efficient system of governance.

Taking into consideration the obvious preferences of the audience, I would like to focus on some foreign policy issues.

Among Armenia’s foreign policy priorities is the consistent deepening and expansion of the allied cooperation with the Russian Federation.

In recent years, the bilateral relations between our countries with their intensity and substance have reached the pinnacle, and most importantly, they are based on mutual trust and on mutual conviction that our cooperation is strong and long-lasting.
This year, we celebrate the 25th anniversary of the establishment of diplomatic relations between the Republic of Armenia and the Russian Federation, as well as the 20th anniversary of the great agreement on Friendship, cooperation and mutual assistance signed on August 29, 1997.

For centuries, Armenia and Russia are tied by the strong friendship of our peoples.
Standing shoulder to shoulder, we overcame all trials of time and history which in turn predetermined the development of our interstate relations in the spirit of strategic partnership.

The unprecedented Armenian-Russian cooperation today is notable for the high-level vigorous political dialogue. It is testified to by the close cooperation in the military, trade and economic, scientific and technical, as well as humanitarian areas, also by the active interparliamentary and inter-regional cooperation.

Armenia and Russia develop multilateral efficient cooperation in the framework of the CIS, EAEU, and CSTO.

Back in 2000, in the framework of the CSTO adopted was a declaration which stated clearly: “Political and military relations between the parties of the Agreement have a priority vis-à-vis the military relations and contacts with third countries, non-members of the Agreement.” It means that everything here is defined clearly, encompassing the entire framework of the issues ranging from political declarations to military cooperation. With regard to this topic, I have to mention that violations of this principle do not add to the credibility of the Organization. Agreements to be observed and implemented fully and not on discretion, depending on the situation. Last year, in the process of working out Armenia’s priorities during our presidency at the CSTO, we were guided by the necessity to further develop the Organization based on the principles of the allied cooperation and its continuity, considering the existing global and regional security challenges. Based on this very logic, we formed an ambitious goal: to finish by 2025 works on the development the Collective Strategy of the CSTO, and we succeeded. The CSTO Strategy adopted last October in Yerevan, set the guidelines for the development of the Organization on all critical directions. It is also important that at the Yerevan Summit of the Organization, the Heads of state adopted a declaration on the unacceptability of escalating the situation in the NK conflict zone.

Before 2016, our partners tried to convince as that by spreading war propaganda and anti-Armenia hysteria, Azerbaijan was solving internal problems. A four-day military escapade unleashed by Azerbaijan against Nagorno Karabakh in April 2016, became the epitome of Baku’s years-long warmongering and militaristic policies – a stark contrast with the will of the people of Artsakh to freely master their own destiny. The Vienna and Saint Petersburg Summits, which followed the April war, confirmed the necessity to unconditionally uphold the unlimited trilateral agreement of 1994-95. Besides, the agreement was reached to install in the conflict zone mechanisms for the investigation of the ceasefire violations as well as to increase the number of the OSCE observers. Nevertheless, Azerbaijan, just as in the past, has been avoiding to honor these agreements.

Armenia, as the guarantor of the safety and security of the people of Nagorno Karabakh, is compelled to take actions aimed at the preservation of the balance in the region, to avoid a new escalation. At the same time, we are ready to respond according to any attempt to start a new war.

War is not a solution to the problem; negotiations have no alternative.
Armenia, along with the Co-Chairs of the OSCE Minsk Group Russia, the United States, and France will continue to exert efforts to find an exclusively peaceful resolution to the NK conflict.

Naturally, I would be remiss not to mention the most pressing issue on the international agenda - situation in the Middle East. Armenia has condemned on many occasions crimes committed by the ISIS and other terrorist organizations.
Their actions threaten the security of the peoples of the region and beyond. The war in Syria has a devastating effect on the civilian population of the country, including the national and religious minorities, whose physical existence is threatened because of the identity crimes against them. Violence has been used against the Armenians of Syria as well, and they suffered many losses. Armenian settlements, churches, schools, and cultural establishments have been demolished. One hundred years ago, after the Armenian Genocide, the Armenian refugees found safe haven in many Arab countries. Today, thousands of Armenians, together with other peoples of the Middle East are once again forced to leave their homes.

More than twenty thousand people from Syria alone have found refuge in Armenia. We know all too well what it means to be a refugee and to receive refugees. The Government of Armenia has taken considerable steps to aid the refugees and help them with integration. We believe that a more extensive international cooperation is needed to solve issues related to the mass movement of people and regulation of the migrants’ flows. I need to stress the importance of eliminating the main reasons of mass movements through the prevention of the crimes against humanity, peaceful resolution of conflicts and establishment of long-term political agreements.
Last fall and in February this year, Armenia provided humanitarian assistance which was delivered to Syria by Russian aircrafts. We are grateful to the Russian side for the assistance in delivering the aid.

It is well-known that sustainable development is the most important prerequisite of security.

Developments of recent years reveal that Armenia endowed with scarce resources has been able to form a flexible economic system. As an example, I would like to mention the area of technologies and telecommunications which in recent years has become a driving force behind our economy. The share of that area in our GDP is close to 4 percent which is comparable to that of many development countries.
Our government has come up with a serious reformation agenda which is aimed at the enhanced quality of governance, investment attractiveness, and to the enhancement of the state-private sector cooperation.

Among Armenia’s main priorities is the consistent policy of attracting foreign investments. One of Armenia’s comparative investment advantages is the existence of the preferential trade regime with many countries. We enjoy preferential trade regimes with the US, Canada, Switzerland, Japan, and Norway, the so called Generalized System of Preferences (GSP), and Generalized Scheme of Preferences or GSP+ system with the countries of the European Union.

We attach great importance to the development of tourism. Starting from February 23, citizens of the Russian Federation can enter the territory of the Republic of Armenia with their internal passports. I am confident, it will have the most positive impact on the increase of tourist flows from Russia. But the agreement itself has a greater meaning and expresses the high level of trust between our countries.

We see Armenia’s economic development in the active involvement of the regional integration units. With this regard, especially important role is assigned to the EAEU. Despite all economic difficulties, positive achievements are obvious. Thanks to the Eurasian integration project, it became possible to considerably mitigate the negative consequences of the global economic developments, which would be much more perceptible in the absence of the EAEU internal market.

Our membership to the Union allowed to enter the almost 180 million strong market; it’s a large-scale market for Armenia which we are utilizing successfully.
It is gratifying that the interest towards the EAEU in the world is growing. Issues of cooperation with China, Iran, India, Singapore and some other countries are being debated vigorously. There is no doubt that it promotes the opportunities of the EAEU on the international arena.

Two weeks ago, Armenia and EU concluded the negotiations on the new framework agreement, whose provisions reflect the scope and level of our relations. They allow to outline the prospects for our mutually beneficial cooperation, mindful of Armenia’s commitments assumed in other integration unions.

Armenia is developing active partnership with the United States on different levels. In recent years, our relations with the Asian-Pacific and Latin-American regions have also intensified. We see a considerable potential for the implementation of the infrastructure projects in the Silk Road Economic Area initiative; it will allow to diversify logistic opportunities not only for Armenia but for other members of the Eurasian Economic Union.

Located in the center of different regions and interests, our foreign policy, based on the millennia-long history, emanates from the conviction that national interests can and should be juxtaposed with the interests of the critical players to provide for peace, stability, and regional security. We are confident that this approach is conceivable and acceptable for our partners.

In conclusion, I wish the Moscow State Institute of Foreign Relations new achievements, I wish the students – future experts of international relations - every success in their studies.

In Fyodor Dostoevskii’s words, “Learn and read. Life will do the rest.”

Thank you for the warm words and welcome.

I wish you all great success.