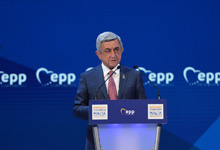 At the outset, l’d like to thank President Daul of the European People’s Party for inviting us to attend this event. Of course, I am also sending all my best wishes to the President Mr. Busuttil at the upcoming parliamentary elections.

I’m glad to register that form the very beginning this year has been very active for the Armenia-European Union relations. A historical achievement was registered in February: jointly with President Tusk, we had announced the conclusion of negotiations on the new legal document regulating our relations-Comprehensive and Enhanced Partnership Agreement. It will open up a new page in the relations between Armenia and European Union, and consolidate its institutional foundations, establishing new opportunities for the further expansion and deepening of our partnership.

Armenia-European Union partnership is a success story, a model of a successful partnership that resulted on one hand from Armenia’s consistent European agenda, and on the other - stemmed from the tailor-made approaches of the recent years in EU’s cooperation with the Eastern Partnership nations. Throughout this process Armenia has vividly demonstrated that it has been possible to make compatible various integration processes while harvesting and sowing everything positive and useful, which unite and does not divide nations.

Just in three days from now on, Armenia will hold parliamentary elections. This is going to be an important stage on the path of democratization of my nation since constitutional reform. Taking into account peculiarities of my country’s development we pursue the objective of taking a decisive step towards building a democracy of European model and further strengthening of the democratic institutions. We are committed and spare no effort in order to conduct elections in line with the highest international criteria. All appropriate international structures, such as OSCE/ODIHR, PACE, European Parliament, OSCE and CIS PAs had been invited to Armenia to observe elections.

We are grateful to the European Union and the European People’s Party for standing by us throughout these important processes.

Few days ago European communities solemnly celebrated the 60-th Anniversary of the Rome Treaty, which established necessary conditions for the current prosperity and sustainable development of European citizens. We, in Armenia closely follow with great interest both those jubilee events and accompanying discussions. The history of the EU is first and foremost one of jointly settling the issues, overcoming disagreements and, last but not least, jointly building the success.

His Holiness Pope Francis had rightly noted on this occasion: “The founding fathers remind us that Europe is not a conglomeration of rules to obey, or a manual of protocols and procedures to follow. It is a way of life, a way of understanding man based on his transcendent and inalienable dignity.”

We believe that European Union will also successfully overcome all the issues and challenges it faces at this stage and it will continue with its unique mission of peace, stability and development for the benefit of both people of Europe and Europe’s friends.