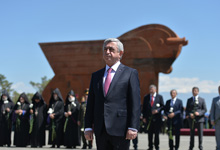 I congratulate us all on the occasion of Republic Day.

Victories of May, 1918 opened a new and glorious page in the millennia-long history of the Armenian nation. In the battles of Sardarapat, Bash-Aparan, and Karakilisa our forefathers had earned our right to live.

Those battles were the last and critical efforts of the nation, which had stood at the brink of extinction, and were called to defend the last piece of land of our historical homeland and to save the last remnants of our nation. That incredible heroic act was made jointly by our people from every walk of life, all strata of its society. They acted with exceptional unity and solidarity, with the selfless courage and adamant will. They acted on the highest level of national conscience and historic responsibility.

The newly independent Armenia was born in flames of the First World War. Every year, we repeat as the oath of allegiance a simple truth: without the May 28, 1918, there would be no Soviet Armenia, and there would not be the present Republic of Armenia.

Throughout the entire history of the Armenian people, we actually never had a greater period of statelessness as the period of time immediately preceding the May 28th. And certainly, we didn’t have a more gruesome and tragic destiny in any other period of time. That is why the reestablishment of our statehood 99 years ago is of double value and importance for us, and today it is sacred for every Armenian.

The Republic of Armenia not only brought statehood to her citizens but also human rights and freedoms, which were secured by law.

Contemporary Armenia was also born in the war flames, but this time it was the Artsakh battle. We, the citizens of today’s Armenia, are true to the promise of the First Republic.

I once again congratulate us all on the occasion of this grand holiday. I wish you all peace and creative work, for the glory of our country’s progression and prosperity.