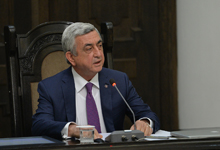 First of all, I would like of course to congratulate you all on being appointed to your posts, or to be precise, on your reappointment as is the case with most of you. Thus, continuity in the proceedings of the Executive is secured, and there are all necessary prerequisites for successful implementation of the ongoing programs.

In my speech delivered on the occasion of Yerevan Mayor’s inauguration I underlined that with the election of the Yerevan City Council we wrapped up the electoral campaign in 2017. With the approval of the Government Program, we can usher in the outset of a new round for the Executive. Our task is to complete this round successfully with no turbulences as far as possible.

In the latest elections, the Republican Party of Armenia won the necessary vote of confidence to proceed with its work. The mandate that we got was sufficient to form a government consisting solely of Republican ministers. Yet we decided to continue cooperating in the format established previously. With our colleagues from the Armenian Revolutionary Federation, we formed a government, which I believe can cope with the tasks set before it.

We will continue to consistently implement the standing programs with a united and cohesive team. The team will act in unity both in the executive and the legislative, as well as at the local self-governance level. Headed by Prime Minister Karen Karapetyan, the Cabinet in office has my full confidence, as well as that of our political team.

At the same time, I have to stress that neither you nor I, in my capacity of President of Armenia and the leader of the Republican Party, have any preconceived stand: we are ready to work with all constructive forces involved in the executive and legislative, the local self-government bodies and even the ones outside these structures.

The only precondition set for cooperation is the respect of the norms of courtesy and integrity. By the way, I should stress that we do not consider criticism as a breach of these norms, especially if it is constructive and is aimed at improving the situation.

Much has been talked about the things we need to do in the coming years and, therefore, there is no need to get into details again. On May 18, addressing the Parliament and the people of Armenia, I presented in detail my vision for the development of the country, including the short-term, mid-term and long-term problems.

Together, we have set forth a range of important targets that are reflected in the Government Program. We need to be more exacting: we should not be satisfied with what we have already achieved. Otherwise, we will not be able to move ahead.

Besides, we are now in the period of constitutional transformations, which means that until next mid-April we will have to make many legislative changes. In order to successfully push ahead with that task, we need to act in a purposeful manner mediating closely coordinated steps between the Government and the National Assembly.

Now, I consider it necessary to touch on the following issue: which way are we going to implement the Government Program?

Transparency is to be one of the most important criteria of our activities. Not only should it be our work style, but also our combined effort to meet the transformed requirements of the Constitution of Armenia and shape a new political culture.

Each of you should personally set criteria and be a role model for the others. You must ensure progress not only in your respective areas, but also provide for our overall progress. You are going to set the dynamism and the pace of that progress.

In this regard, we can draw a few conclusions from our past experience. First, we were able to record some success in the field of reforms that we have presented the public in all detail. However painful, these programs were perceived as highly important and were accepted by society - perhaps at first with some reluctance - yet accepted. The government members should never be reluctant to make their plans clear to the public at large.

Another important task for us is to implement the program of community consolidation. We have to explain consistently the necessity of this reform, the need to use correctly and manage effectively our scarce resources.

Second, transparency is not an end in itself; and indeed, it is not a means for self-expression. The main goal of transparency is to eradicate corruption and protectionism. Public spending, the procurement system should come under the full control of the National Assembly and society. We are currently introducing new and sufficiently influential mechanisms with a view to fighting against corruption that need to be harmonized with our purposeful work.

Third, we will consistently work to improve our foreign political environment without having any illusion. We should work proceeding from the presumption that as of yet there has been no change in our relations with unfriendly neighbors.

A reportedly Chinese proverb has been often cited over the past few years, which says that it is a curse to wish someone would live in a time of change. I think that living in such a time is really difficult, but also exciting.

I expect that you will cope with the problems faced at this important moment with a sense of responsibility and honor. Indeed, we should start to do this job. I do believe that as led by Prime Minister Karen Karapetyan, the Government can live up to the task. We need creative approaches that can break stereotypes. Our people has entrusted you with the honorific task of finding and implementing solutions. Thus, let us continue to work with passion. Thank you and I wish every success to all of you.