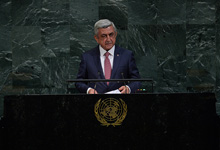 Distinguished President of the General Assembly,
Ladies and gentlemen,

I congratulate and wish success to Mr. Miroslav Lajčák upon his election as the President of the 72nd Session of the General Assembly.

I avail myself of this opportunity and congratulate anew Mr. António Guterres upon his election to the office of the UN Secretary General. Distinguished Mr. Secretary General, we wish you success in carrying out your important mission. The priorities you declared enjoy Armenia’s support.

In 2017 we marked the 25th anniversary of Armenia’s accession to the United Nations. On March 2, 1992 the Armenian tricolor flaunted at this headquarters of the United Nations family as a logical and sought for outcome of the exercise by our people of its fundamental right to self-determination.

Over the years, Armenia has become a fully-fledged and responsible member of the international community. There had been numerous challenges before of us, and we withstood them with dignity. The most important and intricate one was the Nagorno Karabakh conflict.

It is for the fifth time that I have an opportunity to speak from this eminent podium and again I am compelled to address the Nagorno Karabakh conflict. I should have rather preferred to talk of peace, progress and cooperation, but unfortunately we are not there yet. Hence, it is my duty to explain why we are so much away from that desirable stage.

The new phase of the struggle for self-determination by the people of Artsakh began almost 30 years ago. The peaceful calls by the Armenians of Artsakh to exercise their inalienable right to self-determination as well as every step to that effect was met by use force, to which Azerbaijan continuously resorted to.

The policy of the official Baku culminated in the massacres, ethnic cleansing and mass deportation of the Armenian population of Azerbaijan. Once flourishing Armenian-populated districts in their entirety have been wiped out of the Armenians, and the Government of Azerbaijan continues with its policy of systematic destruction of the vast Armenian cultural and spiritual heritage on the territories under its control.

It is obvious that, under such circumstances, the people of Artsakh were left with no other choice than to resort to self-defense. The grievous war of 1992-1994, its aftermath and negotiations that followed did not serve as a lesson for Azerbaijan. Last year in April, Azerbaijan unleashed a four-day war, which came to prove that Azerbaijan pursues the objective of extermination of the people of Artsakh.
In the course of the military offensive unleashed in 2016, the Armed Forces of Azerbaijan committed a number of war crimes against civilian population and the prisoners of war. Here I am compelled to mention that a serviceman who committed such atrocities has been decorated with a high state award, and the President of Azerbaijan personally decorated him in front of the cameras.

It has been for years that hate speech and Armenophobia was made part and parcel of the Azerbaijan’s state policy. It has taken deep root in the school curricula, intoxicating the younger generation. It has been for years that a number of inter-governmental and non-governmental specialized organizations dealing with racism and xenophobia have been ringing alarm bells about it.

All of these leads us to believe that the exercise of the right to self-determination by the people of Artsakh is of existential significance. In this regard, I convey the consolidated view of Armenia and Artsakh as well as the one shared by Armenians from all over the globe. I bring this message from Yerevan, where right now Armenia-Diaspora conference is taking place.

Everyone should be aware that for the democratically developing Artsakh Azerbaijan simply symbolizes medieval backwardness. Azerbaijan has got no legal or moral ground whatsoever to present any claims towards Artsakh. Artsakh has never been part to independent Azerbaijan, and therefore the attempts of its annexation to that particular state framework cannot be justified.

Today free Artsakh is an established democratic society. Our shared motto and commitment of “Leaving no one behind” should be the milestone guiding the work of the United Nations family. It is exactly for that reason, I believe, that people of Artsakh should never be isolated from the implementation of the sustainable development goals.

I strongly believe that the unresolved status of the Nagorno Karabakh conflict should have no impact on the people of Artsakh as they exercise their rights. It is, first and foremost, about inalienable rights for any human being. It is about the right to life, the right to organize public life, the right to form freely one’s own government, the right to communicate unimpededly with the outer world, and many other rights.

Armenia consistently contributes and will contribute to the improvement of the living conditions of the people of Artsakh, its sustainable and democratic development. No one has a right to create hindrances to the implementation of initiatives and projects to that effect. The legal status of Artsakh, or, to be more precise, the lack of the international legal recognition, is not and cannot constitute an obstacle for the women and men who live there to exercise their rights.

We strongly believe that there is no alternative to the peaceful resolution of the Nagorno Karabakh conflict. Right now, from this eminent podium, I reiterate our commitment to that effect.

Meanwhile, everyone should be aware that the Nagorno Karabakh issue is a human rights issue. It can be resolved exclusively through one of the fundamental and inalienable human rights – the people’s right to self-determination.

At the end of the day, whatever option for the conflict resolution we arrive at, the Republic of Artsakh should not enjoy a status and liberty that might be inferior to the one it enjoys today. Azerbaijan shall recognize and respect the right of the people of Artsakh to decide its own future through a free expression of will. All available international and domestic mechanisms should guarantee the security of the Armenian population of Artsakh.

When I last time spoke from this eminent podium and addressed the process of international recognition of the Armenian Genocide, I considered it my duty to express our gratitude one by one to all nations that recognized the horrendous crime that was committed against my people in the Ottoman Empire.

It is my duty to express gratitude from this eminent podium of Honor and Responsibility to all those countries that have recognized or reiterated their position on the Armenian Genocide.

I thank them for it, regardless of the format and language adopted.
I thank the numerous countries and individuals, state bodies, regional entities and organizations, who called things by their proper names. That is, indeed, important since denial paves the way for new crimes of genocide.

In this context, we recall that next year the family of the United Nations will mark the 70th anniversary of the Convention on the Prevention and Punishment of the Crime of Genocide. Armenia will bring up a new initiative upon that occasion, and we invite all to join us and defend that initiative.

We, nevertheless, have never made the recognition of the Armenian Genocide a precondition for the normalization of the bilateral relations between Armenia and Turkey. Moreover, it was upon the initiative of Armenia that a normalization process was launched, resulting in the conclusion of the Zürich protocols in October 2009.
Up to this day, those documents have not been ratified, instead, they have landed in some dark drawers of the official Ankara. The Government of Turkey came up with preposterous preconditions for their ratification that run counter to the letter and spirit of the Protocols. I expressed the clear-cut views of the Armenian people on this issue three years ago, when I spoke from this eminent podium.

Now the time has come for additional explanations. The leadership of Turkey are mistaken if they think that those documents can be held hostage forever and ratified only at the most opportune occasion from their very point of view. The Protocols were negotiated in the existing circumstances in order to find solutions to the actually existing issues.

Armenia will declare those two Protocols null and void since they continuously lacked any positive progress towards their implementation. We will enter the spring of 2018 without those, as our experience has demonstrated, futile Protocols.

Armenia, nevertheless, continues to believe that any two neighboring states need to establish and enjoy normal relations in order to address all possible disagreements between them and find solutions to such a discord.
This is the conviction we are guided by in our engagement with various integration processes. Today, Armenia is an active member of the Eurasian Economic Union and with its active work spares no effort in order to contribute to the unimpeded movement of goods and services in that large economic area and, hence, contribute to and promote welfare for all. We have already registered certain achievements in that regard, and that makes us feel hopeful for future. We also plan to conclude this November Comprehensive and Enhanced Partnership Agreement with European Union, which, in our view, will help us to give a new impetus to the institutional reforms implemented in Armenia.

The current instability in the Middle East regretfully remains as a serious challenge.
It is with great pain that we have been following the crisis in Syria and the humanitarian situation there, which has brought about suffering of the civilian population, including the Armenian community of the country. Within its means, Armenia strives to mitigate the suffering of the Syrian people by providing humanitarian assistance. We also express our willingness to engage into possible discussions on the peacemaking efforts in Syria under the UN auspices and with an appropriate mandate.

I have no doubt that our family of the United Nations is able to guarantee a new quality of cooperation that will allow us to withstand the contemporary global and regional challenges. It is with that objective in mind that Armenia participates in a number of the UN peacekeeping operations. Moreover, we stand ready to increase our contribution in Lebanon and Mali to UNIFIL and MINUSMA missions, respectively.

Armenia, as a landlocked country located in the complicated region, a country with scarce natural resources, has continuously emphasized that human capital is its most valuable resource. It is, indeed, correct both for Armenia and for our whole family of the United Nations: we should focus on people, we should strive for peace and a decent life for all, on a sustainable planet.