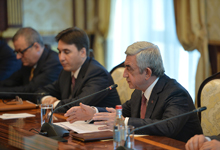 This meeting is somewhat unprecedented. While I regularly meet with the Speaker of the National Assembly, other MPs, I considered it necessary to organize a meeting in this format today.

My vision of the activity of the National Assembly was thoroughly presented in the extensive speech of May 18, and naturally, today I will not repeat the provisions of that message, instead I will focus on other issues of concern to all of us.

We have a unique mission to transform the governance system in Armenia. On April 9, the Republic of Armenia will switch over to the parliamentary system of governance, and I must say that I am satisfied with the works carried out by the National Assembly in that direction. Since May 18, 2007, you have adopted 286 laws, of which 15 are completely new laws.

Of course, these are good and positive trends. Nevertheless, we should not just state the figures and go satisfied. We are committed to maintaining this pace of work to be able to provide the necessary legislative solutions at the right time.

Too much legislative work has to be done in a short period of time, so the effectiveness of the work becomes extremely important. The Judicial Code needs to be updated, new laws should be adopted on the Constitutional Court, the Government, the Security Council, and this transitional period must be completed successfully, with the transition’s smoothness being the main criterion of success.

The nearly eight months of work showed that the National Assembly is essentially the central and fundamental platform of Armenia’s social and political processes. This factor was fully reflected not only at the plenary sessions of the National Assembly, but also in the work of standing committees, as well as during the parliamentary hearings.

An important role is reserved to the new body formed as a result of constitutional amendments - the National Assembly Council. It should develop and strengthen, essentially contributing to the effective organization of your work.

The National Assembly should act as an important platform for dialogue and co-operation between the majority and minority forces. In this regard, some problems nay arise just as in other democracies. At the plenary sessions, not only the opposition, but also the representatives of the ruling party take emotions and intensify the atmosphere, but these are normal issues of democratic development and growth, which, I am convinced, will calm down over time.

Here, I must say that I appreciate the consistency and patience of the President of the National Assembly in the contacts with MPs. In all cases, we must continue to strengthen the atmosphere of tolerance and mutual respect in political discussions. The representatives of the ruling team should be more restrictive, taking into account their status

In the transitional period, our focus should be kept on the population’s daily life and the country’s socio-economic development. A few days ago, I had a consultation on issues of price hike and the mitigation of its consequences. The Parliament must keep its hands on the country’s pulse and this is normal.

The National Assembly has already held some remarkable hearings and, maybe, it is also worthwhile to organize such hearings so that the issue will be thoroughly publicized and people will see the realities. You can see for yourself its expediency, but I think it can be useful.

I hope that the activities of parliamentary diplomacy will not suffer during this period, whether they within multilateral structures or bilateral cooperation. Of course, we will still have occasions to address this question in detail.

If you want to address these issues today, we can do so, if not, we will take them up during future discussions. At the end of the year - in the month of December - the third global forum “Against the Crime of Genocide” will be held, in the organization and conduct of which the National Assembly, according to tradition, has to make its unique contribution.

The Republic of Armenia is entering a serious political cycle. Before this March 9, the National Assembly will have to elect the fourth President of the Republic of Armenia. I hope that all National Assembly members will approach as responsibly as possible this election under the new constitutional procedure. And, of course, it is desirable that the President of the Republic be elected amid a broad parliamentary agreement.

Before March 9 of this year, the National Assembly should also elect the members of the Supreme Court Council. It is difficult to overestimate the importance of this public entity, taking into account the powers vested in it in terms of guaranteeing the independence of judges and courts.

This body will be reserved a crucial role in the future of our country. In the upcoming months it will also be necessary to fill vacancies in the Constitutional Court. The National Assembly should also appoint members to the newly formed autonomous entity - the Corruption Prevention Commission.

There is no need to explain how important it is to combat this evil for the future of our country and economy. And, of course, after April 9, the National Assembly should elect the Prime Minister of the Republic of Armenia.

I mentioned some of the guidelines on our roadmap to the new system of governance. Today, perhaps, it is worth focusing and touching on the developments that will take place right up to mid-March or early April. I expect you to be active and free during this discussion.

This year we will celebrate the 100th anniversary of the restoration of Armenia’s independent statehood. We are responsible not only for the contemporaries, but also for respecting the memory of all heroes of Armenia’s millennia-long history and the May war. I am convinced that the understanding of this commitment will accompany us in the coming months.

Thank you for your attention, and let us now get down to discussion.