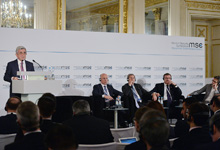 At the outset, I would like to thank Mr. Ischinger for the invitation to this Conference. I greet all the participants of this panel. Events like this one contribute to and enrich the open and informal exchange of views and approaches.

They say geography is destiny; I, however, think that it is also biography. We know it well from our own experience. As a result of our journey, we have concluded that geopolitical competition bears nothing good. Therefore, the ability not to suffer from such competition is tantamount to benefiting from it. This experience of history is what drives our current policy.

Furthermore, I strongly believe that for Armenia and many other nations, being at the intersection of interests of the greater geopolitical powers is both a challenge and an opportunity.

When these powers collide, the interests of small nations sometimes get overlooked. Therefore, it is our objective to incessantly transform this challenge into an opportunity—through cooperation and combining of various interests.

The Helsinki Process commenced in the course of the 1970s. It was aimed at consolidating security and cooperation in Europe. I believe that the solidarity and coexistence of nations in dignity and equality have been the promises that remain topical today.

The commitments undertaken in the framework of the Organization for Security and Cooperation in Europe should indeed dwell from Vancouver to Vladivostok. The ten principles of the Helsinki Final Act are an integral whole. None of them should be disjointed from or contrasted to the others.

The same can be said about all the other commitments negotiated in the framework of the Organization for Security and Cooperation in Europe. Equal rights and the cooperative approach should dominate across the OSCE region. It is the only path towards consolidating the concept of comprehensive and indivisible security endorsed in Helsinki.

Azerbaijan’s position regarding the Nagorno Karabakh issue is a flagrant violation of the Helsinki spirit. It is particularly evident in the recently-launched election campaign. President Aliyev uttered territorial claims reaching as far as Yerevan, the capital of Armenia, calling it a historically Azerbaijani territory - nothing but delirium - which can have serious consequences if Europe turns a blind eye to it.

The Nagorno Karabakh issue must be resolved as soon as possible, and by peaceful means. This mission of ours is led by the Co-Chairs of the OSCE Minsk Group, namely the Russian Federation, France, and the United States of America.

The three principles of international law – non-use of force or threat to use force, peoples’ equality and right to self-determination, and territorial integrity – have been proposed by them as the cornerstones of the peace process. The European Union in turn has reiterated on numerous occasions that it supports the efforts and proposals of the Co-Chairs.
The efforts to resolve the Nagorno Karabakh issue can serve as an example of how Russia, the EU, and the US can positively coordinate their positions for the benefit of international peace and security. We desire to see more frequent manifestations of such common positions.

It is especially important, since conflicts in all corners of the world are increasing and expanding. We are concerned by the sweeping changes taking place in the Middle East and elsewhere, which are accompanied by neverending wars. We are concerned by the state failure and disintegration of a number of countries. We need to think of cooperative, comprehensive, and indivisible security, so as to effectively respond to those challenges. This is the only possible and realistic way to overcome the current crises.

Armenia has always been open for cooperation, and has respected the interests of others and done her best to match them. We have always attempted not to impose upon our partners a choice, and whenever possible, to build an environment of positive cooperation. I can say that all of our partners have by and large supported this policy of ours and the steps taken as a result of it.

Armenia acceded to the Eurasian Economic Union with a clear understanding that doing so would best serve the development of our economy and the future of our nation. The results achieved since our accession do prove our trust in the path we embarked upon. Meanwhile, it has in no shape or way impeded our cooperation with the European Union, especially in the areas of institutional reforms and modernization.

Our cooperation with the European Union has been elevated to a new level by the recently concluded Comprehensive and Enhanced Partnership Agreement. It is now important for the ratification of this document to proceed at due speed.

Modernization is a constant process, which makes us keep pace with the times. We shall always strive to cooperate with all those powers that boast great achievements and can contribute to the modernization of my country. The above policy facilitates Armenia’s cooperation with both the Eurasian Economic Union and the European Union. It also unleashes opportunities for everyone who is interested in the development of entrepreneurial ties with these two integration structures.

We have been negotiating with all the interested countries with the objective of creating a new transit corridor between the Black Sea and the Persian Gulf. We hope that their successful conclusion will render a list of beneficiaries that will be far more extensive than the countries engaged in the negotiations process. In my view, collaboration of the member States of the EU and EAEU in both bilateral and multilateral settings is consistent with our shared interests and will contribute to our economic advancement.

Here, I would like to draw your attention to one more important feature. Our society has achieved broad consensus on the matters of Armenia’s foreign policy and the steps undertaken for Armenia’s economic integration.

At the times of the Cold War, Armenia was on the border of one of the two rival blocks. Thirty years have passed since the fall of the Berlin wall, but Turkey still continues to keep the border with Armenia closed. It seems that the clock stopped ticking there.

I am convinced that Armenia has taken all the possible measures in order to overcome that impasse. I initiated a process of normalization of the relations between Armenia and Turkey, which could have created new opportunities for both of our nations and the region at large.

Nevertheless, the Protocols that Armenia and Turkey had signed back in 2009 remained on the paper. Turkey not only failed to ratify these documents, but also came up with preconditions that had no connection whatsoever with the Protocols. It was nothing but a failure to take advantage of the historic opportunity.

Is Azerbaijan preventing Turkey from establishing relations with Armenia, as many are trying to convince us? No, it is not the case. The chief impediment is the lack of political will on the part of the Turkish leadership.
I believe you may be aware that many representatives of the Armenian diaspora were not too happy about that decision of ours. It was natural, as they were successors of survivors of the Genocide and of homeland dispossession. I travelled around the globe back then, met with our brothers and sisters in the Diaspora, community after community, and discussed with them this very sensitive issue.

Have the Turkish leaders displayed such political will? Have they been faithful to the commitments they had signed up to?

We cannot wait eternally for Turkey's response. The Protocols were negotiated under the existing circumstances. If Turkey desires to await other circumstances and only then to ratify the Protocols, then it is profoundly mistaken. Under potential new circumstances, a new document is to be negotiated. Armenia does not resort to the language of preconditions, but equally, Armenia shall never accept preconditions put forth by anyone.

A brilliant son and statesman of the French nation, Charles de Gaulle, outlined a vision of united Europe from the Atlantic to the Urals. I think that it is the most accurate response to the question put forth for the discussion by this panel.

I strongly believe that the fruits of mutually-beneficial and inclusive cooperation will best serve to bringing the European nations together and to ensuring their prosperity. This is the position adopted by Armenia, and we stand ready to further contribute to the realization of that objective.