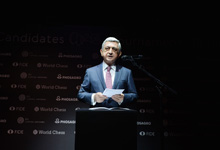 Today a great event is taking place in the world of chess: the long-awaited Candidates Tournament kicks off.

I think this is a special milestone for the chess giants present here who will start competing in a couple of hours for the right to challenge World Champion Magnus Carlsen.

I am also proud and grateful to the organizers for the opportunity to make the Tournament’s first symbolic move in acknowledgement of our country’s contribution to the development and socialization of chess.

Though Armenia is not one of the world’s largest countries for its small size and population, many consider it a chess superpower, since the modest Armenian national team, which features current contender Levon Aronian, has triumphed three times in the last few years and once won the title of world champion.

Chess is a unique game that has stood the time trial. It is quite similar to life, where the final result is largely dependent upon the steps taken, and after the end of the game, all the players, whether a king or an ordinary soldier, are placed in the same box. Perhaps, this is the reason why for many centuries humanity has been fond of and played chess in quest of its still unknown, hidden aspects, trying to uncover the endless secrets and depth of this delicate game.

Chess is a game, but it is also art and science. It teaches a person the culture of thought and accuracy, creativity and honesty. It imposes deep respect with regard to the opponent.

Realizing the positive impact of chess on children’s commitment, flexibility, brainstorming, and other qualities, Armenia became the world’s first nation to include it in the schooling program. I can state with great pleasure that our society welcomed the idea with great enthusiasm, and there are already some positive results. Indeed, we are happy to see that the Chess in Schools program is being introduced in other countries as well.

This year the world’s first chess research institute was inaugurated in Armenia. We hope that the Institute’s activities will help reveal the undiscovered aspects of the game of chess.

The International Chess Federation, which today unites 189 countries, is the most important chess authority which has great responsibility in the development and dissemination of chess.

I would like to thank FIDE for continued and fruitful cooperation with the Armenian Chess Federation and wish them ever new achievements. Taking the opportunity, I also express my gratitude to the Berlin City Hall and the Organizers for offering us this nice chess holiday day. The high-level organization of the Tournaments will be a great investment and a stimulus for the development of chess around the world.

This tournament is unique in nature. The best of the best are challenging the title. Here, the difference between the first and the second places is enormous as the winner will continue his struggle for the Chess Crown. However, participation in the Tournament is a great honor for every chess player and speaks of their great mastership.

For many players, it is a dream and purpose of life to join the elite of eight selected chess masters. Each of you has earned this right in the wake of a protracted and stubborn struggle phased over several hard stages.

I am confident that the competition will be tense but exciting, and we will witness many beautiful and meaningful games.

As I am hosted in the homeland of the world-renowned chess player, second world champion Emmanuel Lasker, who held the chess throne for 27 years, I would like to wrap up my speech with his advice: “If you see a good move, look for the better.”

I wish all Candidates good luck. Let the strongest win.