Statement of the President of Armenia Armen Sarkissian 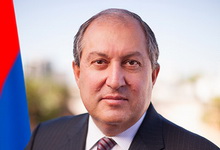 The ongoing developments in our country have come to a dangerous point and could result in unpredictable consequences.

Regrettably, contrary to a previously reached agreement, the negotiations were interrupted when in fact they could have led to de-escalation and reduction of tension.

Nevertheless, the destructive stance and attitude must be abandoned since they might undermine the stability of the country; it is necessary to continue to look for opportunities to maintain dialogue.

Thus, I appeal to our all our citizens, our compatriots in Diaspora to refrain from the attempts to aggravate the situation and to show restraint.

Security of Armenia and Artsakh must not be jeopardized.

On the eve of April 24, the society should not be divided. On that day, we as a nation, in Armenia and in Spyurk, should come before the entire world as the utmost composed, commemorating in unison and togetherness the memory of our blessed martyrs.