Address by the President of Armenia Armen Sarkissian 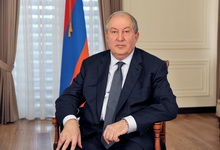 This is a crucial moment.

As you know, hours ago the Prime Minister of the Republic of Armenia has resigned. Several weeks before that a civil movement was initiated. The movement had very rapidly become a political movement, I would like to note with satisfaction that the leaders and the absolute majority of the participants of the movement adopted and have been led by a very important principle, i.e. to conduct meetings and demonstration in a peaceful manner.

This is not only smart tactics but also a matter of principle because for our nation, our people, no matter how grave difficulties and problems are, confrontation or counteractions are unacceptable.

Of course, we all know, and have spoken on this many times, there are multiple problems in the country. Problems, which are of a social nature, problems, which are related to intolerance, and corruption. Through the years, a feeling of dissatisfaction has been accumulating within our society. In the course of years, the people and particularly young people, lost a precise vision regarding their future, lost hope and faith. It might seem that these are not material factors, are not directly related to the economic growth and indicators however all of us in our personal lives have felt that pressure on a daily basis.

The accumulated discontent, lack of trust regarding the future gave birth to a civil movement.

As you know, in the morning I have invited the political leadership of the Republic, the President of Artsakh and Catholicos to discuss the present political situation, mindful also of tomorrow. Tomorrow is April 24 – the day of our national mourning, national unity and struggle. And certainly, it would be unacceptable if on the day of our unity and national grief yet one drop of Armenian blood was shed. This has been the topic and aim of our today’s meeting.

At the meeting there was formed an appeal to the citizens of Armenia, Artsakh and our entire Spyurk, the main points of which you know.

The events, which have taken place, came to prove once again that our state, the Armenian people are not limited to one republic only. Issues, which worry and move the citizens of Armenia to undertake civil activities, concern not only the citizens of Armenia but also our compatriots in Artsakh and, of course, Armenians in Diaspora. We are a small country but a global nation. And as we have seen, not only in Yerevan, in Armenia but also our compatriots in Artsakh and in Spyurk every moment, every minute think of Armenia’s problems and pain, think of ways and means to solve them.
I would like to once again refer to the meeting which took place in the morning. Right after the meeting, Vice Prime Minister Karen Karapetian visited the member of the National Assembly Nicol Pashinian. There took place a conversation after which Nicol Pashinian and his MP colleagues were set free. A couple of hours later, the Prime Minister resigned.

I would like to give my assessment to the wise decision of Prime Minister Serzh Sargsyan: With that decision he not only ruled out any possibility of confrontation, disorder or riots, which could have had unpredictable consequences, but also opened the door for a dialogue with the society, between different political forces. He opened the door for this crisis to have a positive outcome, so that the accumulated energy, vigor, which has manifested itself in demonstration, tomorrow or day after that become vital, creative work.

Our people possess immense potential; the question is whether we will be able all together, from president to a common construction worker, call that vigor and potential to life.

I have said on many occasion that many of my partners, intellectuals, entrepreneurs here and in Diaspora have been noting the huge potential that our nation has. The time has come for that potential to be released.

We can become an example for multiple nations, peoples, and states because we are able to solve our internal, domestic problems through a normal dialogue, respecting each other. This is a historic moment indeed. We should be able to assess our past victories, success, as well as to scrutinize the entire course of the last 26 years, should be able to assess where and when mistakes were made.

And of course, at this moment, relying on wisdom, willingness and patriotism of all political forces, we will create a new Armenia, will create a new vision, bringing the whole nation to the task of building Fatherland, engaging them in Fatherland’s success and future victories. Not a single Armenia will be left out of this process; everyone will chip in his or her share and feel that he or she too has responsibility as part of our great nation who should contribute to our future success.

Will we be able to build an Armenia where the border troops can be certain that in their homes, villages, towns, in their Fatherland everything is fine, and the country is moving forward?

Will we be able to build an Armenia where every citizen has a job which will provide for decent living of his or her family?

Will we be able to build an Armenia where students will first and foremost be citizens but at the same time, and this is very important, be good students, eager for knowledge and confident that their future is tied to that of Fatherland – Armenia?

Will we be able to build an Armenia where emigration is non-existent. Moreover, where our compatriots, realizing that Armenia has taken the right course, will return to their ancestors’ home?

I know this is our common dream and I believe that together we are able to make it come true.