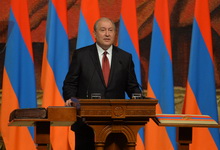 I congratulate us all on the occasion of Victory and Peace Day and Deliberation of Shushi.
At this moment, my thoughts are with veterans of the World War II, those, who to our delight, today are with us. I wish them excellent health and a long life.
They passed to us the fighting spirit and joy of victory.

My thoughts are also with them – our parents and grandparents, who shouldered difficulties and burden of the war: the blockade, hunger, captivity, concentration camps and GULAG, orphanhood, and destitution. They taught us to endure, to hope, and to survive.

I bow to the memory of thousand heroes who sacrificed their lives for freedom. The nation, which was still bleeding after the Genocide, paid a huge price in the fight against fascism and sons of our nation covered themselves with glory at all fronts.

Their example was instructive for multiple generations. Decades later, descendants of those heroes raised to fight for freedom and deliberated Shushi, creating new victories.
The spirit of valor, heroism, and sacrifice for Fatherland today are deeply rooted in the Armenian soldiers – defenders of Fatherland. They, victorious soldiers in April 2016 through the unthinkable acts of heroism defended our Homeland.

Today our bright young people keep watch, with a creative spirit, commitment and patriotism they have taken up the task of rebuilding our Fatherland.

Long live all men of courage and eternal memory to those who fell for Fatherland.