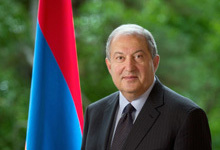 Today is Constitution Day. Also, today we are celebrating State Symbols Day which makes it a double holiday and makes today’s message even more meaningful. State symbols are absolute values and realization of their significance and due appreciation are important for the country’s today and tomorrow. Constitution is perceived as the symbol of the supremacy of law.

However, the greatest symbol of any state is its law-abiding citizens who at the same time are protected by the law. Constitution is the ultimate document which, as the guarantee of our independence and future advancement, secures the rule of law, justice and the system of values in our country which is based on the power of the people.

The recent steps taken towards state building are also based on the logic of the land’s Ultimate Law. On this Constitution Day, we should not only proudly note the indisputable fact of existence of the sovereign Republic of Armenia but also our country’s unique and high repute at the international arena.

To elevate that repute even higher is everyone’s right and responsibility but also our moral obligation before Fatherland.

Constitutional values will become a reality when each and every one of us becomes the bearer of those values. Constitution defines legal boundaries for rights and responsibilities. It distinguishes right from wrong; it defines the legal field which covers also our moral laws.

The Constitution and the people’s will are intertwined. Today the people are masters of their lives, of the country’s development agenda. That agenda should not be dominated by emotions but rather be called to life based on respect for the Constitution as the guarantee of the free, democratic and powerful Armenia. We will continue to work together to build a politically and economically congruous Armenia, an Armenia which is advancing centered on the mutual respect of the citizens and authorities.

Exercising their constitutional rights, the citizens of Armenia have chosen that very path, the path which is supported by freedom, solidarity, tolerance and, certainly, the Constitution.

To live in the Armenia of law and dignity should not be a dream but a reality. To live by laws is not just a need and responsibility but the privilege of free people who know well the value of theirs and others rights.

I congratulate all citizens of the Republic of Armenia. I wish you all peace, optimism, and prosperity