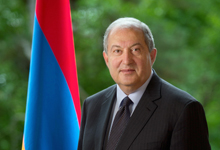 The Public Relations Department of the Presidential Administration informs:
President Sarkissian, who is in the United States at a working visit, is following carefully all the events going on in Armenia.

The President of Armenia has spoken on phone with Prime Minister Nicol Pashinian and Speaker of the National Assembly Ara Babloyan and discussed with them the existing situation.

The President will refer to the draft law on the Amendment to the RA Constitutional Law on the Statute of the National Assembly immediately after his return to Yerevan and will initiate consultations with the leadership of the Government and National Assembly.

The President urges to remain calm and tolerant towards each other and is confident that the existing situation can and must be settled in the framework of the Constitution and laws through negotiations and dialogue.

From the United States, the President will depart to Paris to participate at the morning ceremony and funeral of the world famous chansonnier Charles Aznavour.