President Armen Sarkissian’s speech at the event dedicated to the 60th birth anniversary of Vazgan Sargsyan: He knew the power of his cross and always used it for the benefit of his country and his people 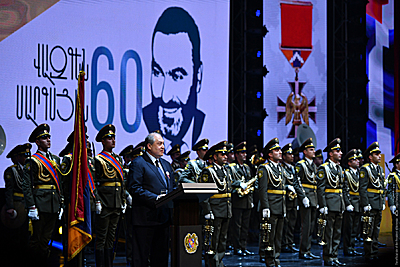 Distinguished Speaker of the National Assembly,

Dear Aram Sargsyan, I know that today Aram is in Artsakh and together with the heroic people of Artsakh is celebrating the jubilee of Vazgen Sargsyan.

Family, friends, and comrades in arms of Vazgen Sargsyan,

Today, we all together are celebrating the 60th birth anniversary of Armenia’s National Hero, Artsakh’s Hero, Sparapet Vazgen Sargsyan.

Services of Vazgen Sargsyan directed at the restructuring and maturation of the Armenian Army are invaluable.

He made a huge and extraordinary contribution to our victories, to the defense and security of Armenia and Artsakh.

The role of the outstanding state figure, Minister of Defense, State Minister, Prime Minister Vazgen Sargsyan in the strengthening of our statehood and the country’s development is huge.

There are many monuments dedicated to the memory of Vazgen Sargsyan, but the best of them was created by himself, Vazgen. It is our victorious Army.
Long live the victorious Armenian Army!

Today, our sacred duty is to safeguard peace, further strengthen our Armed Forces, take care of our Army, troops and officers, Artsakh freedom fighters, homeland defenders, and their families.

Vazgen lived and acted for the Fatherland, as a dedicated person, a worthy son of his nation, a soldier, an intellectual, author, public speaker, a statesman.

As a man and as a statesman, Vazgen truly was unique and special with his way of thinking, way of acting, his character and feelings. He was the embodiment of a strong, powerful, resolute, and tough man.

Fatherland was deeply enrooted in Vazgen. Everything was viewed through the prism of the Homeland’s interest, from his personal life to the most difficult state tasks. Vazgen never preached patriotism: He was a model of a patriot in his life and in his deeds.

It is no accident that he gathered around himself patriots just like him – his comrades in arms.

Vazgen was also an open book whose pages were as simple as sophisticated, and there was more among the lines than met the eye.

It is true that Vazgen was an open book: In his every word and deed was as much simplicity as there was passion, romanticism, as much determination, even toughness as much love, care, and sentimentalism.

Yes, Vazgen was an open book just because he was Vazgen with all this human personality, known and unknown, comprehensible and suddenly incomprehensible, predictable and sometimes unpredictable.

He knew the power of his cross and carried it willfully because it was also the Fatherland’s cross.

He knew the power of his cross and always used it for the benefit of the country and the people.

You all, we all are indivisible parts of this country, regardless of where we live, no matter if we hold arms or hammers, or spades, or pens. This is our common country, with its old and new borders, living with the memories of the past, going through the present-day life, and guided by the future.

It is also Vazgen Sargsyan’s country of which he said, “This is not a country to be loved through words, not to be observed through a binocular, there is a stone behind every stone, fog behind fog. Borders of this country are drawn by blood and are enforced by sweat.”

Indeed, our borders are drawn by blood. Now our task is to strengthen and defend these borders with sweat and toil.

Just like many of you, I was not only Vazgen’s friend and pal but in a certain sense also his comrade in arms and adherent. We both were confident that the 21st century would be our age.

Today, I want to assure you, also on behalf of Vazgen, that the 21st century will unquestionably be our age. I recall warmly, often also with longing, our meetings and conversations with Vazgen. And each time, I see in front of me his stout and bright image, generous soul, brave, often audacious nature, mischievous eyes, open smile, and, of course, jolly, incomparable, voiced laughter…

I am sure you know that as a nation and as people, we are moving resolutely through the time. And that time carries your strong image, your lasting footprint, your name.
I am sure you know that success will not leave us if we feel the pulse of the time, if we constantly think and act keeping in mind that nobody can love our own country stronger and more sincerely than we do. Love like you did, Vazgen Sargsyan…

Times will pass, and coming generations will appreciate fully, deeper your substantial weight and role in Army and State building, in the modern Armenian history. But today, on your birth anniversary, I would like to thank your parents, Mother Greta and Father Zaven, and bow to them.

I bow to the memory of the heros of Artsakh Liberation War and those who created our victories.

Those who sacrificed their lives for the glory of the Fatherland, from day one of the liberation war to April War, and today.

I bow to the memory of all participants of the liberation war, to your comrades in arms, to all our troops of yesterday and today.

I bow to our nation.

Long live the Republic of Artsakh.

Long live the Republic of Armenia and Armenian people all over the world.