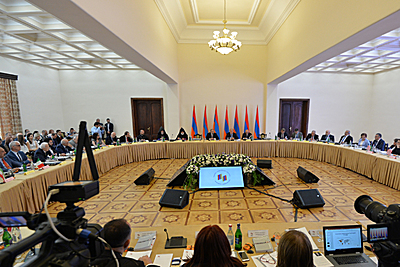 Distinguished President of the Republic of Artsakh,

Honorable members of the Board of Trustees and representatives of local bodies,

First, I am glad to have this regular meeting with you which provides the opportunity to gather in Fatherland and discuss pan-national issues.

Welcome, all our compatriots from Spyurk.

I thank you all for the works accomplished in the course of the last year. As you know, last year was not easy for the Hayastan All-Armenian Fund. We were able to overcome with honor a disturbing situation which existed at beginning of the last year and to reestablish the good name and authority of the Fund.

With this regard, I would like to express special thanks to the President of the Armenian Fund Chapter of France Petros Terzian and to the staff of the Fund, led by the newly elected Chairman, as well as to all those who acted properly and appropriately at their places to amend the situation.

For over 25 years, the Hayastan All-Armenian Fund has been carrying out its pan-national mission as a unique structure which unites Armenia, Artsakh, and Spyurk.

Today, it is the most important donor for Artsakh’s development and should continue to remain such in the future. In the course of year 2018, the Fund implemented almost 100 programs in different areas and of different scope; some of them are still in process.

The Executive Director of the Fund in his statement will certainly speak in detail about the works accomplished last year and about the future undertakings. As the Chairman of the Board of Trustees, I was regularly informed on all that. However, the Fund needs to become a more dynamic, more mobile, more flexible and a more powerful structure. It implies the ability to change, first and foremost in our mentality, minds, work style, structure, programs, Charter, even in the membership of the Board of Trustees. No need to be afraid of changes, especially when the world is changing so rapidly. The Fund should not be perceived as an office which deals exclusively with building roads or irrigation networks.

The Hayastan All-Armenian Fund should be accepted, perceived and established first of all as an institution of pan-national trust which lives not by the past but by the future. It means that while appreciating works carried out in the past, we need to think in present tense about our future and move towards the future. Any change related to the Fund’s activities – from legal to moral – should have a clear-cut message. And the message is the following: The Hayastan All-Armenian Fund should be above suspicions, allegations, misconceptions, a structure which lives by the “Armenia, Artsakh, Spyurk” and “Armenian nation” concepts.

As you remember, in May, 2018 I said at the session of the Board of Trustees that after more than twenty years after the Fund’s creation, it would be necessary to review the past accomplishments, assess success and failures. It means that there is a need for a new vision and a new program of action.

I said it before, I say it now: The Fund created in the 20th century has registered great success. The time has come for it to become a national institution of the 21st century.

After the dramatic changes, which took place in the Fund’s life last year and which we all have our assessment of, I would like to state with satisfaction that as a result of the activities of the new leadership of the Fund, the number of supporters of the 2018 telemarathon increased by nearly 20 percent, while the donations continued to arrive after the telemarathon even today.

The new structure of the Hayastan Fund, which was approved at the previous session of the Board of Trustees, has been improved. It is aimed at making the activities of the Fund and relations with the foreign partners more flexible. The process should be of a continuous nature.

The Fund should not be perceived as a fundraising establishment and Fund’s structures in Spyurk should not function as treasury offices. It is high time the Hayastan All-Armenian Fund also assumes the mission of strengthening and solidifying the all-Armenian network.

After all, we have a problem of preserving all that is Armenian – Armenian language, identity, history, and the system of values. In times of globalization this problem becomes even more acute. Having in mind the wide geography of the structure, the Fund could also implement relevant programs and strengthen Armenian communities and Armenian values. These communities are the most vital links of the beneficiary-donor-supporter chain. This could become one of strategic goals of the Fund.

I hope that the Hayastan All-Armenian Fund will continue its dedicated work with new programs, in new directions.

I wish us all productive work and constructive discussions.