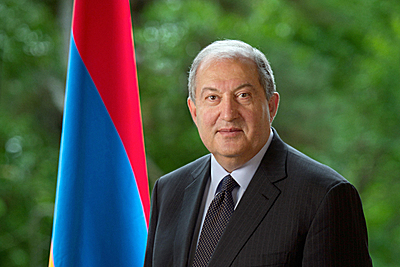 I convey my congratulations on the occasion of the Army Day, wishing us all peace and new victories.

The Armenian Army was born and formed in modern times, in the heroic battles of our fight for freedom. It restated the glory and repute which the Armenian military always had starting from Imperial times to Sardarapat and the World War II, in which courageous sons of our nation, from marshals, generals to soldiers wrote their names in gold on the pages of the history of the Great Victory.

This year celebrates the 75th anniversary of that victory, a victory to which our ancestors made a great contribution, a victory for which more than 300,000 of our nation’s sons and daugthers sacrificed their lives.

I bow to the memory of all our predecessors who fell in the World War II and send my gratitude to the veterans who not only keep bright the memories of the victory but also through their experience and biographies serve a living example for us all.

Today, their generations stand on our border, those who carry on with their victories, those who will pass military traditions to next generations.

The Armenian Army of today is a living embodiment of the national unity and togetherness. It is a strong pivot of our pride and national dignity which forms and educates responsible and patriotic citizens.

The Army is dear to us all, and we all are precious to our Army.

The Army is our family because this or that way, directly or indirectly, we all are connected to the Army.

The Army is a source of our pride, is one of our greatest assets.

The Army is our forefront. And it is thanks to our Army that we hold our heads high, we look with pride, dignity, freely and confidently at our close and distant neighbors, at our friends and foes, look in the eyes of those who know us and those who don’t.

In all times, Fatherland, Honor and Dedication to the Army has been the password for our voluneteers, troops, and officers. This password brought us victories, this password defended our families, liberated our land and today too, this password protects our Fatherland, peace and security of Armenia and Artsakh.

In modern time, the Army is also a promoter for the development of the economy, science, and professional skills. Modern army means new mentality, new skills, a better education and science, new technologies, modern industry, including military, modern agriculture, food security, in one word - a new economy.

There is no doubt that the weaponry, constantly acquired by the state, solidifies the technical base of our Army. However, without human capital that base will not be strong enough. Through the effrots of us all, we need to enforce physcologically, physically, and to augment materially that capital and raise it to a qualitatively new level.

Every single day the Armenian Army gives us the most precious thing – peace and security.

On January 28, just like on any other day, let’s us pray for our troops,

For you, distinguished soldiers, freedom fighters, officers, and generals,

For you, dear parents of servicemen, for your, distinguished parents and relatives of our beloved heroes,

Think and act for our country, our state, our nation, for our today and tomorrow.