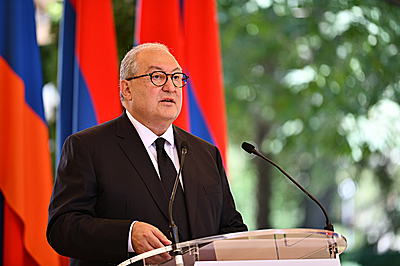 Dear Speaker of the National Assembly,

Dear members of the Security Council, the National Assembly, and the Government,

First of all, let me congratulate you all on Armenia's Independence Day,

and to you, dear award-receivers, also my congratulations for receiving your awards and titles.

As the number of the awarded is quite large, part of them will receive the awards, again in solemn conditions, in the coming days.

At the same time, I would like to note that, unfortunately, not all the worthy have been appreciated for their services to the Homeland. But, the USSR Marshal Hovhannes Baghramyan, Hero of the Soviet Union awarded twice, used to say, "One ought not be offended by the Homeland." Hardly living in Armenia during his bright military life, Hovhannes Baghramyan knew well the value of the Homeland and the need for statehood. He knew that as far back as the Battle of Sardarapat, in which he participated with devotion. Unfortunately, Baghramyan did not see the independence of the Homeland.

Today, on the 30th anniversary of proclaiming the independence of the Republic of Armenia, the presence of the Armenian army and soldiers in this ceremony is significant. In a few days, it is the first anniversary of the second Artsakh war.

Family members of the posthumously awarded are present here today.

I bow to the memory of your sons, husbands, relatives and to all of you ...

I propose to honour the memory of our compatriots with a minute of silence, who sacrificed their lives for Armenia and Artsakh in this war and at all times…

Independence was achieved through the collective efforts of our people, owing to the devotion and unity of all of us; because the idea of having a free, independent Homeland prevailed.

Independent Armenia is thirty years old. Each of the past 30 years has been a unique year of trial. The last year has been the hardest with its consequences, problems, losses, and wounds. One year after the war, in addition to the victims and the wounded, we still have people in captivity and missing, border matters and many other unresolved issues.

During these thirty years, we learned to win, seek and gain great victories. However, 30 years later, we see that over the years, along with a lot of success, mistakes have been made. We must find the strength to overcome their consequences.

Time offers many opportunities. We must be able to effectively manage that time, our time.

You are those people who can manage time properly, put it at the service of the Homeland and the nation, create and be creative, work and serve, defend borders, our national identity and values, and at the same time, be the bearers of those values.

Statehood is the most significant value. We must never stop thinking about independence and statehood.

The beginnings of statehood are in unity, solidarity, and national accord. Even when the latter is fragile, it may become the key to success.

Once again, I congratulate all of us on Armenia's Independence Day.

God bless our people in Armenia, Artsakh and the Diaspora.