Future developments should be based on human values: the Second Armenian Summit of Minds was held in Yerevan with the participation of President Armen Sarkissian and world-famous figures 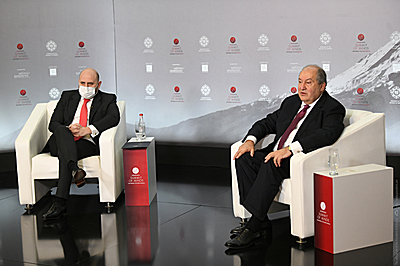 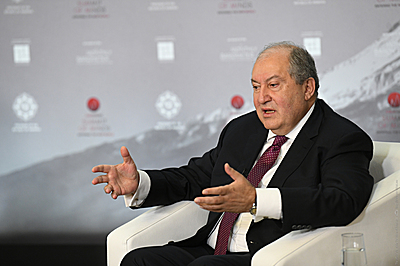 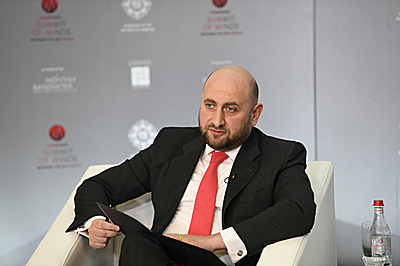 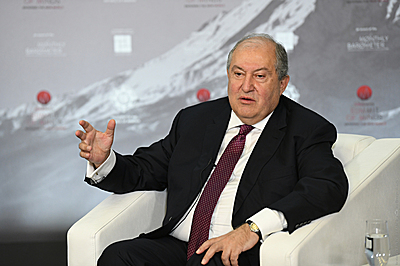 The Second Armenian Summit of Minds opened today in Yerevan under the auspices of President Armen Sarkissian.

The Summit in Yerevan discussed issues related to the geopolitical and regional challenges, including the latest developments in the Nagorno Karabakh conflict, and in that context issues related to food security, education, healthcare and especially COVID-19.

Welcoming participants from different countries, the President of Armenia noted that despite the ongoing events, it was decided to hold this international gathering, with a change in its format and agenda. “It will certainly be difficult in a short period of time, just one day, to hold discussions and answer all questions. However, one thing is clear: we need to talk of the main issue: the world has changed. This is a new world and our Summit carries that title. At the beginning, we were thinking about making the Summit about artificial intelligence and geopolitics, but the developments compelled us to dedicate it to understanding the new world,” the President said and added. “Our today’s discussions will have two main topics. One is C-19, coronavirus. But we need to talk also about C-20 which is the Caucaus-20, things that are happening now between Nagorno Karabakh – Republic of Artsakh and Azerbaijan, with the involvement of Turkey.”

The organizers and participants of the Summit spoke of the Azerbaijani aggression against Artsakh in the context of global challenges.

The organizer of the Summit, founder of The Monthly Barometer Thierry Malleret in his remarks noted in particular, “Today we have gathered in Yerevan at a very difficult time for Armenia which is conditioned by the coronavirus, as anywhere in the world, and by the war in the region. In 2018, in Chamonix, Mr. President, you said that we were entering a quantum world. Coronavirus, events in Armenia make it clear what we live indeed in a quantum, unpredictable, and uncertain world.”

In his video presentation addressed to the participants of the Summit, former Prime Minister of France Dominique de Villepin underscored that the world was going through a difficult stage which commands building global solidarity. “We see that tensions rise at all levels, we see rising nationalism, starting from the situation in your region, which worsened because of Azerbaijan and Turkey’s ambitions, and which have chosen the logic of force and confrontation. I want to convey my sincere friendship to your people, and President Macron assured and expressed the readiness of the European countries to promote a peaceful resolution,” Dominique de Villepin said. “We are living in times of pain, fear, and hardship. Only together and united we will be able to address the global and unprecedented problems of our world. It is time to have a coordinated vision and initiatives.

Alexey Kudrin, Chairman of the Accounts Chamber of the Russian Federation, in his video address noted that the Summit was taking place in the unconventional situation. “Knowing what kind of tragedy is happening right now in the South Caucasus, I want to express hope that it will be resolved peacefully as soon as possible. Now it is important more than ever to remain committed to a dialogue and respect human life, regardless of age, sex, and nationality. Any use of force is particularly unacceptable under the coronavirus pandemic. This is a new challenge to the entire world.”

One of the co-organizers of the Second Armenian Summit of Minds is the Central Bank of Armenia. Its Chairman, Martin Galystian expressed hope that next year it would be possible to host the participants in Dilijan, like previous year. “Our meeting is taking place in difficult time. The world is fighting a global pandemic which has already claimed more than one million human lives, and a solution has not been found yet. Armenia too, is facing difficult times. As the title of the Summit says, we are entering a new world, a world in which crises have become common. Sources of changes can be very different, from geopolitics to technologies, healthcare, education, etc. We have to use good times to get ready for bad times.”

During the Summit discussions on “Entering a New World”, which were moderated by the former chief correspondent of CNN Riz Khan, President Armen Sarkissian spoke of the challenges in the changing world.

“I would like to focus on two things: one of them is C-19, coronavirus. The world is changing and the coronavirus reminds that it is necessary to pay attention not only to healthcare but to all aspects of our life,” the President said. “Even C-20, which as I mentioned is Caucasus-20, is in a sense a consequence of the changing world. Today it’s a fact that even though there was the internationally accepted format for negotiations, the Minks Group, the Azeri side, which was not happy with the negotiations, decided to start a war. Turkey got involved on the side of Azerbaijan, in different forms, including the presence of military force, military aircrafts, drones, consultants, officers and even the dispatch to the region of Islamist terrorists.

The conflict, which was small and more or less manageable, could have been resolved through negotiations under the auspices of the three co-chairs of the OSCE Minsk Group. But now it has potential of becoming a larger-scale conflict, turning this region into a Syria which will, however, be ten-times worse than Syrian and will harm everyone. This is a new world which is also new from the viewpoint of being destructive. C-20 is a proof of that.”

Mr. Mikhail Shvydkoy, Special Representative of the President of the Russian Federation for International Cooperation in his remarks also spoke about the situation in the region and welcoming the agreement of the temporary humanitarian ceasefire, said in particular, “I want just one thing: that peace reigns in this beautiful part of the world. We will take care of the rest step by step.”

President Sarkissian hailed once again the role of Russia in supporting the establishment of the ceasefire and said in particular, “During the two weeks of heavy fights in the Republic of Artsakh, the people of Artsakh proved that they are invincible fighting against Azerbaijan, Turkey and Islamist terrorist groups brought to this region. There is no other solution than return to the negotiations table to conduct negotiations up to the end, for the future of Nagorno Karabakh and the entire region. War is no option at all.”

The President spoke also of the cybersecurity issues and underlined that in the framework of Nagorno Karabakh-Azerbaijan conflict major cyber attacks took place. “Cyber wars today have become a reality and they are everywhere, as, for instance, the use by Azerbaijan of Turkish and Israeli drones. They all are related to cybersecurity. I believe it is as important as nuclear threat during the Cold war. Cyber attacks can also pose threats from the nuclear point of view. Nuclear security was mentioned here. As an Armenian and the president of Armenia, I am extremely concerned by the claims of the Azeri side that if the war continues they would hit the Armenian nuclear power station. This is absolutely unacceptable because a small conflict around Nagorno Karabakh can become a regional and global disaster, another Chernobyl, if they strike the nuclear power station. Not only Armenia will suffer but all around. And they can strike not only with mechanical but also electronic weapon, through a cyber attack.”

President Sarkissian underscored that in the future, developments must be based on human values. “There are precious things in our life which do not change in time or space. And they are based on the values, on our constant human values.”

Recapping the discussions, President Sarkissian expressed hope that if though the conference was, it was still a contribution to starting a discourse on what’s going on in the world, and how we will live tomorrow.

In the context of new global challenges, at the Summit stressed was the importance of the role of food security, education, and healthcare, discussions unfold on the prospects of development of these areas.