Be confident and brave; remember that you are Armenians: spouse of the President Nouneh Sarkissian had a video conversation with students and tutors of the St. Stepanos national college in Boston 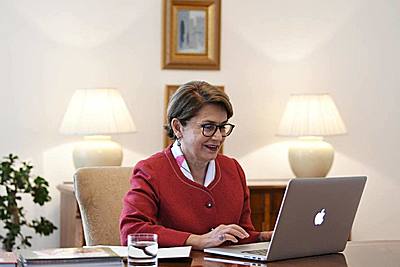 The spouse of the President of Armenia Mrs. Nouneh Sarkissian had a video conversation with the students and tutors of the St. Stepanos national college in Boston.

The college is 36 years old and has close to 170 students. At the elementary school, which teaches from pre-school to the fifth grade, Armenian language and history are taught in Western Armenian, textbooks too, are in Western Armenian. During a video call, which was initiated by the editorial staff of the “Haykashkharh” site for young people in Western Armenian, Mrs. Nouneh Sarkissian first conversed with students, responded to their questions which related mostly to the literary career of the author for children Nouneh Sarkissian, the books she loves, and interests. The spouse of the President presented her books to the students and noted that kids are the source of her inspiration and promised to send some of her books to the college.

“Always remember that you are Armenians and you all are very special for us. Be confident and brave: Armenians are a very important nation in this world because we are one of the most ancient people and unlike other ancient peoples, which disappeared, we reached the 21st century. Take good care of your health, love yourselves, you are very nice, have no doubt about that. Every child has a talent, sit sometime with no TV or computer and think what your strongest feature is. Keep on learning everything, but find your most talented spot and work diligently on it. Family members are your assets: appreciate always their being there,” the spouse of the President said, addressing the students.

In the conversation with the tutors of the college, discussed were issues related to the preservation of Western Armenian language, difficulties of distant learning, keeping kids’ minds active during the state of emergency. The teachers also informed that the annual two-week journey to Armenia has been postponed because of the pandemic and will take place next year.

Mrs. Sarkissian urged the teachers to be strong and carry on with their work and mission. She expressed confidence that after this difficult period has ended, the relations with the Fatherland will become closer.