The King of Jordan sent a message from Yerevan on “Religion and Tolerance: “The Saint Karapet Armenian Apostolic Church in Jordan is the testament to the enduring Armenian history in our country” 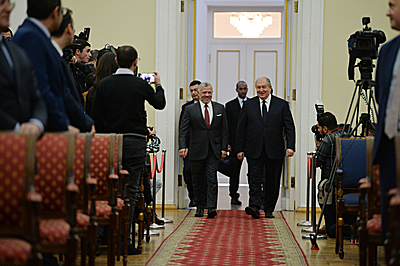 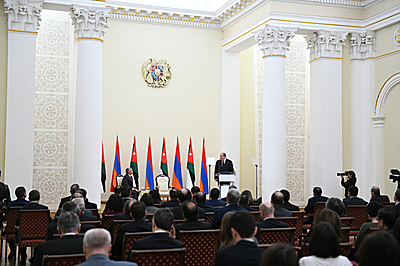 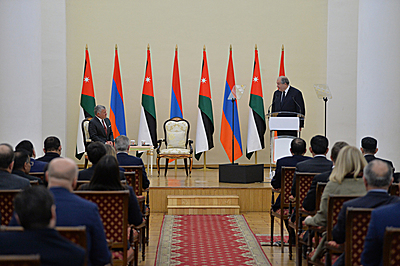 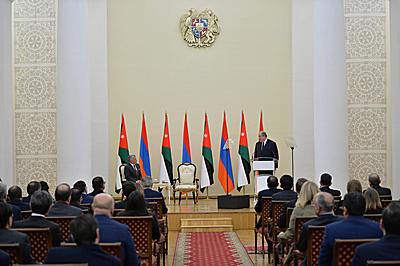 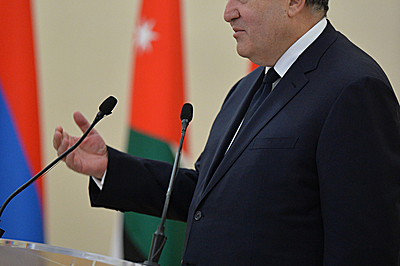 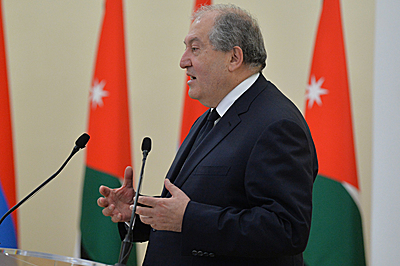 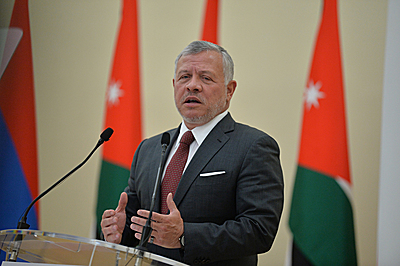 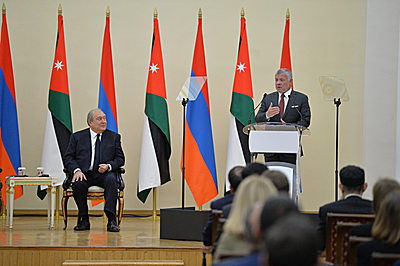 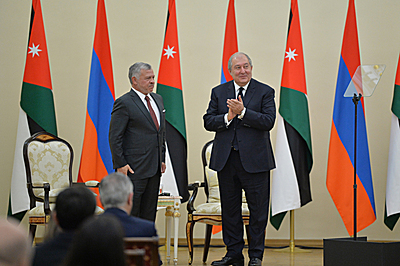 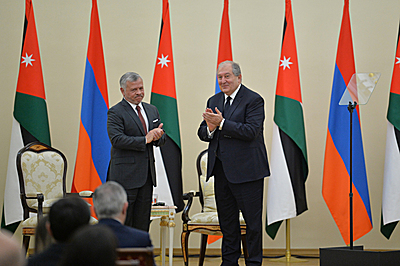 The King of the Hashemite Kingdom of Jordan, His Majesty Abdullah II Al Hussein All Hashimi, who is in Armenia on official visit, at the Presidential Palace in the presence of the official delegations of the two countries, local and foreign diplomats, heads of international organizations, and Orientalist scholars sent his massage on the topic of “Religion and Tolerance.”

Earlier, President Armen Sarkissian in his statement assessed the visit of His Majesty to Armenia as historic and as an Armenian expressed his gratitude to the people of Jordan and King’s family, “Everyone remembers that your grand grandfather appealed to Arab people to give refuge to the Armenians who had survived the Armenian Genocide. And I, on behalf of my people, would like to express my deepest gratitude.”

The President also informed that they had a wonderful discussion with His Majesty, spoke about potential for cooperation between the two countries and peoples in the areas of tourism, education, science, technologies, security, food security, and agriculture.

His Majesty Abdullah II on behalf of the Jordanian delegation expressed gratitude for the warm welcome. ”Yerevan, one of the world’s oldest cities, is yet a vibrant and young city,” the King said. “It reminds very much of my own beloved Jordan. Our two countries and peoples have in the contemporary world their unique place, all the while remaining true to our identities, the cultures, and faith. And Jordan, much like Armenia has made its human capital the main driving force in its journey towards development. Our countries have much to gain from cooperating, to capitalize on this promising potential.

Although this is our first official visit to your beautiful country, we feel like we are a family, and, in fact, we are a family. These bonds are dating back hundreds of years. My grand grandfather, as you mentioned, Mr. President, commanded to love God and love our neighbor and gave refuge to the Armenian Christian families. My grand grandfather, my grandfather, my father and me, helping those, who are desperately in need understood that it is the only option. It is a duty that Jordan continues to live by. Thousands of Jordanian trace their roots back to Armenia. They are an honor to both our countries and play a vital role in the arts, education, public service, business and much, much more. And they form the solid bedrock on which our friendship continues.”

King Abdullah said that the Hashemite Kingdom of Jordan was preparing to celebrate its first centennial, “We look back fondly and proudly on the role that the Jordanians of the Armenian descent and all Jordanians have played working for progress and prosperity of our homeland,” he said. “But our joint history extends far beyond that. Armenians in the Middle East are part of the oldest Christian community of the world. They are an inextricable part of our past, and we look forward to working with you to make sure they continue to play such a role in shaping the present and the future.

Saint Karapet Armenian Apostolic Church in Jordan stands at the christening site of Jesus Christ on the banks of Jordan river. It is the testament to the enduring Armenian history in our country.

The Armenian quarter in Jerusalem has been part of the city for centuries, and the Armenian Patriarchate along with other churches has been under Omar’s protection. A tradition of Christian and Muslim coexistence dates back over thirteen hundred years. This heritage continues today at the Islamic and Christian holy sites. This is a duty I am carrying proudly. And I am especially proud to be responsible for the holy sites of the Armenian Patriarchate of Jerusalem. Jerusalem holds great historic significance not only to me and my family; the city is holy to the three monotheistic faiths, and they all have a stake in safeguarding the spiritual, peace and co-existence that it symbolizes. We cannot let the Holy City turning into a city for violence and division. So preserving the city’s identity, its legal status as well as historic status quo in relations to holy sites, Islamic and Christian alike, is of critical importance. We look to Christian leaders and friends like you all over the world in safeguarding Jerusalem as a unifying city of peace. I have spoken today of our old friendship which has rich history.

Jordanians of Armenian descent have been creating for the last 100 years an exemplary story of friendship and proved that friendship and, certainly, brotherhood always win.

So, I hope that days and months ahead we can write a new chapter together, a chapter that builds upon friendship that began so long ago, new partnership and promise for all our people.”