Glory to the Armenian letters and schooling fresco has been restored through the assistance of President Armen Sarkissian: President Sarkissian and Mrs. Sarkissian visited the St. Mesrop Mashtots Church in Oshakan 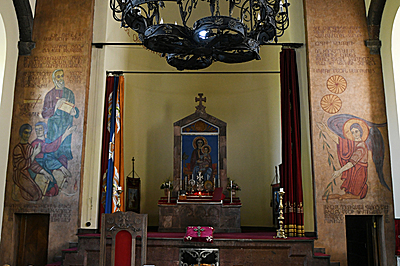 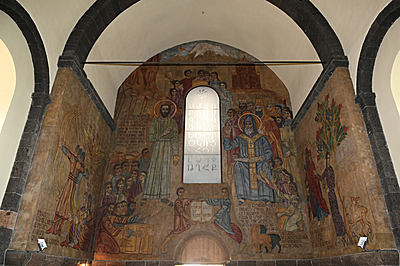 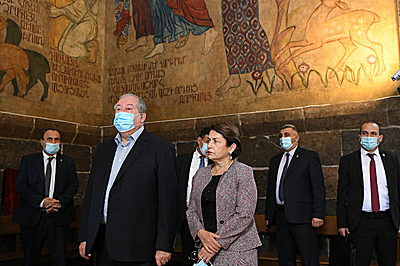 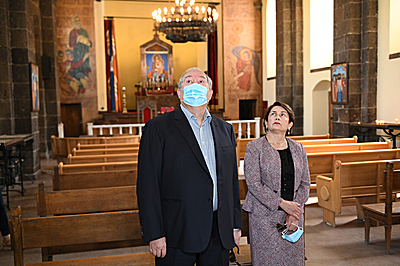 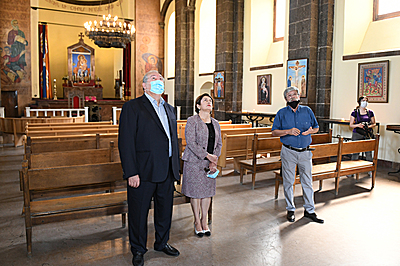 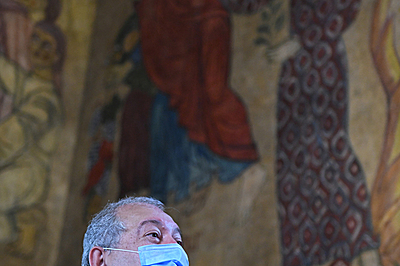 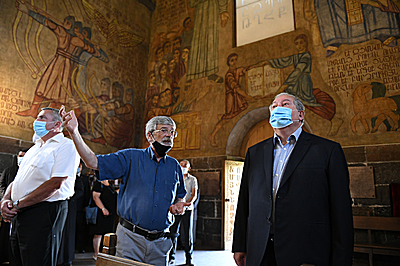 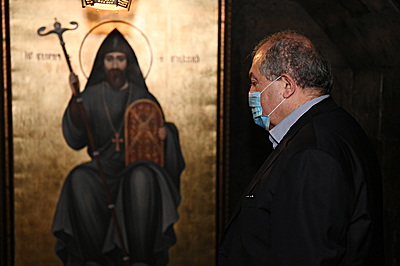 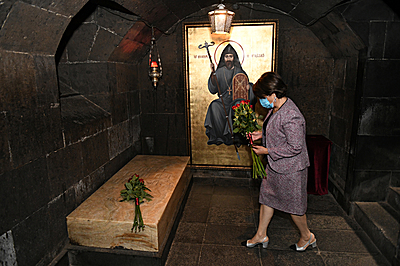 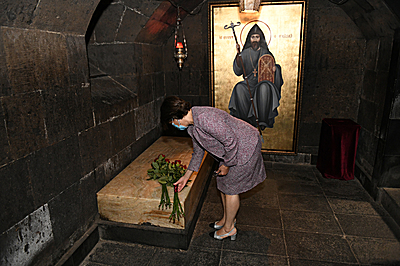 The fresco named the Glorious Armenian Letters and Schooling has been restored through the assistance of President Sarkissian.

The request to assist in the restoration of the fresco was submitted last year to the President of Armenia by the Aragatsotn Diocese of the Armenian Apostolic Church. One of the best creation of the Armenian monumental art of the 20th century, this triptych fresco was authored in 1964-66 by the artists Hovhannes Minassian and Henrik Mamian. Through the years, the fresco was considerably damaged by the humidity; in some places it crumbled, a layer of dust darkened and bleached the colors of the fresco. Arzhanik Hovhannissian - the head of the Scientific and Research Center of Fresco Restoration, which carried out the restoration works, noted that the Glorious Armenian Letters and Schooling fresco is one of the best samples of the Armenian fresco painting of the 20th century. The Primate of the Aragatsotn Diocese of the Armenian Apostolic Church His Eminence Bishop Ter Mrktich Proshian and Vicar of the St. Mesrop Mashtots Church in Oshakan Ter Vigen Manukian thanked President Sarkissian for his commitment to save this piece of art and for completing the task. Heirs of the authors of the fresco Martin Minassian and Lusin Mamian noted that they were enthusiastically following the process of restoration. Martin Minassian expressed thanks to President Armen Sarkissian, Aragatsotn Diocese of the Armenian Apostolic Church, and the experts and said, “The group of devotees, headed by Arzhanik Hovhannissain, has done splendid work.” “Our parents created this piece with love and dedication, and for us, the heirs, it is very important that it’s been restored. I believe all those, for whom the Armenian culture, its development and preservation are important, will also be grateful,” the daughter of Henrik Mamian said.

St. Mesrop Mashtots Church in Oshakan was built in the 19th century, on the tomb of Mesrop Mashtots. The fresco named the Glorious Armenian Letters and Schooling is in line with the Armenian traditions of miniature painting, medieval sculpture and frescos. On the western wall Mesrop Mashtots is depicted, with the newly created alphabet in his hand. The arched window divides the fresco in two. The Armenian alphabet is shown on the glass in the opening of the window. In the framework of restoration works, a new lighting system was also installed to provide for the full visibility of the fresco. Certain restoration works were conducted also on the Madonna with the Child picture near the altar (author Hovhannes Minassian).

President Sarkissian stressed the importance of preserving the fresco and noted, “It is so beautiful that even for a regular Sunday liturgy one would come from Yerevan to see it. Liturgies here carry a special, deep meaning, they have had and always will. I congratulate us all… There are a number of things here: God’s word and spirit, our culture, our literature, translator’s art, art of painting. This is a very special place. Maybe this will serve as an example, and we will restore frescos in Armenia because this quality, these colors, and this richness are not to be found anywhere else. Thank you all.”

President Sarkissian and Mrs. Nouneh Sarkissian laid flowers on the tomb of Mesrop Mashtots and then visited the museum, toured it and the park of letters, observed the foundation of the church built by the prince Vahan Amatuni in 443 which is preserved under the glass.