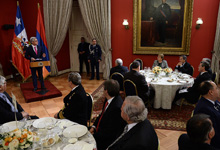 I consider it a great honor to arrive in the Republic of Chile on an official visit. It is the first time RA President has visited Chile since the establishment of diplomatic relations between our friendly countries.

I would like to once again present my appreciation to President Bachelet for her invitation and for the warm hospitality extended to me and the Armenian delegation. I am very grateful. Indeed, it will be a great honor for us, Mrs. President, to host you in Armenia.

Despite the long geographical distance between Armenia and Chile, the mutual trust, sympathy and respect between our peoples have not diminished. I am hopeful that from now on our interstate relations will enjoy ascending development resting exactly on this basis. It is largely symbolic that there is a square called “Armenia” in the Chilean Puerto Williams settlement where a monument brought from Armenia is installed.

Indeed, we can’t be satisfied with the present volume of collaboration; we have far greater potential and opportunities. We have arrived in Chile with the belief that it is time to give a new meaning to our relations. Taking into consideration Chile’s considerable economic success and achievements, particularly in the areas of foreign investments, capital inflow and unemployment reduction, the rich experience of your country can be instructive and useful for us.

There are a number of promising cooperation spheres between Armenia and Chile, including industry, agriculture, information and high technologies, seismic protection, health service and others. Bearing in mind the success of the Argentine investment projects in Armenia, I would like to assure you that geographical distance is not an obstacle at all. Armenia has created necessary prerequisites and favorable conditions for ensuring foreign investments and active business activities. The Armenian-Chilean first business seminar aimed at introducing Chile to the Armenian businessmen interested in the Latin American region was held in Yerevan one month ago. And I am sure that the implementation of successful joint projects will not make us wait too long.

I am also confident that in the 21th century geographical distance is not an obstacle to promoting tourism. We are proud that during his visit to Soviet Armenia the great Chilean thinker and the Nobel Prize laureate in literature Pablo Neruda wrote: “In the ancient world Armenians brought their national culture to the highest level. Yerevan is one of the most beautiful cities of the world which rises from volcanic tufa and is harmonious like a rosy rose.” I am confident that Chilean tourists will find many interesting things in Armenia; the same is true for Armenians visiting Chile.

The small Armenian community of Chile has its modest but at the same time unique role in reinforcing the Armenian-Chilean relations. Involved mainly in the spheres of industry and trade, the representatives of the Armenian community have made certain contribution to the economic development of this wonderful country. It is an undeniable fact that owing to the sincere attitude of Chile’s authorities and its people Armenians have managed to integrate into the country’s social and political life and have become law-abiding and respected citizens of Chile.

We attach great significance to the fact that our countries have taken similar positions and approaches on the issues of universal importance. The striking illustration of that was the official recognition of the Armenian Genocide by Chile in 2007. As a result, Chile not only won the sympathy and respect of all Armenians as an honest and reliable friend, but also reaffirmed its commitment to the values which belong to the entire civilized mankind. Among the goals of my visit, Mrs. President, is to express my deepest gratitude to you, your people and your authorities on behalf of our people for accepting this fact.

Concluding my speech, I would like to raise a toast in honor of distinguished Chilean President Mrs. Bachelet, who was first in many things. I served as Minister of Defense for a long time and met with one or two female minsters of defense, and there aren’t many female presidents as well. I wish you success to the glory of Chile and its diligent and wonderful people. I am raising a glass to the Armenian-Chilean friendship.